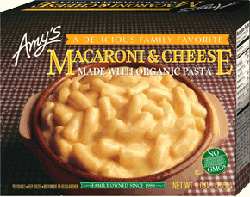 After last week's revisiting of meals from Lean Cuisine, one of our panelists noted that we last reviewed Amy's Rice Mac & Cheese back in 2009. Almost a year ago we did a head-to-head comparison between Amy's standard Macaroni & Cheese and their Light in Sodium Macaroni & Cheese. "How about a head-to-head between the gluten-free and the regular version?" she suggested.

As we did the last time we rated products this way, we started with the standard version. Comparing today's package with our review from last year, it would appear that this product hasn't changed: the numbers are the same at 400 calories, 16 grams of fat with 10 grams of saturated fat, 640 milligrams of sodium, and a paltry 3 grams of fiber. As per the instructions, we microwaved the meal uncovered for 4 minutes, stirred, and then put it back in for another two minutes. After a little more than a minute we took it out, however, as it seemed in danger of overcooking.

As before, this resulted in "yummy crispy bits" around the edges and a smooth, thick, "very cheesey" sauce. The pasta is nice and firm and the panel was inclined to move on to the next dish, until we passed the meal around the table again for second and third tastes. This time it did not fare quite so well. First, the sauce was reported to become "kind of greasy," which I chalk up to the 10 grams of saturated fat. That's one of the reasons I like to use reduced-fat cheddar in my Creamy Mac and Cheese recipe: it's less likely to separate and become greasy. Second, Amy's higher sodium level started to become more apparent: "the salt creeps up on you," one panelist said, making a face. The more they ate the meal, they explained, the saltier it tasted. At this point it would seem the lighter in sodium version would be a better bet.

Interestingly, the gluten-free Rice Mac & Cheese doesn't have the same instructions as the original version: this one directs you to put the meal on a microwave-safe dish, then cook for 3 minutes, stir, cook another minute, and allow to sit for one minute. We can only chalk this up to the rice pasta, as nothing else is different about the meal. And that's literally true: we compared the ingredients for both meals and the ingredient list is exactly the same and in the same order with the exception of one containing wheat pasta and the other containing rice pasta. (Indeed, one of the panelists pointed out that the package itself reads "...we covered the tender rice pasta with the same smooth cheese sauce that has made our Mac & Cheese so popular....") The Nutrition Information is also identical with the exception of the amount of fiber: only 1 gram of fiber in the gluten-free mac.

Theoretically, that would mean the exact same cheese sauce, right? Oddly enough, no: in practice the meal is a little different. This dish does not get crusty around the edges, but the sauce is certainly creamy, thick, and cheesey. But that's where the similarity ends. The good news is that the rice pasta doesn't shatter upon stirring, as we've seen in other reviews, but it doesn't have any bite whatsoever. "It's not mushy, it's just... without any texture at all," summed up a panelist. Worse, somehow the sauce is oddly grainy, as if it were made from a powder. This one we can no longer recommend - you're far better off having their Light in Sodium version, or better yet, taking a few more minutes to make yourself a big batch of Creamy Mac and Cheese (using gluten-free penne pasta if you need to), then freezing individual portions for later. You'll have the same thick, creamy, cheesey sauce without the fat and sodium - and you won't be wondering when it's going to go wrong.