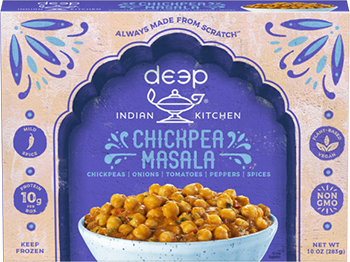 There are so many companies making frozen convenience meals that it just seems lazy to review another variety from a company we reviewed just last week. I'm speaking of Deep Indian Kitchen: last week we reviewed their Chicken Curry and Chicken Tikka Masala, both of which received positive reviews from our panel.

We return to Deep Indian Kitchen and Scott & Jon's because our local Rouse's grocery store carries a variety from each company that wasn't previously available to us. As a panelist explained, "It seems only fair to sort of make sure we've covered all the options."

We began today's tasting with the Chickpea Masala from Deep Indian Kitchen. This I consented to tasting with a lot of misgivings: in my opinion the numbers aren't just not very good, they're actively bad: this dish has 150 calories and 550 MILLIGRAMS of sodium along with 4 grams of fiber. That's a ratio of 3 2/3 milligrams of sodium to 1 calorie, and to be honest it shows: this dish is SALTY.

You could argue that there are extenuating circumstances: it says right on the packaging "For a complete experience, pair with our Potato and Pea Samosas & Tandoori Naan." Yet the aforementioned Potato and Pea Samosas have 210 calories per serving, 360mg of sodium and 3 grams of fiber, and the Plain Tandoori Naan has 260 calories per serving, 550mg sodium, and 2g fiber. That's a total of 620 calories and 1,460mg sodium, and it doesn't matter how much fiber is in the three items together, because NOBODY should be consuming 1,460 milligrams of sodium in a single meal.

What would make sense to me would be to serve the Chickpea Masala over unsalted brown rice, which would add about 170 calories but virtually no sodium, bringing the sodium to calorie ratio down to a much more reasonable 1.7: a total of 320 calories and 550 milligrams of sodium. It would also make the dish a complete source of protein.

With brown rice this would be a really good dish: I will warn you that despite the "mild" labeling, this is closer to "medium heat" or even "hot" (if you define "hot" as "making your nose run from the spice"). The chickpeas are tender, the sauce is thick and savory with onion and tomato, and it has a definite, but not overwhelming note of cumin. "This is a main course in search of a meal," opined a panelist. Thumbs up only if you serve this over unsalted brown (or white, if you must) rice.

(Tip: I will make a batch of brown rice without added salt just about every week and refrigerate it in individual servings. I'll use the rice for making fried rice some nights or I'll serve it alongside/under various recipes, like this week's Chicken Jalfrezi or Chicken Saag.) 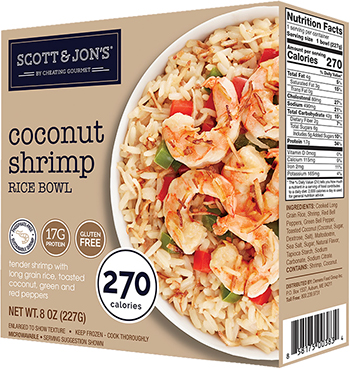 Given the name, some might expect shrimp coated with coconut flakes and fried: this is not that. Rather this is shrimp with a "creamy, coconut-ey sauce," that manages to stay on the savory side of sweet. There's some texture from the flaked coconut, "but crunchy this is not."

As with all of Scott & Jon's products, the 6 smallish shrimp are tender and sweet and end up cooked perfectly, while the green bell peppers added to the dish lend a much-needed bitter counterpoint to the sweetness of the coconut sauce.

The white rice is properly cooked into discrete grains: its minimal chewiness and absolute lack of stickiness makes it seem like par-boiled rice. Overall, the panel wasn't particularly excited about it - "There are other frozen shrimp dishes I'd sooner eat again," opined more than one panelist - but if you like coconut sauce on your shrimp, you'll likely enjoy this.