Kashi has a really good track record here at Dr. Gourmet, so I was particularly pleased to spot a new variety in the freezer case. We do try to review two varieties from the same company in our weekly reviews, but to my disappointment this was the only new (and acceptable) variety I could find.

However, as I continued down the freezer aisle I did see a brand that's new to us: PJ's Organics. They focus exclusively on organic, hand-rolled burritos and are based in Northern California. After such a good experience with evol Foods and their mini burritos, I thought, "Why not?" and selected their Traditional Chicken Burrito for review.

Oddly enough, the packaging states that "for best results defrost overnight in fridge & microwave." If I'm going to think ahead enough to put my burrito in the fridge the night before in order to defrost it, why would I be eating a frozen burrito? The instructions do admit that one can microwave the burrito from frozen by wrapping it in a paper towel and doubling the cooking time to 4 minutes - flipping the burrito over halfway through cooking.

The burrito smells great while cooking, but as you might expect, the tortilla gets a little hard. Regardless, there seems to be a generous amount of filling in this 5-inch burrito with good, spicy cumin and chili flavor to the chicken. Unfortunately, the black beans in this burrito seem to suffer from something like freezer burn: they break open showing a dry, white interior that adds nothing to the flavor and actually helps dry out the filling. Further, the Monterey jack and cheddar cheeses mentioned prominently on the label aren't visible (or tasteable) at all. Given that this burrito contains 380 calories, only 4 grams of fiber and 580 milligrams of sodium, I have to give this one a thumbs' down. Too bad. 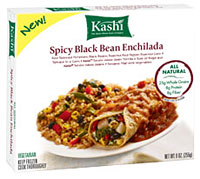 The Kashi Spicy Black Bean Enchilada meal, on the other hand, is just as good as I had hoped. This is an enchilada containing a mildly seasoned spinach, red potatoes, roasted corn and black beans mixture wrapped in a very traditional, soft corn tortilla. It's topped with a really flavorful and spicy tomatillo and lime sauce. The Kashi seven grain, rice and bulgur pilaf includes roasted red peppers and strips of roasted poblano peppers, making this a fairly spicy dish. Still, it's hearty and quite frankly one of the best frozen meals I've had in some time. It's even better when you compare the numbers with the PJ's burrito: the Kashi has only 260 calories (120 less than the burrito), with slightly more sodium (600 milligrams in the Kashi versus 580 in the burrito), and twice the fiber in the Kashi meal at 8 grams.

If you're a fan of spicy foods, definitely get the Spicy Black Bean Enchilada for your freezer. And pass on the PJ's Traditional Chicken Burrito - you'll get tons more flavor for your calorie buck with the Kashi.