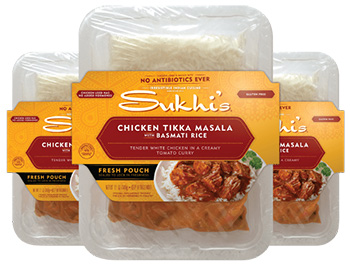 They caught my eye not only because of the bright yellow/orange and pink label, but also because other than a couple of pizzas, they were the only non-Whole-Foods product in the section.

Instead of being frozen, these meals are presented with the rice and the topping sealed into separate plastic bags, then packaged into a rectangular plastic tray and the whole sealed with plastic wrap. To serve, you pour the contents of the plastic bags (entree on top of rice) into the tray, then microwave for about 2 minutes or so.

You'd expect that this would yield a fresher-tasting product, and it's definitely the case: these taste "nearly fresh." The only difference between the two meals is the sauce: both include the same white basmati rice (which clearly had been almost perfectly cooked when it went into the package) and about 1/4 to 1/3 cup of sauce over some surprisingly large pieces of white meat chicken.

That chicken is impressively tender, "not tough like most microwaved chicken." In fact, the panel thought there could have been less chicken in each meal: "For lunch they could cut back on the meat and put in a bunch more veggies," they said. "Right now it's just chicken, rice, and sauce." 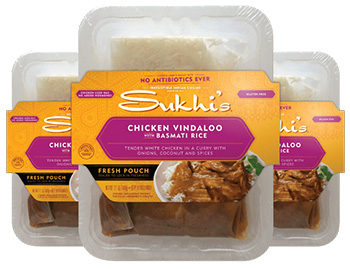 Fortunately the panel had chosen to taste the Masala before the Vindaloo. "It [the Vindaloo] might be spicier," they said. One panelist was dubious: "Probably not. It doesn't say 'spicy' on the package, and even when it does it's not hot."

Be aware that despite the lack of warning or any sort of heat indicators on the packaging, the Vindaloo is as spicy as it might be in an Indian restaurant: enough to make your nose run (I break into a sweat). The meal has the same rice, the same chicken, and nearly the same numbers (240 calories, 480mg sodium, 1g fiber), but much, much more flavor - not that the Masala was lacking flavor by any means.

At first the panel thought there wouldn't be enough sauce for this dish, but after stirring the sauce into the rice, we decided that "it's a good thing there isn't more sauce or I'd need more water," as one panelist put it. That sauce might be a little grainy, but on the whole both meals are excellent.

We would have liked to see them use brown basmati rice for the sake of more fiber (yes, there is brown basmati rice). We also would have appreciated more vegetables and a little less chicken, for two reasons: first, because it would have rounded out the meal, and second, because it would have cut the food cost (vegetables are cheaper than chicken, after all). These babies cost us $7.99 each - which is easily enough to buy all the ingredients to make your own Chicken Vindaloo or Chicken Tikka Masala and have more than one serving of each.