A few weeks ago my wife saw an ad for a food delivery service we hadn't seen before: EveryPlate. They bill themselves as "America's best value meal kit," charging $4.99 per serving. It's been a while since we reviewed a meal delivery service, and in these pandemic times people might be more inclined to use these services in lieu of going to the grocery store themselves.

So my wife signed up for us to receive a shipment of 3 2-person meals, only to find that right off the bat the company performs a bait-and-switch. Before making the purchase my wife looked carefully at the recipes listed under the next week's "weekly menu" tab on their website. She noted that there were three recipes that did not include wheat-containing ingredients and entered her credit card information.

You don't make your official recipe selections until after giving them your money, you see. Imagine my wife's dismay when it came time to choose the three recipes she wanted to have delivered, only to find that only 1 of the three non-wheat-containing recipes were actually available to order for the week.

According to the website, there were, however, three recipes the following week that we could choose safely, but no option exists to skip the first week - at least that my wife could find. Desperate, she tried to cancel the whole thing, and then the site offered her the option to skip a week. That promised to work out perfectly: no delivery the first week, when we had only 1 dinner option I could eat, but for the following week there were three dinners that did not contain wheat.

Great! My wife selected three dinners without wheat-containing ingredients and we were set to receive our first package two weeks later.

Except we received a package for the following week containing two recipes I couldn't eat (and one I could) - and none of which my wife would have selected in any event. Okay, we can work with what we received - my wife doesn't have to eat gluten-free, after all, and for one of the recipes we could substitute gluten-free panko crumbs to make it gluten-free.

My wife went to the website to get the nutrition information for the recipes we received, only to find that once again the meals we received were not listed in that dated week's options. The FAQ page claims that the nutrition information and instructions for each week's recipes by date could be found on the appropriate weekly menu page on the website. Nope. We wrote to EveryPlate's nutrition staff to request that information, and they very kindly responded with screenshots of the appropriate Nutrition Facts labels.

We were impressed with the quality of the vegetables they sent us: all were fresh and crisp, from the scallions (not shown) to the green bell pepper and zucchini. The scallions (otherwise known as green onions) were packaged in sets of 2. Despite the fact that the two recipes that called for green onions only called for 1 each, we received 2 packages of 2 scallions. 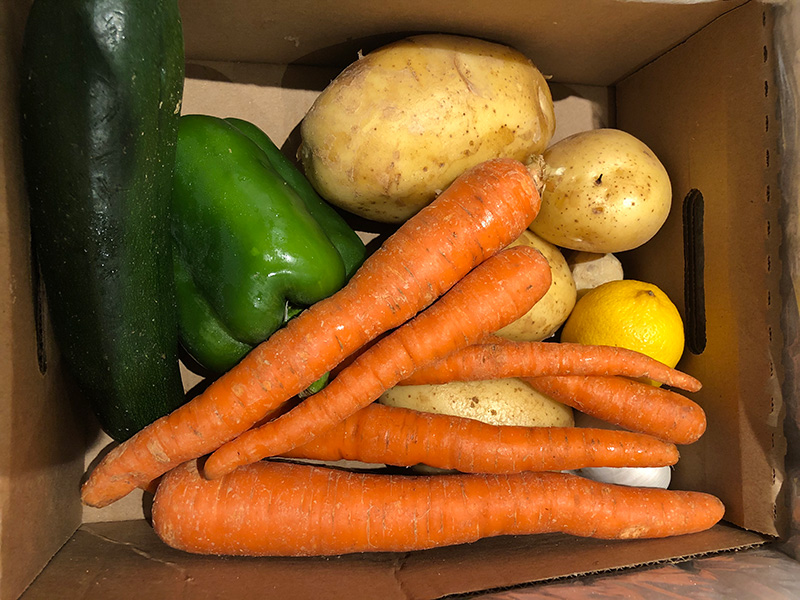 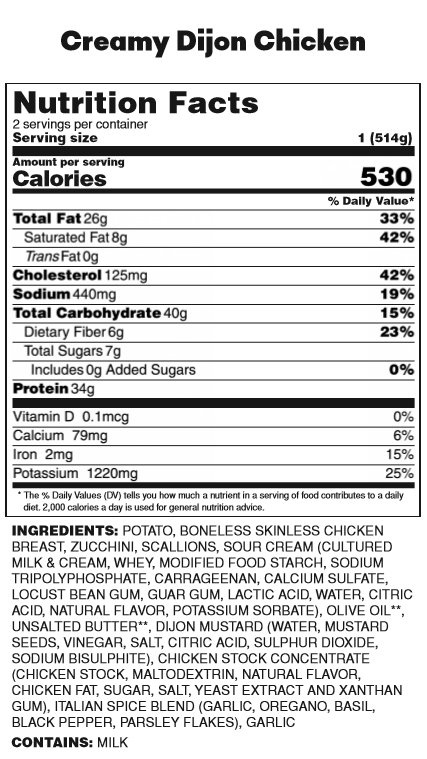 For 2 servings we received a package that contained:

•  1 package of 10 ounces of chicken breast (with Serving Size listed as 4oz and the package's Servings Per Container listed as 2.5)
•  about 12 ounces of Yukon Gold potatoes
•  1 medium zucchini
•  a head of garlic (clearly intended to be used for all recipes; we used 1 clove for this dish)
•  a packet of scallions, containing 2 scallions (the recipe calls for 1 but so does another recipe; why send us 2 packages? so we used 2 scallions)
•  a packet of Italian Seasoning, approximately 1.5 teaspoons of a mixture of what smelled like dried oregano, dried basil, garlic, and parsley
•  a packet of something labeled "Chicken Stock Concentrate" which contained about a Tablespoon of a thick brown liquid
•  1 packet of a Tablespoon of sour cream, conveniently labeled "HelloFresh" (isn't that interesting)
•  a packet of about 1 teaspoon of Dijon mustard

The instructions further state that "What You'll Need" includes unspecified amounts of kosher salt and black pepper along with 5 teaspoons of vegetable oil and 1 Tablespoon of butter.

To actually cook the dish you dice the potatoes, slice the zucchini and scallions, and mince the garlic. You are instructed to rinse and dry the chicken and season it with half of the Italian Seasoning and then add an unspecified amount of salt and pepper.

Place the potatoes on a baking sheet with an unspecific amount of oil ("a large drizzle"), more of the unspecific amount of salt and pepper, and the rest of the Italian Seasoning. These roast at 450F for 20-25 minutes, and once they go in the oven are never touched again: no stirring, nothing. We cooked these for 22 minutes.

Next the sliced zucchini are sauteed on the stovetop with "a drizzle of oil" along with more of the unspecific amounts of salt and pepper. Once browned, they are removed from the skillet and are set aside.

In the same pan is added another "drizzle of oil" and the chicken breasts are added to the pan, where they cook for 5-6 minutes per side (we cooked them for 5 minutes each as they were a bit on the thin side). The cooked breasts are transferred to a cutting board to rest before slicing.

In the same pan is again added yet another "drizzle of oil" to which is added the whites of the scallions and the minced garlic. The stock concentrate is added along with 2 Tablespoons of water (if they didn't need the stock to be concentrated then why add water?). The pan is removed from heat and you add the packets of sour cream and mustard and a whopping 1 Tablespoon of butter, which you mix together until the butter is melted.

Plate the potatoes and zucchini, slice the chicken, and add the sauce. 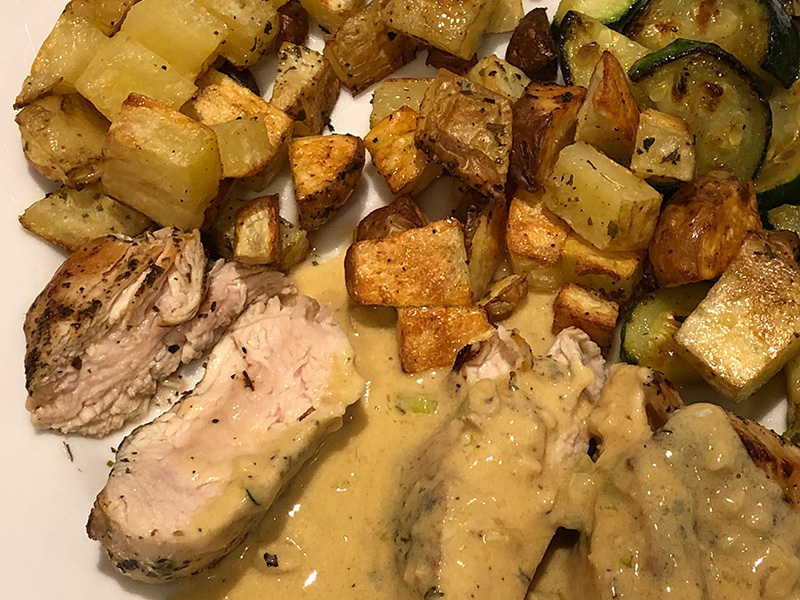 This isn't too terribly bad. One of the chicken breasts wasn't done (it's still pink in the middle and therefore not safe to eat without further cooking), the zucchini is a bit overdone, and potatoes are just OK. But the whole tastes pretty salty.

We contacted the Nutrition folks at EveryPlate and asked if their calculations included the amounts listed in the "What You'll Need" section, and the answer is that their nutrition information includes those amounts that are specified on the card (for example, 5 teaspoons of oil are listed as included in this recipe) but not the salt amounts, for this reason:

For salt, only when a "large/big pinch of salt" and/or a quantified measurement of salt is instructed to be used in the recipe is it included in our nutrition analysis. All other mentions of salt use are not.

Our calculations for the meal, including the times that you are instructed to add salt, are as follows: 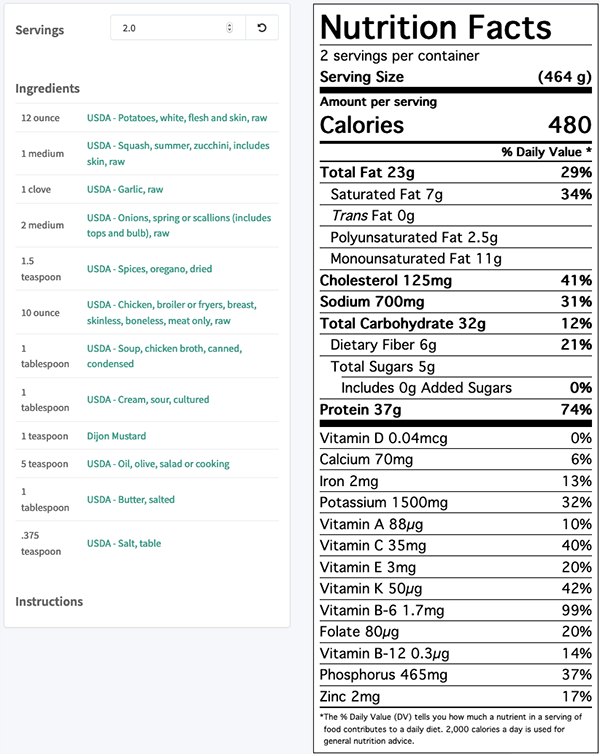 (Note: we use FoodCare for our nutrition calculations.)

Considering that we can't know what was in the "Chicken Stock Concentrate" exactly, I would say ours is probably a good approximation of what's actually in the dish - and it's likely that the sodium in our estimate is less than the reality because of that Chicken Stock Concentrate. Clearly there are differences in fats, but the biggest difference is in the sodium. You simply can't look at the Nutrition Information listed on the EveryPlate website and depend on that being what you're actually going to eat, because it's simply not accurate and they know it.

This meal wasn't bad in terms of flavor - just a bit too salty. I'm concerned about the questionable ingredients (I find the "yeast extract" in the Chicken Stock Concentrate to be suspicious), and this won't be the first time we'll see suspicious ingredients in an EveryPlate (I mean, HelloFresh) dish.

Make this dish at home: Honey Mustard Chicken with Herbed Zucchini and Roasted Potatoes will have about the same number of calories as the EveryPlate meal but only 571mg of sodium and 13 grams of fat.

Wait until next week when we review their Kung Pao Beef Bowls.