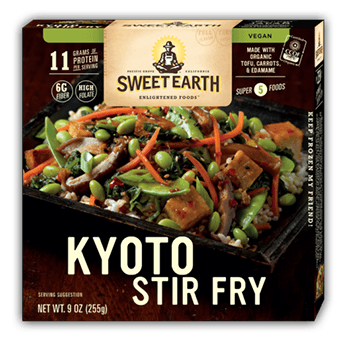 At the start of each tasting session everyone examines the packages. "Haven't we done these already?" asked a panelist.

We first discovered Sweet Earth Foods in 2014 because of their breakfast burritos (both excellent, by the way). About a year later we found some of their other burritos, including The Kyoto Burrito and The Curry Tiger Burrito, followed by others (The Peruvian Burrito and The Santa Cruz Burrito, etc.) shortly thereafter. Sweet Earth's burritos have all been good - yes, all of them.

That's darn impressive for any frozen food company. A local Creole taqueria, Juan's Flying Burrito, will serve you their burritos in a bowl instead of a tortilla, so it would be reasonable to assume that today's bowls would be the contents of their excellent burritos served in a bowl. Right? Well, you know what assuming does, so rather than assuming, we put them to the test.

The Kyoto Stir Fry (270 calories, 590 milligrams of sodium, 6g fiber) is a bowl of sauteed spinach, tofu, edamame, snow peas, and shiitake mushrooms over a bowl of brown rice. On peeling away the film, the first look might be unimpressive: a smallish pile of dark green sauteed spinach is topped with about a tablespoon of bright green edamame, chunks of light brownish-grey tofu, and dotted with three "wilted-looking" snow peas atop a bed of short-grain brown rice. The whole is sprinkled with sesame seeds for garnish. One panelist noted, "Looks kind of boring."

After a taste, they added, "but it's not." You don't see them at first glance, but the shiitakes are certainly there and lend their umami flavor to the dish, as does the soy sauce and the tofu. That tofu isn't rubbery and overcooked, but tender, although the julienned carrots could stand to be a little less well-cooked. There's still plenty of crunch from the (yes, a little overcooked) snow peas as well as the edamame, and the rice is cooked "nearly perfectly," with distinct grains and the nutty flavor of brown rice.

"It's restrained," decided a panelist. "They let the ingredients speak for themselves." The panel agreed, noting that "it's even a little spicy - the spice creeps up on you." In short: "Nothing to complain about here." 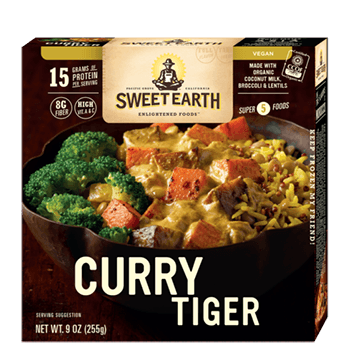 It's a good thing that we read the instructions on every package: the Curry Tiger Bowl (370 calories, 450mg sodium, 8g fiber) says "For best vegetable quality, please remove lid entirely and cover with paper towel while microwaving." We did. As you'd expect, this resulted in bright green, crunchy broccoli - perhaps a quarter-cup in all. We were impressed with their foresight.

Even more impressive is the flavor. This bowl comes out of the microwave with an alluring yellow curry scent and the meal delivers on that promise. At first we thought we might be disappointed: we thought there might not be as much sweet potato as there appears to be on the front of the package. (We're well aware that foods hardly ever look like the front of the package, but that doesn't mean we shouldn't expect truth in advertising.)

After stirring the dish we realized that the curry seitan in the dish is cut into almost exactly the same size dice as the sweet potato and there's about the same amount: what you see on the front of the package is half seitan. "That's okay; they both taste good," said the panel. The seitan has an assertive, coconut curry flavor while the sweet potato is both (ahem) sweet and savory. It's not cooked into mush, either - the whole dish has "great texture," according to our panelists, with the quinoa and lentils almost crunchy, the broccoli "definitely crunchy," and the seitan firm and "meaty."

The spice in this bowl "also sneaks up on you," warned the panel: the curry sauce here reminded us of curries from our favorite Indian restaurants. One caveat: this has 20 grams of total fat and 11 grams of saturated fat, likely from the coconut milk used in the sauce. (If I were making this at home I'd use the reduced-fat ("lite") coconut milk to reduce the amount of saturated fat.) Even so, the panel declared this meal "one of the best frozen meals we've ever had."