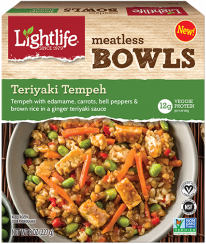 I found the 'Meatless Bowls' on offer today from Lightlife at my local Winn-Dixie for $2.29 each. The name rang a bell, but I couldn't remember why or where I had encountered that brand before until I went home and searched my records.

That said, on paper (or is that "in the box"?) these look good: both are 280 calories or less, have under 550 milligrams of sodium, and have an impressive 6 grams of fiber. On the other hand, they're made with tempeh, which prompted some questioning from our panelists: "What's tempeh?" they wanted to know.

Tempeh is a protein that originates from Indonesia, and like tofu, which originated in Greater China, is made from fermenting soybeans. Tempeh tends to have more protein and fiber than tofu (although like all foods, the amount of protein and fiber can vary), and has a denser consistency than tofu, which can be soft enough to scramble like an egg or firm enough to fry. In today's bowls Lightlife has used diced tempeh in place of animal protein: the Teriyaki Tempeh Bowl has its tempeh cut into 1/2 inch cubes while the tempeh in the Mediterranean Tempeh Bowl, despite the picture on the package, is a much smaller dice.

We began our tasting with the Teriyaki Tempeh Bowl. The bowls call for 3 minutes in the microwave, then direct the user to uncover the meal, stir, and continue cooking (microwaving) for another minute or so. What's not clear is whether you should re-cover the dishes: we figured if the directions didn't specify re-covering, we wouldn't.

At first this seemed like leaving the dish uncovered might have been a poor choice: the Teriyaki Tempeh doesn't have nearly as much sauce as we (the panel) expected: it's barely enough to color the ingredients. Perhaps leaving it covered would have prevented the sauce from evaporating; we don't know.

It does, however, have a fine ginger/soy scent, and if there's not as much sauce as we expected, that's also fine: the sauce seems well balanced between sweet and savory and doesn't overpower the other ingredients. In fact, it might be a little on the salty side: it certainly isn't as overpoweringly sweet as so many other dishes that include teriyaki sauce can be.

The brown rice has a fine, nutty flavor and is overcooked enough that "people who like white rice will like it." Julienned carrots might be a touch overcooked, but still provide some texture, and the tempeh is "definitely meaty-textured." Those with GERD might find it useful to note that this has no spiciness at all: it has plenty of umami from the tamari sauce, and probably some acidity from the bell peppers, but all in all this is a "very tame" teriyaki meal. Overall, the panel voted to recommend it: "It could use more sauce but it's plenty flavorful by itself." 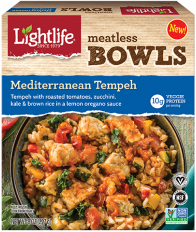 The scent of the Mediterranean Tempeh Bowl split the panel: the strong scent of oregano alarmed some and encouraged others. It's described as "Tempeh with roasted tomatoes, zucchini, kale & brown rice in a lemon oregano sauce," and that description, the panel found, is not wholly accurate: in short, "It's brown rice in a VERY lemony tomato sauce with oregano" (and some kale and zucchini - and that's about all that is worth saying about the kale and zucchini).

Not that it's a bad thing. Sure, it's not a lemon-oregano sauce - it's definitely a TOMATO sauce with lemon and oregano - but that tomato sauce is bright and tart and strongly flavored of oregano, and to be honest, we've had tomato sauces that were labeled "tomato sauce" and weren't nearly as flavorful. This sauce might seem a little salty, but lemon juice is often used to brighten flavors in place of salt and this is a good example of using lemon in place of salt - whether it's done intentionally or not.

Oddly enough, this dish had what seemed to the panel to be "enough" sauce, meaning that stirring the dish didn't result in "dry but colored" rice - and lent a bit of moisture to the dish as a whole.

The brown rice in this dish is essentially the same as that in the Teriyaki Tempeh Bowl - overcooked but still substantial - and the tempeh is in a much smaller dice than the Teriyaki Tempeh. This contradicts the picture on the front of the package, but overall the panel didn't mind: "It might not be pasta with sauce, but the brown rice makes it seem that way and it's better than a lot of other [frozen pasta] dishes." Overall? "Tasty. I'd eat it again."

Read all reviews of Lightlife products »