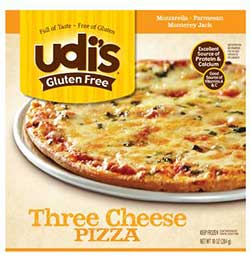 I am seeing Udi's products more and more often. As their product line expands they seem to be everywhere. Not just in stores, but I even had a single serve Udi's roll on the tray of an airline meal recently.

The last time we reviewed their pizza it was their Margherita Pizza and it was not only bad but high in sodium. We had left their Three Cheese Pizza in the freezer case because it came in at over 800 mg for a half of a small personal pizza.

They have changed everything (I wonder if someone out there must actually be reading our columns)(Nah....). The new version comes in at 330 calories and only 330 mg of sodium for a half of a reasonably sized pizza. Even the packaging is more appetizing and the pizza out of the box is too. We baked this as per the instructions in a conventional oven at 400°F for 12 minutes. Usually I use a pizza stone even for our frozen pizzas but it specifically says not to.

After baking the pizza, it still looks appetizing and it is light years ahead of where they were a couple of years ago. The crust is thin and crispy, the topping far more sophisticated than their previous elementary school tomato sauce flavor and there is a good buttery flavor to the crust. As frozen pizza goes, this is one of the best, even if you are not eating gluten free.

Their new version of pepperoni pizza is more encouraging than the previous one, but the half pizza serving still comes in at 450 mg of sodium. We chose to review it because there are times when you have the craving for pepperoni pizza and we were encouraged by the taste tests with the more reasonable cheese pizza. This is not as good as that pizza and is unreasonably salty. There is good pepperoni flavor, but it is simply overwhelmed by the salt. Even removing the pepperoni doesn't help. For some reason the sauce is not as good as the cheese pizza and the crust never crisped up and came out of the oven like a pizza from the county fair.

Bad pizza in every way. At least they have gotten half way there with the cheese pizza.