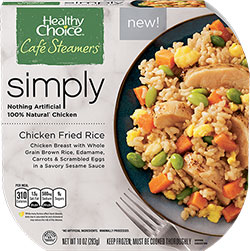 It's hard to believe that in the decade-plus that we've been doing food reviews, we've tested over 50 frozen meals from Healthy Choice. (We've done over 70 from Lean Cuisine.) But their track record with us isn't very good at all: only 20 of those got a thumbs-up from us, and some of the meals are really bad.

This week's appearance of two Healthy Choice meals was prompted by my wife, who spotted them at our local Winn-Dixie. This "Simply Cafe Steamers" line is labeled "Nothing Artificial" and touts "100% Natural Chicken." They're still part of their Steamers line, however, with the food cooked in what is essentially a colander inside a slightly larger bowl containing the sauce. One of my objections to these has always been the amount of plastic required to make them: not everyone has access to recycling facilities. The other problem is that not everything can be steamed and come out properly cooked.

That said, sometimes this cooking method does work - and works well.

The Chicken Fried Rice has 310 calories, 580 milligrams of sodium, and a surprising 4 grams of fiber. As it came out of the microwave, one taster noted, "It actually smells fresh." That's likely due to the aroma of the ginger and garlic in the sauce: it's as sharp as you'll get mincing fresh garlic for your own meals.

I was surprised to see that this is actually made with brown rice, which appears a little over done. The fairly large chunks of chicken were reported to be tender and have a freshly-cooked, savory chicken flavor. As always, the edamame (soybeans) hold up well to steaming, although the carrots, cut in a large dice, were not as crispy as the panel would have wanted. There's even visible chunks of what tastes like unadulterated scrambled egg. Overall, a thumbs up and way better than you'll get at the local Asian takeout. 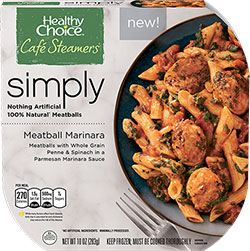 The Meatball Marinara was another surprisingly good meal. While the marinara sauce, tasted alone, is rather sweet, the bitterness of the generous amount of chopped spinach offsets that sweetness nicely. The whole grain penne pasta might be a little over done, but they still hold up fairly well.

The meatballs are the high point of the meal - slice them in half and there's no filler to be seen, just ground meat - although we know there are bread crumbs by reading the ingredients. The texture of the meatballs are a little smooth, but they have a fine savory flavor and a good bite. We've had worse meatballs in restaurants, to be sure. The panel liked the Meatball Marinara better than the Chicken Fried Rice, but only by a small margin: either one would be a good lunch - as long as you can recycle all that plastic.