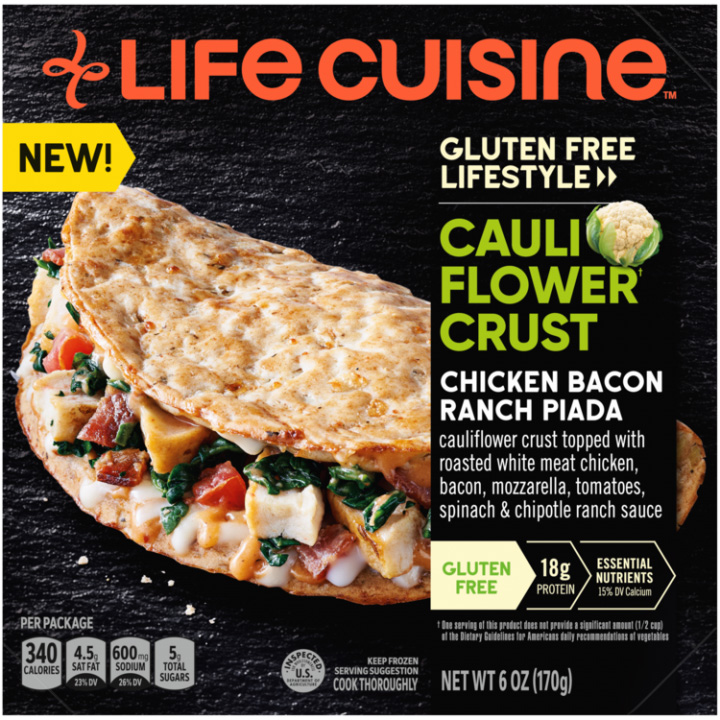 It appears that the Life Cuisine trademark is an offshoot of Lean Cuisine that focuses on four "lifestyles": "Low Carb Lifestyle", "Meatless Lifestyle", "High Protein Lifestyle", and "Gluten Free Lifestyle".

While I don't necessarily like to see Celiac disease considered a "lifestyle" - it's an autoimmune disorder that can only be treated with a gluten-free diet - it's good to see more gluten-free options available in the freezer case.

Lean Cuisine/Life Cuisine has entered the gluten-free market with an emphasis in their meals on vegetable- and legume-based substitutes for what would often be wheat-based products. These include bowls made with riced cauliflower instead of rice or pasta and pasta bowls utilizing pasta made by Banza (a pasta made with chickpea flour). They also make pizzas and piadas that are also made with bread and pizza crust substitutes made with cauliflower.

According to the package, a "piada" is "an Italian-style street food with origins in the Romagna region of North-Central Italy." It seems to also be known as "piadina" and is a flatbread somewhat like the Mexican tortilla or the Indian naan, roti, or chapati. All four are sold from street vendors in their respective countries as a sort of hand-held wrap or sandwich with a variety of fillings.

These start out with two strikes against them. While the packages recommend using a conventional oven "for crispiest crust", we used the microwave option for both. These are microwaved on little stands fit with a silvery surface that is supposed to crisp up the crust. As we've seen with Lean Cuisine's microwave pizzas here, here, here, and most recently here, this doesn't necessarily work very well.

Then there's the issue of bread-like substances made with cauliflower, as with Caulipower's pizzas and pizza crust. Even cooked in the oven, these crusts were more like damp water crackers with the flavor of cauliflower than anything approaching a pizza crust. 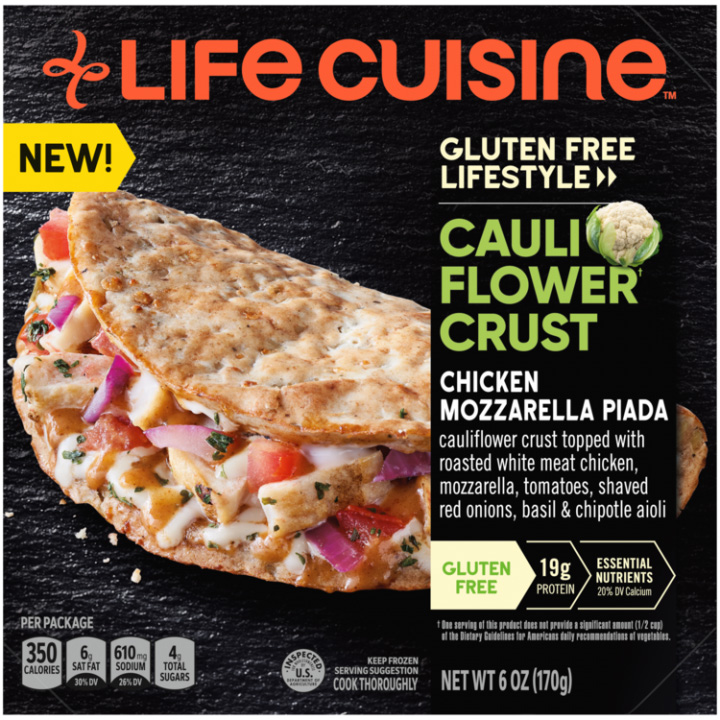 For these piadas, Life Cuisine has created a cauliflower flatbread that also contains mozzarella cheese, rice flour, and flaxmeal, cooking them on the silvery surface like a pizza. Once they've finished their three minutes in the microwave, you fold the piada in half (like a taco) and eat. 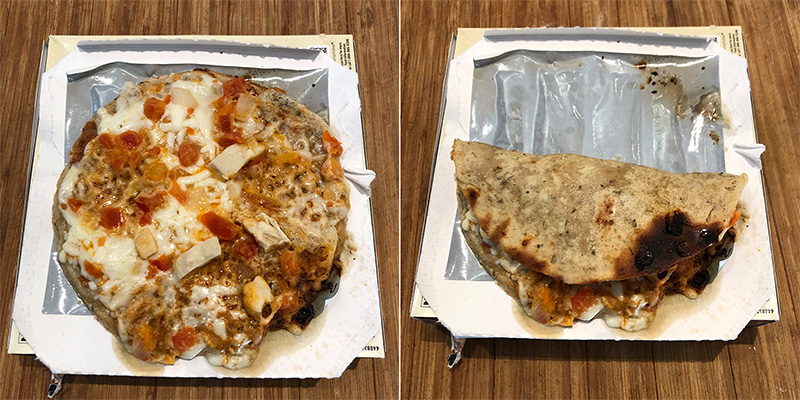 There are good and bad points about both varieties we tested today.

No, it's not crispy, like a panini might be - and if you like that, they do include conventional oven directions that likely would work well and yield a crispier outside with a tender inside. (Let us know if you try it.) Note that the crust does get a little hard if you let it cool too much - this is not one to leave sitting for too long.

The chicken is tender and there's plenty of cheese on both sandwiches, and both have a nice bit of zing - one from a bit of bacon, the other from a chipotle sauce.

The problem with these is the salt. Both sandwiches have over 600 milligrams of sodium and you can taste every single one in these sandwiches. They are mouth-burningly salty.

I tasted the various parts of the sandwiches separately, and it tastes as though every ingredient, from the flatbread to the sauce to the chicken and the spinach (in one dish) has had salt added to it before the sandwich was ever assembled. These would be terrific with half the salt. Too bad.

Read all our reviews of Lean Cuisine products »