We've reviewed almost 300 different convenience foods and other products since we started doing Dr. Gourmet's Food Reviews about eight years ago. While some of the foods we reviewed in those early days are no longer available, some still are. It seems only fair that we revisit some of those older foods to see if, and how, they've changed. Do they taste better now, or worse? Are they any better for you?

We decided to start with two of Lean Cuisine's standbys: Macaroni and Cheese and Chicken Enchilada Suiza.

Well, while the numbers might have improved, it's hard to say that the flavor is any better. Last time we reviewed the Macaroni and Cheese we found it a little bland. This new version doesn't seem much different, with a smooth, creamy cheese flavor that you have to focus on to really taste. I'd almost say that it could use some salt, but we know from eating this when it did have more salt that chances are it wouldn't help. Not only that, but the pasta was almost baby-food mushy with very little body. Switching to whole wheat pasta would not only give it more fiber, it would also give it more flavor. On the whole, if you really want mac and cheese, this is fine but there are better versions on the market. Or make your own. 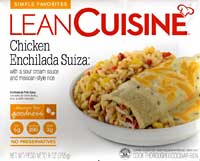 The last time we reviewed the Chicken Enchilada Suiza we gave it 1 of 5 forks. The good news is that this is a much better-tasting product: the sauce is creamy, with a good sour cream and lime flavor. The shredded chicken inside the corn tortilla is nice and spicy, with white and green onions you can actually see, and while the chicken could end up pasty, in this dish it does not. The side of Mexican rice contains corn and red peppers and the rice maintains its body without being too dry. Those with Acid Reflux or GERD should avoid this one - it's nice and spicy. Overall, good stuff and two thumbs' up.

But then there's the (sort of) bad news. The version we reviewed several years ago had 270 calories, 4.5 grams of fat (2 grams of saturated fat), 510 milligrams of sodium and 3 grams of fiber. Quite respectable. This newer version is now 290 calories (still not bad), 5 grams of fat (2 of saturated fat), 560 milligrams of sodium and still 3 grams of fiber. So this version with much better flavor has a little more fat and a bit more sodium, but it's still well within acceptable convenience-food parameters for Dr. Gourmet.

We'll be doing more of these re-reviews in the next few months to see if the manufacturers have improved their products. At least one product has improved, so I'd say that we're off to a good start.