Last year we reviewed five different meal delivery services: HelloFresh, Blue Apron, Home Chef, Plated, and Hungryroot. Technically these aren't meal delivery services, however - they're ingredient delivery services and you do the cooking. Freshly delivers pre-cooked meals that they describe as "chef-cooked, healthy meals delivered to you." Six meals cost us $39 through an introductory offer - their regular prices range from $12.50 per meal to $8.99 per meal depending on how many meals you have delivered each week. (To only pay $8.99 per meal you would have to order 12 meals per week.)

We logged in and chose from the available meals, trying to get a variety of options. We did notice that there weren't many vegetarian options available, and only one seafood dish. Evidently not every type of meal they make is available to order at all times, so we can't draw any conclusions - there may be more vegetarian and seafood recipes available at other times. The package arrived about a week later: a large box insulated with biodegradable denim and gel ice packs (boy do we have a lot of those now). The meals are not shipped frozen and are intended to be consumed within a few days of delivery, although they do note that you can freeze them if you choose to. Each meal included microwave and conventional oven reheating instructions - as always we chose to microwave them. Here's what we got: 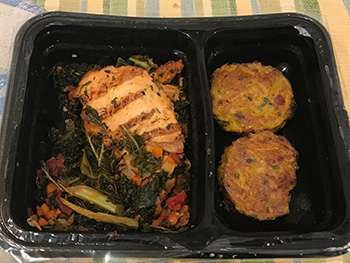 This is a grilled piece of salty, chewy chicken - not dry, we must admit - with about 2 Tablespoons of kale that tastes mostly of salt and bacon. Bacon is apparently a theme in this dish: the butternut squash cakes (mealy and "like thick cardboard") accompanying the dish taste of nothing but bacon. There's no subtlety in this dish at all. 540 calories, 800 milligrams of sodium, 6 grams of fiber. 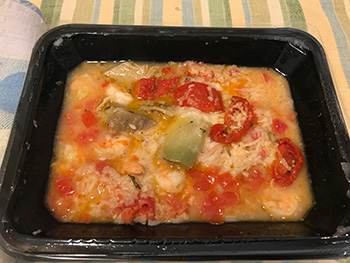 This was just disgusting. A gloppy, gooey mess. We'd assumed that it would come over pasta and were looking for the pasta when we realized that it was supposedly served over white rice. Well, the white rice turned into mush in all the sauce, which smelled of butter, garlic, and parmigiano. The shrimp were chewy, and what were these giant pieces of dried tomato and artichokes doing in here? That's when we realized how much fat is in these dishes: this one has 25 grams of fat - 25! - and 7 grams of saturated fat. 520 calories, 570mg sodium, 5g fiber. 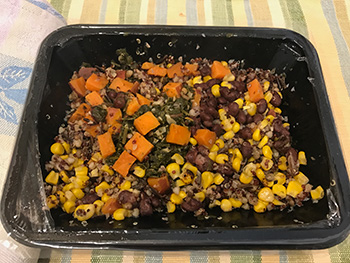 We had high hopes for this one, a bowl of quinoa, buckwheat, wild rice, sweet potatoes, corn, lentils, and black beans. The sweet potatoes were mushier than we would have liked and the corn was only a little crunchy - the only real texture in this dish comes from the quinoa. The real problem was the spicing. There's the faintest hint of cumin and cilantro, but really the only flavors are from the ingredients themselves, which makes the whole dish fairly bland. Using olive oil instead of canola oil might have helped give the dish some flavor ("there's way too much oil anyway," said a panelist). This had the lowest amount of sodium of all the meals at 510 milligrams, but the highest fiber (13g). "610 calories of what might have been," a panelist sighed.

Wow. This has 14 grams of saturated fat - 29 grams of total fat. The steak is about 3/4 of an inch thick and fairly tender - it can be cut with a table knife (no steak knife necessary). The microwaving leaves it cooked through without a hint of pink in the middle, but it's not bad. A bit chewy. The smoothly mashed potatoes the steak is served with are incredibly salty, however: you can taste every one of the 830 milligrams of sodium in the 510 total calories. The baby green beans aren't too overcooked, and while they don't taste fresh, they're certainly buttery. 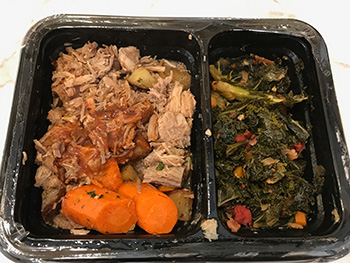 Another rather nondescript meal of 500 calories, 880 milligrams of sodium (ouch), and 6 grams of fiber, with 26 grams of fat and 7 of saturated fat. The pulled pork is served with 2 big chunks of carrots ("what's that about?") that the panel couldn't decide whether they had been peeled or not. The roasted potatoes are overcooked and mushy while the kale, despite being served with diced carrots, onions, and tomatoes has little flavor other than (you guessed it) bacon. There's a dollop of brown sauce on the pork "that might be barbecue-ish?" We couldn't tell. The pork is tender, but "there's just not much flavor." 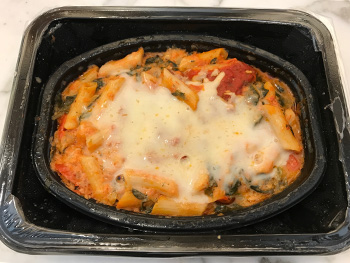 "That's a lot of cheese." This was by far the best meal of the six, with a creamy tomato sauce that would actually be better with less than the 720 milligrams of salt the meal contains. ("It's not mouth-burningly salty. Write that down," commanded a panelist.) 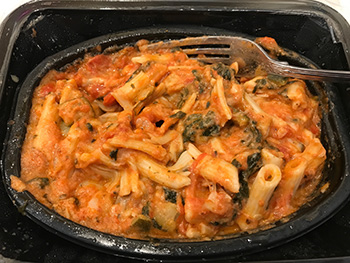 We would have given this a thumbs up if it weren't for the pasta, which was not only mushy but actually shattered when we stirred the dish (per the instructions).

We just can't understand it. How can Freshly call these meals healthy when they're so full of salt and fat? Worse yet, they're either boring or just taste salty - and for the amount you'd spend on a subscription, you could buy the ingredients for all of the day's meals, not just one meal. Fresh meals, delivered, is a great idea, but the execution is lacking.