After almost ten years of food reviews, it's especially nice to spot something new. This week I was in Whole Foods, and although generally speaking it seems that we've reviewed just about everything my local Whole Foods has to offer that fits the Dr. Gourmet criteria (under about 650 milligrams of sodium being the most important criterion), I glanced through the frozen food aisle on the off chance there might be something we could review. Maybe something that hadn't met our criteria had been reformulated? I try to keep an eye out for the "New!" flags on packaging.

Fortunately I spotted the pizzas we'll be reviewing today. They're so new they're not even listed on the Whole Foods Web site, although they're from their 365 Everyday Value line. 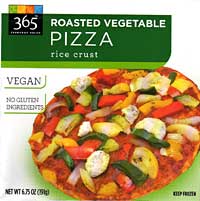 These are essentially identical pizzas: a Roasted Vegetable Pizza, one with a whole wheat crust and one with a rice-based crust. These are vegan pizzas, meaning they contain no animal products whatsoever, but don't let that put you off (we didn't). These are good. Not great, but good.

The roasted vegetables topping both pizzas have a good, fresh-roasted flavor. There are red and yellow bell pepper strips, along with chunks of yellow squash, zucchini, poblano peppers, artichoke hearts and red onions. All substantially-sized chunks and very flavorful. The pizza sauce is especially good, with a mellow roasted tomato flavor and a nice garlicky zing.

The only difference between these two pizzas, as I mentioned, is that one has a rice-based crust, while the other has a whole wheat crust. We cooked these on a pizza stone in our oven, because the packages say, "microwave cooking not recommended." Which is too bad - makes it difficult to take these to work. We should have cooked at least the rice-based crusted pizza directly on the oven rack, as it would have come out crispier, but the rice crust is still OK for a gluten-free pizza crust: a little sweet, a little doughy. (The Against the Grain pizzas we reviewed earlier this year have a much better gluten-free crust.) 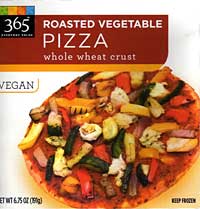 The whole wheat version, however, is rather good: tender, yeasty and a little sweet. In fact, it reminded us of our Whole Wheat Pizza Dough recipe. And because we have that pizza dough recipe, we were a little concerned about the Nutrition Information provided for this pizza.

The Roasted Vegetable Pizza with Rice Crust has great numbers: 310 calories for the whole pizza, 300 milligrams of sodium (wow!), and 4 grams of fiber. The rice-crusted pizza had about half the amount of roasted veggies on it than the whole-wheat-crusted pizza, which is understandable, as gluten-free versions of baked goods like pizza crust tend to have more calories than the standard versions.

However... the Roasted Vegetable Pizza with Whole Wheat Crust has only 150 calories for the whole pizza (along with only 380 milligrams of sodium and 5 grams of fiber). The Dr. Gourmet Whole Wheat Pizza Crust, which yields a pizza crust just about exactly the size of the Whole Foods version, has 285 calories. And that's before you put on sauce or toppings. My estimation would be that this pizza would have closer to 350 or 400 calories all told - which is still quite reasonable. I've sent a message to Whole Foods asking them to verify these numbers, and I'll let you know what I hear from them.

In the mean time, we'll give these pizzas a positive score. In fact, these would make great kids' snacks, even if you add an ounce of mozzarella cheese before baking. OK crusts, great flavor - we'll see about the numbers.