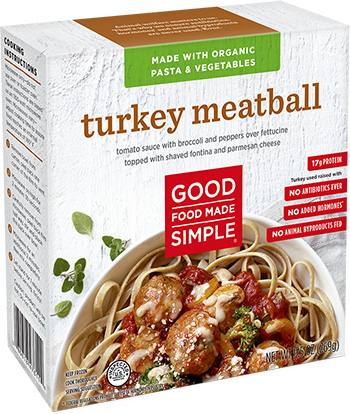 When we first encountered this company, Good Food Made Simple, I said the company name was pretty gutsy. We've seen a lot of hyperbole in frozen food marketing, but this company lived up to its name, at least in the realm of breakfast foods.

It had been so long since that last (first, only) review of the company's products that when we found today's items at our local Target the company name rang only the vaguest bell. Today's review items weren't the only items from Good Food Made Simple on the shelf, however, but they were the only two that fit our sodium criteria. If good food made simple is the goal, how can over 1,000 milligrams of sodium in a 390-calorie meal be said to be meeting that goal?

Since last week's Pad Thai was so terrible, the panel decided to review the Turkey Meatball first (and I can't blame them). Despite the name, this is actually a pasta dish of turkey meatballs and broccoli in a tomato sauce over wide fettuccine noodles, with 250 calories, 590 milligrams of sodium and 4 grams of fiber.

The "meatball" referred to on the package is actually 3 meatballs that are each a little more than the size of a quarter in diameter. They're finely-grained and firm with an assertive turkey and black pepper flavor and are just a little chewy. After all this time the panel's expectations are pretty low, but there were exactly three broccoli florets to go with the three meatballs. THREE. Good Food Made Simple might think that "less is more" (that's what it says on the package, anyway), but this isn't even ONE serving of vegetables. In this case, less is just less.

The fettuccine pasta was reported to be "a little overcooked," and the tomato sauce was described as "mostly roasted red pepper and onion, with some oregano." Overall, "not a bad little plate of convenience meal pasta," said a long-time panelist. "I'd rather have this than a lot of other pastas we've had." 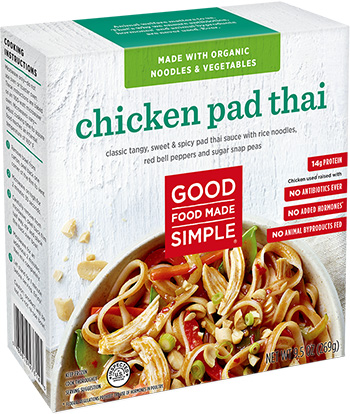 The good news is that unlike last week's pad thai, which had hardly any scent, today's offering "lets you know it's pad thai right away." Granted, there are exactly 2 and a half sugar snap peas and a few strips of red bell pepper (lightly cooked and still crunchy), but the panel was inclined to forgive Good Food Made Simple for skimping on the vegetables once it tasted the meal.

The panelists first noted that there is what seems to be a fair amount of chicken that "looks pulled, not cut up." The chicken pieces (mostly bits, but there are a few more substantial chunks) are "a little dry" and "almost mealy" in texture, but the team agreed that the chicken "tastes like it was marinated in lime and tamarind... and it's spicy!"

Rice noodles are tough to pull off in the microwave, but Good Food Made Simple presents rice noodles that hold up to stirring and still have a little bit of chewiness to them. "They're NOT mushy," reported the panel. Julienned carrots add a little crunch, as do the chopped peanuts. The exceptional thing about this meal is the spice: there's plenty of cayenne to heat things up, but that doesn't overwhelm the other flavors, which include tamarind, lime, and sesame. Overall the panel felt that this was one of the spicier meals we'd tasted in a while, and they were happy about it: "This is like real pad thai," they said. "I would eat this again. Where did you get it?"