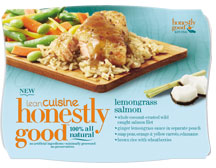 I'm not sure I ever thought I'd see the day. For years there's been a gulf between the big players like Lean Cuisine, Weight Watchers, and Healthy Choice, with their overly-salty and overly-processed foods and the smaller companies like Amy's Foods, Kashi, and Annie's Homegrown, with their focus on healthier, organic ingredients and less processing. The numbers might not be all that great on either end of the spectrum (at least from our perspective here at Dr. Gourmet), but for a long time the name "Lean Cuisine" has been nearly synonymous with "bad tasting and bad for you."

To be fair, Lean Cuisine has really been improving in the last few years and more and more of their meals get good reviews from us both on flavor and healthfulness. But now they've recently taken a step into the "minimally processed" section of the frozen meal market. They have a new line they're calling "Honestly Good:" 6 varieties of meals - with two fish options! - none of which have more than 590 milligrams of sodium and all come with sides like brown rice and whole wheat pasta. There are nothing but recognizable ingredients on the labels.

That's the good news, but the really important question is, How do they taste? Remember, the Dr. Gourmet motto when it comes to frozen meals is "We eat it, so you don't have to." We started today with the Lemongrass Fish (and hope to find the other four varieties to taste in the future).

Another difference between the stereoypical frozen meals and these meals is that they're presented with all of the ingredients in one, rectangular, plate-like package. It's almost like microwaving a plate of food you made yourself and froze for one of those nights you're just too busy to cook. (The drawback is that this seems like a lot more plastic to recycle and it does take up more room in your freezer than the typical frozen meal.

The instructions say to pull back the plastic film and remove the included packet of sauce, which you are then to gently defrost in a bowl of cool water. Meanwhile you microwave the meal for 3 minutes or so, add the defrosted sauce on top of the protein (whether it's the fish, chicken, or beef), then replace the plastic film and cook for (about) another 2 minutes.

The vegetables in this dish are a bright bunch of yellow and orange carrots with snap peas and edamame, and they have plenty of crunch and great flavor. There are enough veggies that I can see that this would be pretty filling, even without the brown rice with wheatberries. That brown rice is unfortunately a little overcooked as well, but again, not terribly so, and the wheatberries add texture. So far, so good. The sauce is redolent of lemongrass - almost too much so - and it's a little sweet with the scent of the ginger combining with the coconut crust on the fish. 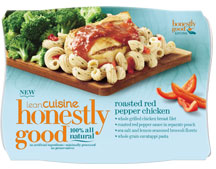 The approach of putting the sauce on top of the protein halfway through the meal works pretty well (although not always, as we'll see). Cooking fish in the microwave is a tricky business, especially with a piece this thin, but Lean Cuisine does a fair job of it, leaving the 2-ounce piece of salmon well done. (A little more done than I'd like but quite acceptable.) Overall, the panel agreed that this is a good way to get a (half) serving of fish in your diet, with 320 calories, only 440 milligrams of sodium, and 5 grams of fiber. It's not great, but we'll give it a solid thumbs up.

Unfortunately, the same can't be said for the Roasted Red Pepper Chicken. In theory this should have worked well also, with the red pepper sauce added halfway through cooking to protect the chicken from drying out. Not only does it fail on that score (the chicken is not quite dried to stringiness, but it was close), the pasta doesn't benefit from the moisture at all, leaving it crispy-chewy around the edges of the plate and properly cooked only directly underneath the chicken.

And then there's the broccoli, which looks to be the perfect amount of broccoli for a child who hates broccoli but will not be permitted to leave the table until they finish all of it. Another 50 calories of broccoli would add a lot of volume to this dish - and it still would be only 320 calories (this is labeled 270 calories) Worse, the broccoli tastes "as if it had been cooked, dried, reconstituted, frozen, and then microwaved," said one panelist. (And they like broccoli!) The roasted red pepper sauce wasn't bad, if just barely into the too-sweet category, but who cares? Pass this one up.