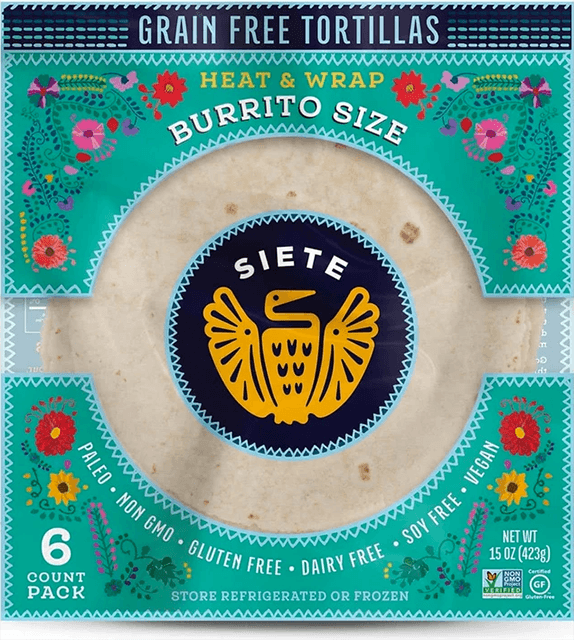 Here's the thing. Flour tortillas suck. The ones made with white flour are basically sugar (white flour) with a lot of salt and usually some fat. In a way this is a case of you get what you pay for.

A large tortilla at my local Giant supermarket is $1.79 per 10-count package. This is the 10 inch version that you would use for a burrito. It contains 35 grams of carbohydrate, 5 grams of fat, and a whopping 470 milligrams of sodium. At 18 cents per tortilla it seems a bargain.

But it tastes like crap, and even though it says that it contains only one gram of sugar, it actually is a lot more given that your body sees and metabolizes white flour pretty much like table sugar. Giant does carry an whole wheat version but it is smaller (8 inches instead of 10). It does have 4 grams of fiber and is a bit lower sodium at 370 milligrams.

In the end, however, few of these taste like much. With a sandwich the bread brings some flavor to the table (even Wonder Bread at least tastes like wallpaper paste). Most flour-based tortillas just don't have much flavor - not as bad as Wonder Bread, but no real character. Most of the recipes on the Dr. Gourmet website call for corn tortillas for this reason - great corn flavor but also whole grain without all that fat and salt.

There has been a rush to market in the last few years for alternatives to flour tortillas as people have gone grain free. Whether most people need to go grain free or not is another column, but the real issue is that making a good burrito with something that doesn't contain wheat flour is challenging.

Today we review three such products from a company called Siete. This is a family owned company from the seven members of the Garza clan who have a terrifically endearing story on the package that makes you believe in the product, not to mention the fabulous 1994 embarrassing family photo. Spoiler alert: you will want to get at least one of these and can read their story and see the hysterical photo then.

The first two are taco sized. 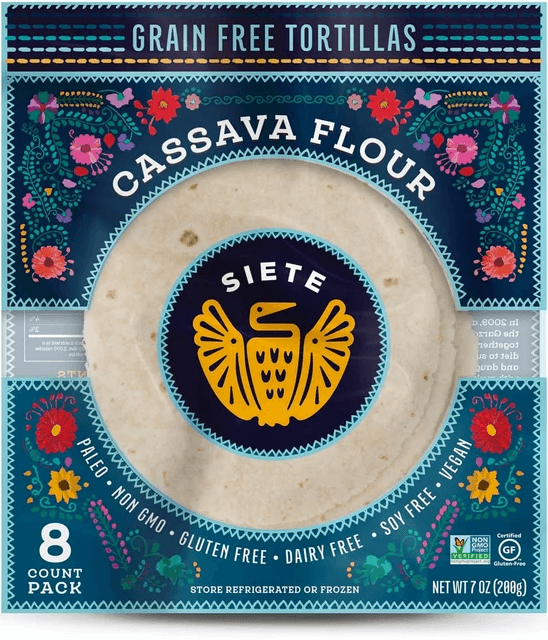 The Cassava Flour tortilla contains mostly cassava flour with some coconut flour and coconut oil. Like the white flour tortillas you can purchase, this one just doesn't have much flavor. The good thing is that they don't have the astringent wallpaper paste taste of white flour, so their neutrality is a bonus. Two of these contain 130 calories and a whopping 3 grams of fiber - more calories and fiber than a corn tortilla - but the sad part is there is 240 milligrams of sodium. I am not sure why, because there is no real reason for it. Note that it all comes from added salt and not another agent like baking soda. A good product, but not great.

Of note, do not follow the directions for heating unless your griddle is non-stick. This will stick to a regular skillet like never before (sort of like wallpaper paste).

The chickpea flour version is a LOT better. It has a texture similar to a corn tortilla and the nuttiness of the chickpeas really comes through - no wallpaper paste flavor for these guys. A few more calories at 140 for two but a whopping 4 grams of fiber. Still too high in sodium at 220 milligrams. That might bring a little something to the taste here by enhancing the garbanzo flour. A very little something. 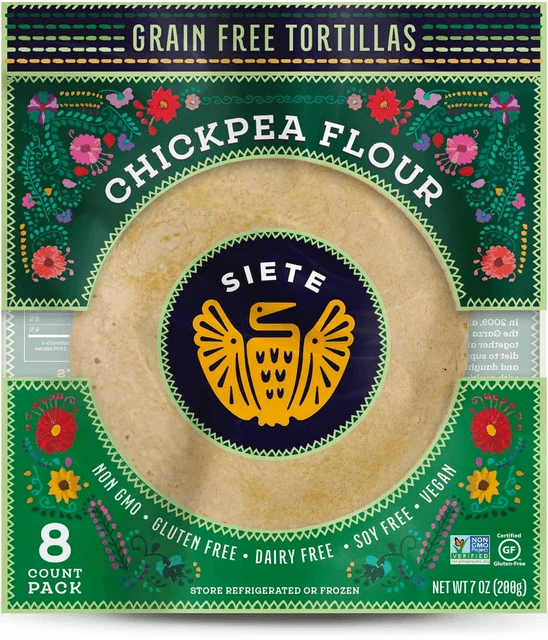 Personally neither of these is very exciting. If you are one of the very few people who can't eat corn there is no reason for you to purchase these because corn tortillas are lower in calories, super inexpensive, freeze well, are high in fiber, low in sodium (if any at all to speak of) and get you a point on the Mediterranean diet score.

If you scanned down to see which one the spoiler alert was for, it is their burrito size wrap. These have a similar flavor to the cassava version of the smaller tortilla but are made with cassava flour and tapioca flour. They are huge - a whopping 10 inches in diameter. While they are a bit bland, that's OK. For a great wrap or burrito you are not necessarily looking for the tortilla to bring flavor to the party. For those eating gluten free, run, don't walk, to the store for these bad boys. Calories? 190, check. Fiber? 4 grams, check. Sodium? 340 milligrams, no check. I just don't understand bringing that much salt to your wrap party when it is not adding saltiness to your little burrito bundle of joy, but this is still the best gluten free wrap I have ever tasted.

The even better part is that these are really forgiving. Unlike flour wraps, there is no cracking or splitting. Heat a bit, fill with your favorite stuff and fold into the envelope (there's even lovely diagrams on the package that tell you how). OK, these are pricy at about $1.50 per tortilla but as I said earlier, you get what you pay for.

Buy this wrap. Support this family. Hopefully they will invest the money to reduce the sodium content down around to a reasonable 200 milligrams because if they do, I will quit having peanut butter sandwiches for lunch and switch to veggie wraps. Every. Single. Day.