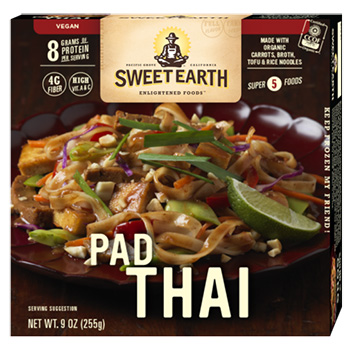 Back in April we tested our first bowls from Sweet Earth Foods. We were concerned, because in the past other companies have not fared well when they ventured out of what we considered their core competency. Fortunately both got a thumbs-up from our panel, with the Pizza Mac and Cheese characterized as "possibly the best mac and cheese we've ever had."

A trip to our local Target this week allowed us to pick up a half-dozen or so more varieties, so you can look forward to seeing reviews from Sweet Earth Foods a little more frequently in the next few months (we try not to repeat companies from week to week - not just for your sake, dear readers, but also for the sake of our tasting panel). These cost us $3.99 each, making them a bit more expensive than the typical Lean Cuisine (about $2.00) and quite a bit more costly than, say, Michelina's, which at a buck apiece are "a good example of 'you get what you pay for'," as one of our panelists said recently.

First out of the microwave was the Pad Thai. As I've said before, rice noodles are tough to do well at home in a stock pot, let alone in a microwave. How would these fare? As it turned out, it didn't really matter.

The numbers are good on this meal, with 310 calories, only 480 milligrams of sodium, and 4 grams of fiber (not gluten-free, however). Given that rice noodles have no fiber to speak of, we know that all of the fiber has to come from the other ingredients - and the first look at this dish bears that out: "Where are the noodles?" asked a panelist.

After peeling off the plastic film, the first thing you see is a bowl full of orangy-purple shreds. This turns out to be thick layer of julienned carrots and shredded red cabbage, dotted with a few flabby green onions and limp strands of red bell peppers. Stirring the dish pulls perhaps an ounce of noodles, four snow peas, and a half-dozen bits of tofu up from the bottom of the bowl where they're hidden under the vegetables. Lots of vegetables isn't necessarily a bad thing - lots of vegetables means lower calorie density, or more volume of food per calorie: "Less calories, more filling," as one panelist describes it.

But "noodles are kind of the point of pad thai, right?" The noodles themselves aren't overcooked - they are fairly al dente for rice noodles - but the presence of noodles feels more like an afterthought - "Oh yeah, and here are some noodles."

Paired with the not-nearly-enough noodles is the not-nearly-enough flavor. Fresh out of the microwave you have to get right up close to catch a whiff of pad thai, and that's carried through to the mouth: "vaguely pad-thai-flavored," said a panelist. "No spice at all," said another. "This is negative chilis," offered a third, referring to the way spice levels are depicted in Thai restaurants.

The verdict? "If you like shredded carrot and cabbage salad with a hint of pad thai flavor, this is your dish." Disappointing, Sweet Earth.

Surely the Chana Masala had to be better. Indian food is full of flavor, after all. The fact that we could smell the masala cooking was reassuring, but once again the first look at the meal was a bit dismaying: unlike the picture above, with rice taking up a good third of the bowl, what you get is a shallow bowl of chana masala punctuated by a dollop of yellow rice, placed in the center of the bowl as if it were a garnish of sour cream plonked into a bowl of gazpacho by a not-very-caring chef.

The 6 grams of fiber in this bowl (320 calories, 510 milligrams sodium, not gluten-free) clearly come from the garbanzos and peas - even if the rice were brown rice and not white rice, a scant tablespoon of cooked rice is hardly enough to register on the Nutrition Facts panel.

Rice aside, the chana masala itself is quite good: every bite has texture that's largely provided by the peas, but the garbanzos are firm and the diced potatoes aren't anywhere near overcooked (as they so easily could be). The tofu chunks, half a dozen or so, are as chewy as you might expect them to be (if you're a pessimist), but at least they've benefitted from their time in the chana masala and have some flavor. And that's the best of the meal: the sauce itself has a fine tomato and garam masala flavor. At first the panel thought it might be under-spiced, but after a few moments the afterburn kicks in. It was a bit of a split decision on this one: some felt that it could receive a thumbs-up for flavor "even though you really should eat it with a spoon," while others felt that it just wasn't worth the price tag. We'll give it an official thumbs down, because for $4 you could make your own Chana Masala and (if you double the recipe) eat it all week.