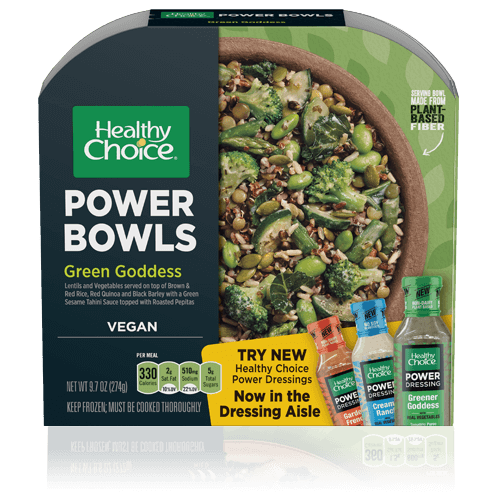 If the number of comments and shares on various social media platforms from DrGourmet.com are any indication, people seem to be pretty interested in the Power Bowls from Healthy Choice.

This week we have two vegetarian bowls - one vegan, one with a meat substitute - for review.

Our tasting session began with the Green Goddess Power Bowl, which is impressive at 330 calories, 510 milligrams of sodium, and 12 grams of fiber - and it's vegan.

The packaging is alluring, depicting lots of green lentils, edamame, broccoli, zucchini, and brown rice. The actuality is rather less impressive: 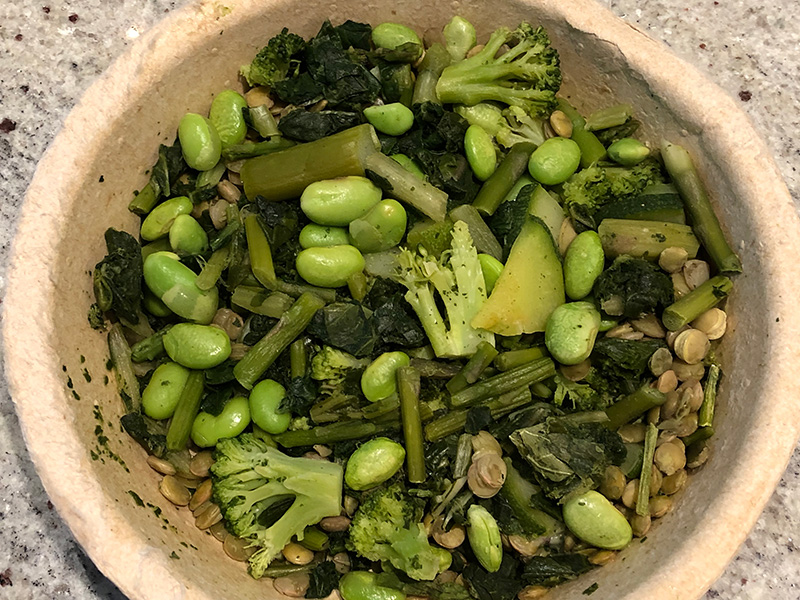 Appearances can be deceiving, however. Just out of the microwave this looks like somebody picked all of the green vegetables and legumes they could think of and put them in a bowl over a tiny amount of brown and red rice (along with, according to the package, quinoa and barley).

Those stick-like elements? Those are asparagus. They're fairly tender - less stringy than we expected from the way they look, certainly - but we never found an asparagus tip. The zucchini are overcooked but still have a little crunch, and the same is true of the broccoli.

This is one of those dishes that requires that you make an effort to stir it together before you taste. At least for us, the tahini (that is, sesame-flavored) sauce was all in the bottom of the bowl, so a good stir was really needed to bring out the flavor of the dish. With that savory flavor mixing with the nicely soft green lentils and the crunch added by the pepitas (pumpkin seeds), we found that this is actually a pretty good dish, not just for vegans but for omnivores as well. 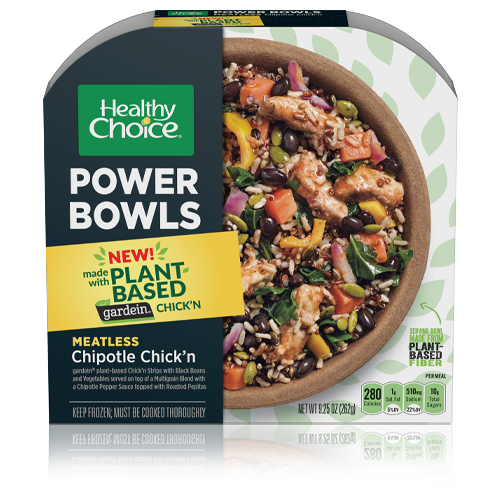 When this came out of the microwave we couldn't help but compare this to the Smoky Mole Madness from Fat Rabbit last week. This is how chipotle should be used - it gives the whole a mellow flavor that's not vinegary but far more smoky than the name from last week implied.

It's another bowl that definitely benefits from a good stir before tasting. Sure, most frozen meals such as these have "stir" in the directions, but for purposes of flavor that matters far more in some cases than others.

The base of brown and red rice, with quinoa and barley, is a bit overcooked. The peppers and onions are also a little softer than I'd like, but the sweet potato is cooked just right, and its sweetness cuts through the chipotle sauce nicely.

The pepitas give the dish just enough of a crunch and the beans are firm and flavorful. There's some heat due to the chipotle, but it's a mellow background to the rest of the dish.

The "chick'n" is interesting - it looks like chicken strips and would probably fool any casual observer. Take a bite and it's far smoother in texture than you'd expect even processed chicken would be, and rather than tasting of true chicken, the flavor is more "yeasty, like you've taken a big bite of a really good dinner roll," according to my wife. This is not a negative comment by any means!

We give both a thumbs up. Consider these for your work lunches.