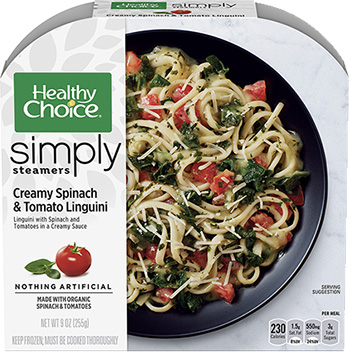 Today we have two new items from Healthy Choice. These are from their "Simply Steamers" line, although how the "Simply Steamers" are different from their "Cafe Steamers" line is not clear to me or our panelists. Both lines feature way too much plastic: the non-sauce foodstuffs arrived placed in what is essentially a plastic colander, which fits into a plastic bowl that contains the sauce, and the whole thing is microwaved with a plastic film over the top.

It seems that the idea is that the sauce steams and cooks the food in the colander, then when the microwaving is complete, the food is dumped into the sauce, all is mixed together, and the purchaser consumes the meal.

As I'm sure I've said before, it's a great idea in terms of cooking the food, but judging from my extensive experience with frozen meals, it's a huge waste of plastic. You have only to look at other positive reviews of other frozen meals that don't require "steamer baskets" - not to mention reviews of other "steamer meals" from Healthy Choice - to see that a nifty colander doesn't always mean a tasty or healthy meal. It doesn't even ensure that the various ingredients are cooked properly, which is presumably the point of such a complex cooking process.

Despite the waste of plastic, we tasted the Creamy Spinach & Tomato Linguini dish first(230 calories, 550mg sodium, 5g fiber). After about 4 minutes in the microwave, we dumped the food in the internal colander into the underlying dish containing the sauce and stirred as directed.

As we removed the dish from its covering cardboard and placed in the microwave, a panelist noted, "Doesn't look like a lot of spinach."

"But that's cooked spinach," noted another. "You know there has to be a TON of fresh spinach to look like there's very much cooked spinach at all."

When we poured the microwaved meal into the waiting plastic bowl, the first commenter took their comments back: in our package there might not have been all that much spinach on top, but pouring the product into the other dish revealed a lot more spinach than had been initially expected.

That spinach has just the flavor you'd hope to get from spinach: fresh but bitter. We did, however, find the tomatoes to be disappointing: the product image on the front of the box has easily four times the amount of diced tomatoes as appeared in our dish. Further, the panel wondered if these were yellow tomatoes and not the standard red tomatoes: they have a definite yellowish-orange color.

As you stir the linguine and its accompanying vegetables into the linguine, the pasta breaks up into 1 to 1 1/2-inch pieces. We were dubious at first, but these pieces aren't cooked into mush, as we expected: they're overcooked but still retain some chew. The aforementioned tomatoes provide a bit of texture, but overall the dish is... soft.

The sauce is no exception, with a gentle basil scent and flavor along with a hint of white wine and cream. This isn't an in-your-face-flavor dish, said the panel, but it's good nonetheless. 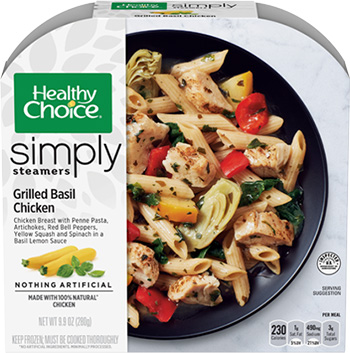 The panel felt the Grilled Basil Chicken (230 calories, 490 mg sodium, 5g fiber) was more impressive right out of the box: through the plastic film on top of the penne past can be seen several quarters of artichoke hearts, numerous substantially-sized pieces of chicken, and at least a few bits of red bell pepper and yellow squash.

This isn't false advertising, either: we found as we stirred the dish into its sauce that there are more of each ingredient than appeared at first, and most of them tasted at least close to as good as they looked.

As with the Spinach & Tomato Linguine, the penne pasta in the Grilled Basil Chicken shows a tendency to break apart when it's stirred, but like the linguine, that doesn't seem to affect its texture: it still retains a fair amount of bite. (Whole wheat pasta might have fared better in the cooking.)

The red bell peppers retain their color (and crunch), and the quarter-rounds of yellow squash do the same, with both lending a characteristic sweet bite to the dish. As you'd expect, the artichokes also stand up well to cooking, adding their tart and bitter note to the dish. The down side of the dish is that until we read the ingredients, we had thought that the diced spinach in the dish might be oregano or basil - the flavor was that undeterminate. The sauce is a bit indeterminate, as well: although it's billed as a basil lemon sauce, it's more basil scented than flavored, and the lemon is so gentle as to likely be safe for those with GERD / Acid Reflux: it's not tart in the least.

Overall, the panel felt that these two dishes were "subtle" and "just right for Summer lunches:" light, freshly-flavored, and tasty.