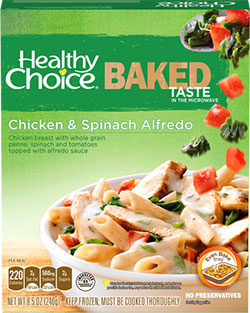 We've reviewed over 50 frozen meals from Healthy Choice, and sad to say, only about 2 in 5 got a thumbs up from Dr. Gourmet. It used to be that Lean Cuisine was the brand I (we, now) dreaded tasting, but now the green packages throw fear into the hearts of our tasters (including my wife, who persists in bringing Healthy Choice products home "because some of them have been good," she said).

Our panel chose to start with the Chicken & Spinach Alfredo. There's lots of spinach in this dish, dotted with chunks of diced tomato for more color. The sauce is hard to find, however. In a dish boasting an Alfredo sauce one expects to see a white sauce, but there is none to be seen. There's a sauce, sure - just a little and fairly clear - but despite the listing of heavy cream in the ingredients, nobody looking at this meal would guess it. The panel agreed that this does not bode well.

Surprise! The dish does have a subtle Alfredo (cream and parmesan) flavor and a creamy mouthfeel. The spinach flavor comes through nicely. The chunks of chicken are fairly juicy, but the penne pasta is moderately overdone, lacking that truly firm bite that I'd prefer in a pasta dish. There is some chewiness to add texture, however, and the panel thought it was acceptable in a frozen convenience meal. Overall, pretty good and much better than some of their other offerings: 220 calories, 560 milligrams of sodium, and 4 grams of fiber. 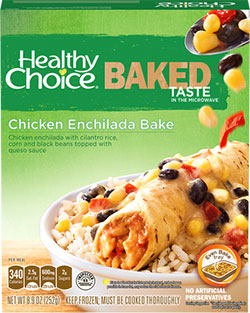 The Chicken Enchilada Bake didn't start out so well, either. The meal had been tilted at some point during the freezing process, so that all of the sauce had migrated to one side of the enchilada, leaving half of the rice to dry out during microwaving. (Attention Healthy Choice: the "Even Bake Tray" you advertise on the front of the box isn't going to work very well if the food inside isn't evenly distributed.)

It does smell great, however, with the aroma of corn tortilla, cilantro, and green chilies. The food itself, not so much. The rice, when mixed with the green enchilada sauce, is still oddly bland, with a hint of cayenne spice and slight metallic taste that lingers on the tongue. The black beans are nearly as crunchy as the corn kernels.

The one enchilada in this dish is a single corn tortilla wrapped to about the outside diameter of a quarter, and the inside diameter is about that of a nickel, which ought to give you a good idea of how much chicken, rice, and diced tomatoes might be in it (hardly any - there might be a tablespoon of filling total). After about a minute of cooling the tortilla is tough enough to require a knife to cut through - and how many of you out there pack a knife with your frozen lunch meal? Yes, the meal has some spice, but it also has that metallic aftertaste. Don't bother with this one: poor texture, off-putting flavor, hard to eat: forget it.

A split decision for Healthy Choice: quite against the existing odds.