Gluten-free bagels from Udi's and Against the Grain Gourmet 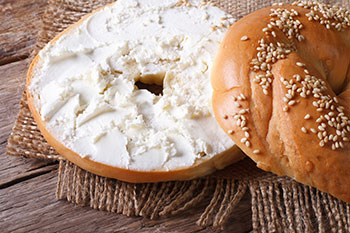 I missed them before I was diagnosed with Celiac Disease. Way back in about 1968 when bagels were an oddity in Atlanta (along with fresh mushrooms, salmon, capers, and strawberries out of season), a small bagel bakery opened over on Cheshire Bridge Road. It was aptly named The Bagel Bakery and was in a small, free-standing house. My brother Bruce found it first and we would go there and get a baker's dozen fresh out of the oven. Forget Krispy Kreme: these were amazing, toasted with a bit of cream cheese. It really was exotic.

(We had a dog at the time, a new beagle. He loved to eat bagels and liked them better with butter than cream cheese. A bagel beagle.)

Those bagels don't exist much of anywhere outside of New York City. Yes, some cities have authentic bagel bakeries, but for the most part what Americans think of as a bagel is not a bagel. Places like Einstein's and Bruegger's serve up massive rounds of over-proofed flour and water that has been steamed instead of boiled and are really nothing but a chewy, doughy mess.

Why would I want to try a gluten free bagel, then? Hoping against hope for recreating that heady aroma of a Saturday evening's trip to Cheshire Bridge Road, I suppose. Most bagels made with wheat flour are pretty terrible now, so why care about the daunting task of making a gluten free version?

Yes, the answer is travel. While the bagels I will review below are not really great bagels, they are O.K. pieces of bread, and for those folks eating gluten free, getting bread while traveling is pretty challenging. Bagels travel well, and when toasted are pretty good.

First up is the Udi's Whole Grain Bagel. Udi's bread products have gotten better over the years. Their breads used to be inedible but since being purchased by the food company Boulder Brands the products have improved steadily (note that our once favorite evol Foods has done exactly the opposite, with their products getting steadily worse and much less healthy). This bagel is a fat thing like most store bought bagels, and it is hard to tell the difference between it and an Einstein's bagel at first glance. It is a light brown in color and half-way pre-sliced. It is doughy but does not have a crust that is anything special. The texture is like most store bought bagels: tough and chewy.

The nice thing about a real bagel (which I will now forever miss) is that you can eat them straight out of the bag, untoasted. Raw, if you will. This has never been the case with store bought bagels or ones from places like Einstein's or Bruegger's. If the bagel is not toasted, it tastes like a chewy piece of nearly raw dough. This is true for gluten free bagels but even more so. Quite simply, an untoasted gluten free bagel is inedible.

Toasted, the Udi's is pretty good. Not a bagel by any stretch of the imagination, but good bread. The calories are not bad at 290 and it contains 2 grams of fiber. There is, however, a whopping 490 milligrams of sodium in a single bagel.

We have had good success with products from a company called Against the Grain Gourmet. Their pizzas are among the best frozen pizzas on the market, gluten free or otherwise, so I was intrigued by their new bagel offerings. They look more like true bagels, without the fat, puffy appearance of most on the market. The Sesame version slices well, but when raw the bagel is only so-so. Not as doughy and chewy as most frozen bagels, but still not edible without toasting. Toasted, this is, for now, as close as you are going to get to a bagel made with wheat. With some cream cheese or a bit of preserves it is quite good. Not great, but good.

The Cinnamon Raisin is similar, with a bagel-like appearance, good crumb and crust, and after being toasted, a nice offering. Both of them do have a slightly soapy aftertaste that is not offensive - but it is a bit odd. Better in both instances when they have something spread on top. They are much lower in calories (240 for the Sesame and 200 for the Cinnamon Raisin), but have only a trace of fiber. The sodium content comes in at under 300 mg for each.

None of these bagels are really bagels. Nor are they something that I would look forward to on a Sunday morning with the New York Times and a pot of coffee. Neither of the brands is really something I would eat day to day, but placed in individual Ziplock bags for travel, they work pretty well to have some bread in a pinch.