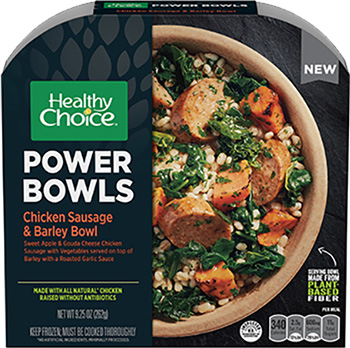 Today's meals from Healthy Choice are another Walmart find, and they certainly look promising.

Both the outer packaging and the bowl itself are made of paper and are thus recyclable ("made from plant-based fiber," says the package), and the description on the box declares, "Each Ingredient Matters." The pictures point out the whole grains, vegetables, and "dark leafy greens" in each variety, and the numbers are pretty good, with a moderate amount of sodium (600 milligrams in each of today's meals - which for frozen meals is indeed pretty moderate) an impressive amount of fiber (8 grams each), and a very good (again, for frozen meals) calorie-to-sodium ratio of .55 or more.

Even more impressive, in some ways, is that these are using the new Nutrition Facts panel, which among other changes calls for the calories to be in a larger font size and for the amount of added sugars to be listed along with total sugars.

The first item we tasted was the Chicken Sausage & Barley Bowl, described as "Sweet Apple & Gouda Cheese Chicken Sausage with Vegetables served on top of Barley with a Roasted Garlic Sauce." The picture on the box (at the top of this page) looks pretty appetizing, doesn't it? 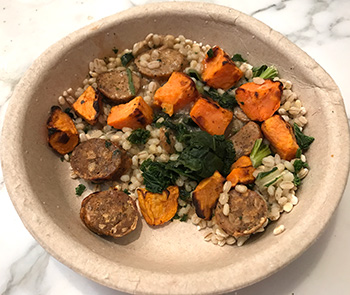 There's a "tiny wad" of greens in the middle of the bowl, with 12 pieces of sweet potato and 6 slices of sausage. "The meal doesn't even cover the bottom of the bowl," said one appalled panelist, looking from the packaging to the reality.

The sad thing is that all of the elements could have been good: the ("made with all natural chicken raised without antibiotics") chicken sausage has a fine sausagey flavor, and the apple in it, which might have made it too sweet, is "pretty restrained" and well balanced by the savor of the gouda. The sweet potatoes are soft but still firm enough to have character, and the barley is "about as chewy as you'd expect barley to be."

It's that little dab of greens in the middle of the bowl that's so very disappointing. Lots more greens wouldn't add many calories, but they'd add tons in the way of satisfaction: "they'd fill you up a lot more," pointed out a panelist. The roasted garlic sauce has a fine flavor - when you can find it. All in all, a real disappointment.

The Adobo Chicken Bowl is even worse.

This is another meal that looks great on the package - and on paper - but the reality is nowhere near the expectations.

It's described as "Pulled All Natural Chicken Breast with Vegetables served on top of Brown & Red Rice, Red Quinoa and Black Barley with a Guajillo Chili Sauce topped with Roasted Pepitas." Sounds like something you'd get at a healthy-minded Mexican restaurant, right? 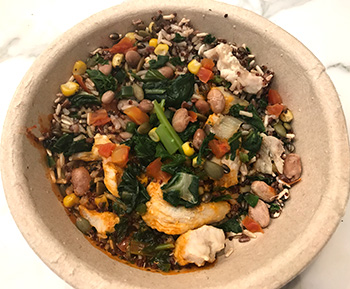 "That stick in the middle of the bowl isn't doing them any favors," opined a panelist, referring to the 1 1/2-inch piece of kale stalk.

If the chicken in that picture looks a little dry to you, that's because it is. One piece got spit out immediately ("ohmygod that's like old rubber"). Another piece was pronounced "freezer burned" after a taster took a bite, and a third panelist noted that even the bits that weren't "enough to dry out your whole mouth" were still tough and stringy.

Most of the pinto beans also appear to be freezer burned, as does most of the corn.

A panelist got to the heart of the matter: "There just isn't enough liquid." As with the Sausage & Barley Bowl, what sauce we can find has good flavor, being likened to a "non-spicy enchilada sauce." More of it might have prevented the meal from looking freezer-burned and tasting unfinished, "like they forgot to put anything with flavor in it."

Yes, "Each Ingredient Matters," but when I say that Dr. Gourmet is all about the food, what I really mean is that it's all about great-tasting food. These bowls are such a huge disappointment that I'm tempted to recreate them and post recipes just to show how easy it would be to do it right. (If you'd like me to do that, let me know in the comments.)