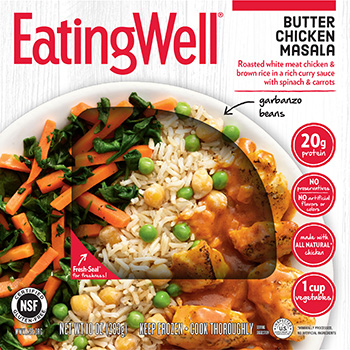 We've been pretty pleased with the frozen meal offerings from EatingWell. More than half of the products we've reviewed from them have been gluten-free, and only 1 in three have received a thumbs down review. That's darn good for frozen foods.

Today we are reviewing one meal that's certified gluten-free and another that is not: Butter Masala Chicken (gluten-free) and Vermont Mac & Cheese (not gluten-free, as you might expect).

We cooked the Butter Masala Chicken according to the package instructions, and as we stirred the meal prior to tasting it we were struck by the quantity of the vegetables in the side dish: "If there's a full half cup of cooked veggies, I'll be surprised," remarked a panelist.

That seems to be an ongoing theme: every package we've seen from this brand claims that it contains "1 cup vegetables," but the actual amount of vegetables served alongside the main courses are awfully small. This was first noticeable with the Cherry Port Pork, but in retrospect none of the meals - but for the vegetarian meals - seems to have been overly generous with the vegetables.

As I mentioned, the Butter Masala Chicken is no exception: there might be two tablespoons of cooked spinach and (at best) the same amount of julienned carrots. The spinach is so overcooked as to be not worth talking about, and the carrots are not just limp but actually wilted looking. They retain some crunch because they would have to be pureed in order to not be crunchy, and not because they're not utterly overcooked. That's the down side of the dish.

On the upside, the chicken is tasty and the butter masala sauce - which includes tomato, ginger, and turmeric - is plenty savory with "just the slightest hint" of chili peppers. It's served over nutty, chewy brown rice dotted with garbanzo beans (chickpeas) and bits of onion (that must be the rest of the missing half-cup of vegetables). The flavor is as good as any Indian meal we've had out of the freezer case, and with 350 calories, 610 milligrams of sodium, and 7 grams of fiber, not bad at all in terms of the numbers. We'll give this a cautious thumbs up - it could definitely stand to do better in the vegetable department. 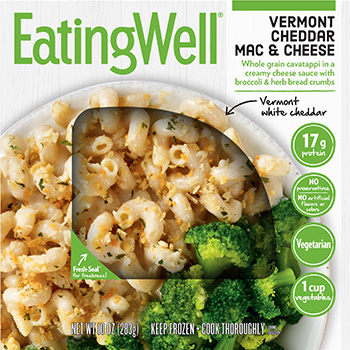 The Vermont Cheddar Mac & Cheese comes closer to fulfilling its "1 cup vegetables" brief: there are plenty of broccoli florets in this dish, and we found only one piece of stem that wasn't attached to a good-sized floret. That broccoli might be considered overdone if you had cooked them from fresh, but for a frozen meal the broccoli are pretty good: a little soft but still crunchy, with bright broccoli flavor.

Those broccoli are served over a dish of slightly overcooked cavatappi pasta (think spiral-shaped macaroni) in a white cheddar sauce that "looks more like milk than melted cheese" but proves to be plenty thick enough to satisfy the cheese lovers. It does have a more subtle cheddar flavor, however: "more like a home made mac and cheese than one from a box," said a panelist.

It's interesting to note that until we read the ingredients list we had no idea there were to be breadcrumbs in this dish. If you look closely at the picture on the front of the box, they're clearly there, but we didn't see them in the cooked meal. That doesn't mean they weren't there, but they certainly didn't add anything to the dish - or subtract, to be scrupulously fair. Breadcrumbs aside, we gave this one a thumbs up: "lots of veggies, pasta, good cheesey sauce, what's not to like?" summed up a panelist.

Read all reviews of EatingWell products »