(or, What They Say About Bad Pizza…)

I was inspired to bring pizza to our taste tests after recently having lunch with some colleagues. We ordered in from Naked Pizza and their gluten free crust is pretty darn good. (I can't speak for their regular crust, but others say that it is pretty fab.)

We have had some pretty good results with gluten free frozen pizzas, but nothing as good as theirs. I do understand that frozen gluten free pizza is more challenging, but there are some decent choices out there. Most are, however, complete pizzas, so I was intrigued when my grocery had three new frozen pizza crusts that all arrived the same week.

A disclaimer is due here. We don't always follow the instructions exactly on frozen pizza. For years our tests of pizza doughs have been done on a pizza stone. As with baking your own pizza from scratch, a super hot pizza stone serves to crisp the bottom of the crust and the pizza doesn't require added oil to keep it from sticking to a pan. We have always used a turkey pepperoni, Muir Glen tomato sauce, and shredded low-moisture mozzarella for consistency.

Starting with Chebe and following the instructions of removing the small square dough from the package and baking for 10 minutes resulted in disaster. It stuck to the pizza stone! We have NEVER had that happen. Starting over and using some aluminum foil and spray oil, the results were better - but not by much. The underside of the crust was a bit doughy, but we forged on undaunted.

I wish we had stopped at the pizza stone. The final baked pizza looked a bit like a Pop Tart and was terrible. This is not the worst gluten free pizza I have ever had (stay tuned for that) but it is really bad. The flavor is like you bit into a dish of chemicals. "Plastic and astringent" were words one taster used. No one wanted a second bite but I tried it anyway (remember, "We eat it, so you don't have to."). That was a mistake - the second bite was worse than the first. 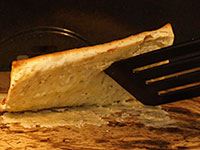 If all that wasn't bad enough, a single one of these Pop Tart-sized pizza crusts is 334 calories.

We had the exact same experience with the Nature's Hilights Brown Rice Pizza Crust. It also stuck to the pizza stone! Things started out more encouraging with a crispy brown looking crust. The instructions call for thawing the dough, cooking for 5 minutes, topping and then cooking directly on the oven rack. The instructions don't indicate how to precook and whether that is on a cookie sheet, pizza stone, pan, or directly on the oven rack. After the disaster of it sticking to the stone during the pre-bake, we elected to pre-cook on the rack. 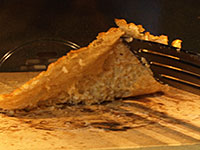 Like the Chebe, I wish we had stopped. This pizza dough smelled oddly of popcorn. While it was nicely crispy, the taste was odd. It took a while but one taster hit on it. It tastes like Wasa flatbread - "like someone made a pizza on a plastic cracker."

Just when you think that it couldn't get worse, we had our third pizza stick. Mind you, I have never made a pizza dough that stuck to a hot pizza stone or a pan. Three for three. 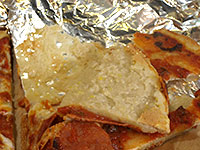 This time, with a frozen dough from Gillian's, I elected to follow the instructions and roll out the pizza on a "dusted surface" and then place on aluminum foil on a cookie sheet (the instructions call for a "pizza tin," something I've never heard of). I kneaded the dough with some cornmeal and then rolled it out. The result was a disaster. Not only did it stick to the foil (I wasn't going to risk it sticking to the cookie sheet), but the dough didn't bake in the middle. Undaunted, we did taste the dough and it was every bit as bad as unbaked pizza dough would be.

This is usually where I detail the nutrition information for you. I am not going to bother. None of these three were any good at all, so I won't waste the words. There are, however, some good choices in gluten free pizzas and you can link to our previous reviews here.

You know what they say about pizza (and sex)… When it's bad it's still pretty good. Not so with these three.