Just a month ago we discovered Scott & Jon's in our local grocery store. The Shrimp Scampi Pasta Bowl and Shrimp Alfredo Pasta Bowl yielded a split decision largely because of the amount of sodium - 690 milligrams of sodium for 280 calories is just too salty for us.

Today's offerings, to be honest, aren't likely to fare well, either: the Garlic Butter Shrimp Rice Bowl has 220 calories, 640 milligrams of sodium, and 1 gram of fiber, and the Cilantro Lime Shrimp Rice Bowl is no better, at 240 calories, 680 milligrams of sodium, and 2 grams of fiber. That's a sodium-to-calorie ratio of 2.9 and 2.8, respectively.

You might reasonably ask why we would review them at all?

Because good frozen seafood meals are few and far between. Even at $5.99 apiece, if they taste good and are widely available (I can't know this for sure, but appearing in two different grocery store chains in New Orleans is certainly suggestive), I want to make sure you know about them so you can have more seafood options - at least in your lunches.

Sure, I'd rather you made a lovely seafood dinner and took the leftovers for lunch the next day, but people find it hard enough - and intimidating enough - to cook fish or shellfish at dinner in the first place. Another seafood option that's easily cooked in the microwave would be nothing but a good thing.

That's the good news. The bad news is that the white rice is overcooked, and the worse news is that this isn't just salty by the numbers, it tastes salty. Shrimp have a beautifully salty flavor all on their own: I can't decide if adding this much salt to the dish is laziness or simply a poorly-trained palate on the part of their recipe development team.

It's almost not worth mentioning that brown rice would have stood up to microwaving far better than white rice and would have added more fiber and flavor. In the end, all our panel could say was, "Too bad." 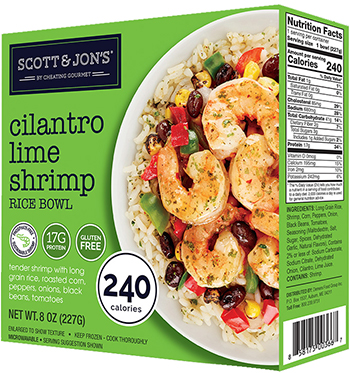 The Cilantro Lime Shrimp Rice Bowl did us a service: it helped our panel understand why people hate cilantro. We know that a genetic variation means that some people taste certain chemical compounds in cilantro more strongly than others, meaning that for them, cilantro tastes like soap. (And for these people I've answered Ask Dr. Gourmet questions about what to substitute for cilantro in recipes.)

There is so much cumin and cilantro in this dish (although oddly enough we could find nary an actual cilantro leaf), that the whole tastes bitter and soapy even to those on the panel who love cilantro. (Yes, it's also salty, but the bitter cumin and soapy cilantro flavor is simply overwhelming.)

Said panelists: "Now I know what people are talking about with the soapy cilantro flavor," and "Man, that's offensive."

Then we read the list of ingredients and noted that it "Contains 2% or less of: sodium carbonate, sodium citrate, dehydrated onion, cilantro, lime juice."

When people are trying to cut the amount of sodium in their dishes, sometimes they like to use salt substitutes like sodium carbonate or sodium citrate instead. They taste salty on the tongue, but the body doesn't react to these chemicals in the same way as it does sodium chloride (table salt). Which first of all makes me wonder whatever Scott & Jon's development team were thinking, adding salt substitutes when there's so much salt already: have they never heard of spices other than cumin and cilantro?

The panel summed it up: "The rice is [pretty] good. The shrimp are good. But WHHHYYYYYYYY????"