I love eggplant. When my wife found today's meals at our local Rouse's grocery store I have to admit I was jealous: none of their meals are gluten-free.

Angel Foods, according to their web site, used to be known as Dominex Foods: The Eggplant People. They pride themselves on having all vegetarian products with no GMO ingredients. These meals come packaged in recyclable paper bowls rather than plastic and are microwaved for 4 minutes or so. Simple and straightforward.

Eggplant, like white rice, tends to need salt to have good flavor. (Take a look at my Eggplant Parmesan recipe for comparison.) The three varieties we tasted for today's review all have between 500 and 600 milligrams of sodium - which is really reasonable for an eggplant dish. 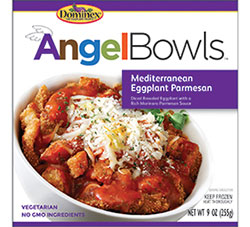 Their Mediterranean Eggplant Parmesan is almost exactly what it appears to be: eggplant parmesan. By no means should that be taken to be bad: it's really easy to do bad eggplant parmesan. Too often eggplant parmesan is over-breaded or over-cooked or too salty. This bowl is none of these. Angel has diced its eggplant into 1/2 inch dice and then breaded them, then topped them with a marinara sauce redolent of oregano and basil and with a bright tomatoey flavor. The eggplant holds up to cooking with an al dente texture and a fine eggplant flavor. The numbers here are 220 calories and 4 grams of fiber with 600 milligrams of sodium. 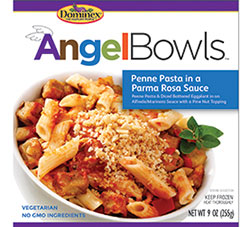 The Penne Pasta in a Parma Rosa Sauce includes more of the 1/2 inch diced eggplant, this time battered quite a bit less than in the Eggplant Parmesan. It comes with what Angel describes as an "Alfredo/Marinara" sauce. The panel couldn't quite see the "Alfredo" part of the sauce, however, describing it as "a marinara with cream added," according to one panelist, "but with a few red pepper flakes for kick." Regardless of its sauce's nomenclature, the meal is good: the pasta has "a nice bite" and the eggplant fine flavor, adding diced red bell pepper for a sweet counterpoint to the moderately spicy sauce. Two for two so far for Angel Foods, and this meal has even better numbers: 290 calories (a great dinner with a side salad!), 510 milligrams of sodium, and 5 grams of fiber. 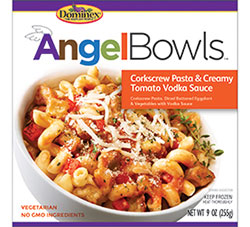 Our final bowl from Angel Foods is their Corkscrew Pasta & Creamy Tomato Vodka Sauce. The lightly-breaded eggplant dice appears here again and is as tender as we've come to expect. For the sauce, chunks of actual sun-dried tomato mingle with lots of parsley, oregano, and a bit of red pepper flakes to make a truly savory, creamy sauce with a whiff of vodka. Red bell pepper and tomato chunks round out the vegetables in this dish. The cavatappi pasta might be slightly less al dente than the panelists thought it should be, but they were unanimous in declaring this meal "one of the best frozen pastas we've ever had." The numbers? Very good at 260 calories, 540 milligrams of sodium and 4 grams of fiber.

Keep these on hand for your Meatless Mondays or any time when you don't have time to cook. Just add a side salad and you're good to go. We'll be on the lookout for more varieties!