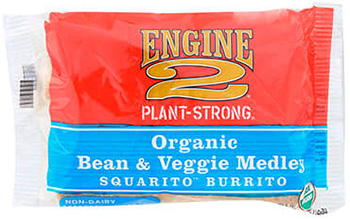 It's been over 4 years since we reviewed a product from Engine 2 Foods. There's no particular reason for it: until I spotted today's review items at Whole Foods I had thought that their products were limited to items such as veggie burgers (two of which we have reviewed) and packaged pasta dishes (i.e., uncooked ravioli dishes - not something we review in any case.)

But if Engine 2 Foods is getting into the burrito market - that's something we want to review.

For those who may be joining the Dr. Gourmet family more recently, a quick review: Engine 2 Foods was created by Rip Esselstyn, a firefighter and son of Caldwell Esselstyn, MD, author of "Prevent and Reverse Heart Disease," a diet based on flawed science.

It's a fairly restrictive diet briefly described as "vegan, no oil," and the so-called "research" is really anecdotal evidence. For most people the diet is extremely hard to maintain for the long term, and because it expects people to drastically change their diet in fairly restrictive ways forever, it's not sustainable for most people.

Yes, certainly there are those who can sustain such a diet for the long term. As a physician who treats a cross-section of patients, from the near-homeless schizophrenic to the CEOs of multinational corporations, however, I am here to tell you that most people can't give up olive oil and meat (just to name two types of items forbidden by Dr. Esselstyn's diet) forever. And to be accurate, the research shows that they don't need to. The benefits from healthy oils are clear and well-established and there is no evidence that avoiding all meat is better for you than consuming a moderate amount of lean meats. As I say to my patients, "If you want to give up meat and oil, great. But you don't have to give up meat and oil to be healthy."

With all that said, when we reviewed veggie burgers from Engine 2 Foods back in 2014, both items got thumbs up. When I spotted today's burritos in the freezer case at my local Whole Foods, I thought of those veggie burgers and hoped that these items would be just as good.

Each are described as a "Squarito Burrito" - a burrito folded into a square instead of a tube. "Why would you do such a thing?" a panelist wondered. "What difference does it make?"

As with many burritos, there are multiple sets of instructions for cooking these "squaritos." Fortunately the "preferred method" is for the microwave: you simply snip off the corner of the plastic bag around the squarito and microwave it for about 3 minutes, turning it over every minute. (We used the identical method, cooking them for 3 minutes total, for both items today.) You are further instructed to allow the cooked squaritos to cool for "up to five minutes," which we did to allow them to cool enough to eat. Even so, they were still quite hot to the bite.

Although we started our tasting with the Organic Bean & Veggie Medley Squarito Burrito (200 calories, 200mg sodium, 9g fiber), we should note that both squaritos are wrapped in identical tortillas made from whole wheat flour and dotted with flaxseeds. These tortillas were the first strike against these burritos. They come out of the microwave feeling "slimy," but soon dry to the touch, making it reasonable to pick them up for eating (a plus, to be sure). Unfortunately, they have "the texture of wet cardboard" and taste like "raw whole wheat flour." They're chewy and tough and are exactly the sort of flatbread that gives eating healthy a bad name.

The fillings aren't much better: the Bean & Veggie Medley filling was reported to taste overwhelmingly of tomato paste followed by unspiced kidney beans, some sort of textured vegetable matter, and enough chili powder to give the whole a faint burn on the tongue. "If it weren't for the burn it would be bland," said a panelist. "Boring," another said. "Essentially brown mush with some beans," said a third. 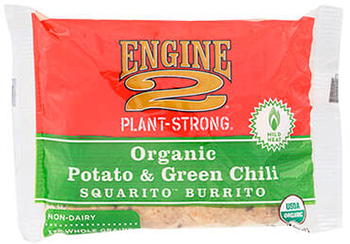 We had higher hopes for the Organic Potato & Green Chili (210 calories, 200mg sodium, 7g fiber): surely the green chilis would mean some more truly Southwestern flavor. Yet when we cut into the squarito we were less than impressed: the filling "looks like pea soup," - "or is that baby food?"

The list of ingredients puts potatoes first, followed by green chilis, corn, and poblano peppers. The filling is clearly just that: potatoes and green chilis have been pureed together into a bright green mush and are dotted with bits of roasted corn - nothing else is evident. The flavor of green chilis is so overpowering that only close attention (and the crunch) will tell you when you've eaten a kernel of corn. The package says it has mild heat, but one panelist described it as "at least medium - and a much longer lasting burn on the tongue than you'd expect."

The Bean & Veggie Medley might be barely acceptable ("if you were really determined to eat it"), but the Potato & Green Chili is simply inedible.

What is sad is that it's not that difficult to make food that's "vegan, no oil" that tastes good: I've done it myself for guests in my home. I can only wonder if the proponents of this style of eating think that people need to suffer in order to eat healthy: obviously I don't think that's the case.