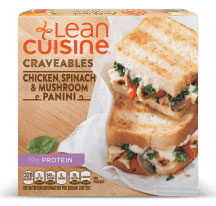 I must admit to being dubious about today's selection of sandwiches. Microwave a sandwich, and too often you end up with wet, slimy bread and overcooked filling. The idea of a panini made in a microwave seems like an even worse idea: paninis by definition are sandwiches pressed between two very hot metal plates, crisping the outside of the bread while melting the filling.

Lean Cuisine makes the attempt by using the same technique used to crisp the crust of pizzas in the microwave: the sandwich is packaged on top of a round piece of cardboard faced with a silvery metallic substance. Folding the outer packaging creates a stand that you put the sandwich and its round crisper on, then you microwave the sandwich, open-faced, for a couple of minutes. After letting the sandwich sit for a minute, you assemble the two halves and chow down. 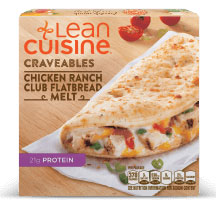 Contrary to our expectations, the bread does indeed toast well, if lightly, and turning the assembled sandwich over a couple of times as it cooled enough to eat prevents any sogginess. The sandwich filling is quite good, actually: the chunks of chicken are juicy and tender and both the spinach and the red pepper's flavors come through nicely. A fair amount of mozzarella cheese in a savory cream sauce make this "almost like a spinach pizza." On the other hand, the mushrooms are nearly undetectable - neither to be seen or tasted (although we did spot a couple of diced bits after separating the halves again).

The down side of this sandwich is the bread - but not for the reason we expected. Yes, the magic "REVOLUTIONARY GRILLING®" tray toasts the outside of the bread. And the sandwich does have 5 grams of fiber, along with 320 calories and 540 milligrams of sodium. But the panelists felt that the bread was more chewy than they would have wanted in a panini, and even worse, it became tougher and chewier as the sandwich cooled. "I feel like I have to take three bites of chewy bread just to get to the filling," said one taster. "Maybe if you cut the crusts off I wouldn't feel like I had to eat half the bread in the sandwich to get to the good stuff." That might not bother you, but we felt the bread-to-filling ratio just wasn't worth it: leave it on the shelf. 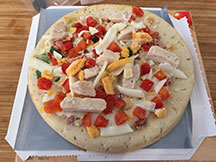 The Chicken Ranch Club Flatbread Melt (370 calories, 530 mg sodium, 4g fiber) does not look promising straight out of the box. As you can see in the picture, this is a scattering of a few bits of chicken and shreds of cheese along with minced bacon and a fair amount of tomatoes on what looks a lot like a 1/2-inch-thick pizza crust. Once microwaved on its silver stand, however, the flatbread proves to be quite soft and flavorful, with parmesan cheese crusted on the outside and a light garlic and oregano flavor to the bread itself. No wasted bread-to-filling ratio here - every bite was reported to include juicy chicken, savory bacon, and tomato along with "Yep, that's a Ranch-ey dressing right there." In short: salty, savory, and sweet on a soft piece of what's almost garlic bread.

Unlike the panini, allowing the sandwich to cool didn't significantly change the texture of the bread, which remained soft without becoming chewy. "It's like an Italian taco," said one panelist. "Thick pizza crust as taco shell," agreed another. This was today's big winner and would be great at lunch or even for dinner with a side salad.