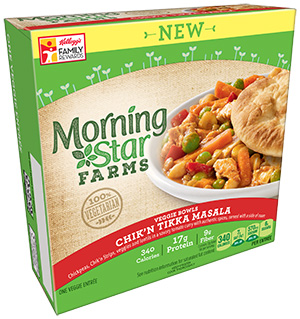 This will mark the first time we've reviewed any MorningStar Farms product.

In response to a reader's recommendation, we came close to reviewing their veggie burgers a few years ago when we reviewed quite a few veggie burgers. Unfortunately our local Whole Foods was out of the MorningStar brand at the time, so we reviewed the Sol Cuisine burgers instead. Even so, we tend to avoid products that contain meat substitutes: they tend to be both heavily processed and full of sodium.

But sometimes they're not quite so bad, which is why we have two Morningstar Farms Veggie Bowls to review today.

(There's always someone who will comment that people shouldn't be eating these meals at all and that they should be making their food from scratch. Sure. In a perfect world everyone has the time, skill, and inclination to make a fresh salad or sandwich or bring leftovers to work or school for lunch. But the fact is that my patients don't live in a perfect world, and some people are going to eat frozen meals or meat substitutes. Rather than shaming them for not making perfect choices, my goal is to help them make better choices in their realistic circumstances. That's why we do these frozen food reviews: people are going to eat them, so we help them make better, healthier, and tastier choices.)

To be honest, I hadn't been aware that Morningstar Farms did frozen meals (as opposed to ingredients or burgers), but these are labeled "New!" so perhaps we're not all that behind. The first item we tried was the Chick'n Tikka Masala, which has 340 calories, a fairly reasonable 570 milligrams of sodium, and an impressive 9 grams of fiber. This comes with a piece of naan, and the instructions call for the meal to be microwaved for a couple of minutes, then to remove the naan from on top of the meal and continue cooking the meal for another couple of minutes.

With two minutes to wait until the meal was cooked, we sat looking at the naan. One reviewer poked it: "It's kind of spongy," they reported. There's just a faint scent of yeast, and after tearing off a bite, another panelist described it as "pretty typical microwaved bread: damp and chewy. Not bad - about what you'd expect from frozen and microwaved bread." (To our surprise, the naan did not dry out while we tasted the rest of the dish but remained soft and palatable.)

Shrugs all around. The meal itself is far more impressive: this is a thick, stew-like dish full of garbanaos, peas, and julienned carrots along with bits of red bell pepper. The vegetables are softly crunchy and the garbanzos firm, giving the whole plenty of texture. The chunks of "chick'n" do sort of look like chicken, being the right color and having striations suggesting muscle tissue. Their flavor isn't strong but it does taste "sort of chicken-y," while the chunks have the consistency of extra-firm tofu.

The masala sauce is certainly a standout: the panelists agreed that its full-flavored sauce of tomato, onion, and spices were "as good as almost any Indian meal we've had," with a "mild, red-pepper-flake burn." A surprised thumbs up. 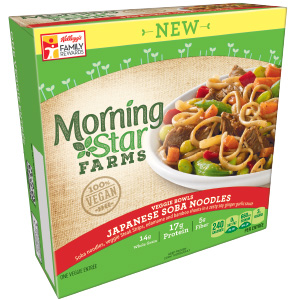 After the Tikka Masala we didn't expect much from the Japanese Soba Noodles (240 calories, 660 mg sodium, 5g fiber), which boast of "veggie Steak Strips." Yet again the meat substitute does look a lot like beef: again, the right color and striations might not fool a close viewer but doesn't shout "fake meat!" either. Alone, the "steak strips" taste like a lightly-flavored cross between pork and beef: "definitely umami but not as strong a flavor as real meat."

The dish has an overall scent of soy sauce, garlic, and ginger, all of which come through nicely. "There are A LOT of vegetables," observed a panelist - easily half the dish is vegetables, including slivered bamboo shoots, sugar snap peas, julienned carrots, and edamame (soybeans).

It's also a dish full of texture, with the firm crunch of the vegetables and the al dente soba noodles (an impressive feat all by itself). The dish does come in on the salty side, but it's "just noticeable - not enough to make me not want to eat it." Note that this meal, like the Tikka Masala, has a bit of heat to it (and neither are gluten-free). Both meals were voted "would definitely eat again:" we'll try harder to find MorningStar Farms' veggie burgers as a result.