Burritos. Wraps. "Street Wraps." "Breakfast Wraps" or "Breakfast Burritos". "Hot Pockets". How companies differentiate between the various product types - which are all basically fillings in a flatbread of some kind - isn't necessarily obvious.

I'm honestly not clear on the difference between Glutenfreeda's burritos and their "pizza wraps." The pizza wraps are wrapped in the same masa corn tortilla as the burritos we reviewed a few weeks ago; that tortilla is folded in the exact same way; and all, regardless of name, are cooked the same way. Perhaps Glutenfreeda is hoping to appeal to those who (if not forced to avoid them because they can't eat wheat gluten) would choose to eat Hot Pockets® (or even Lean Pockets)?

The Pesto Chicken Pizza Wrap now has more calories, sodium, and fiber (290, 490, and 5 respectively) than its previous version had of 240 calories, 450mg sodium, and 4g fiber. That doesn't mean it's better. 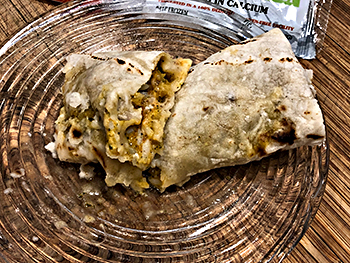 As mentioned, these are the same corn tortillas as in the burritos, with the texture of flour tortillas but a vagueish corn flavor.

A panelist took a bite and said, "What is this? Is this the sausage one?" When told it was the chicken pesto, he said, "I thought I was eating the other one."

It's a fair assessment: pesto is traditionally made with basil, parmigiano-reggiano, olive oil, garlic, and nuts (usually pignoles but sometimes walnuts). There's no basil flavor in this whatsoever. What it does taste like is "bad chicken tortilla soup."

We checked the ingredient list carefully, and indeed, it's clear that it's supposed to have some kind of basil flavor, as all the appropriate ingredients are present.

"The chicken is good quality, though," offered a panelist, "but it's not as advertised." We can't recommend it.

Its flavor is also much better: one panelist described it as "overly salty New Jersey floppy pizza, which isn't a bad thing." The sauce is a little sweet and the "floppy pizza" flavor comes from the soft, almost mushy tortilla. 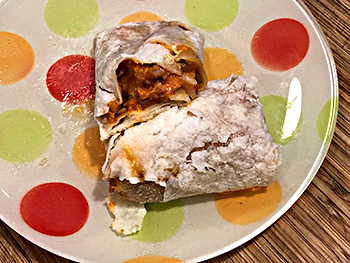 The best thing about this wrap is that there's plenty of good Italian sausage, and its fennel flavor complements the tomato sauce nicely. While Glutenfreeda cut the wrap's sodium by 80 milligrams, we felt that this was just a little too salty: Glutenfreeda could have cut another 100 milligrams of sodim from the dish and had even better flavor. There are no nitrites, however, and we liked it much better than the Chicken Pesto. If you're eating gluten-free and like your pizza in a tortilla, this is a pretty good choice if you watch your sodium intake in other ways that day.