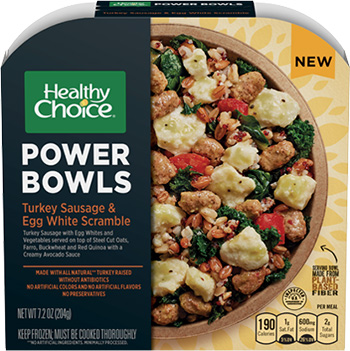 Healthy Choice's Power Bowls have been a bit of a mixed bag. The first two bowls we reviewed, the Chicken Sausage & Barley Bowl and Adobo Chicken Bowl, were a disappointment, mostly suffering from a lack of moisture. The second set, the Korean-Inspired Beef Bowl and Cuban-Inspired Pork Bowl, were much better, with far more flavor, good texture (to the meat) and a reasonable amount of both spice and sauce.

Today's meals are all about breakfast. Frozen breakfast meals seem to be the growth market in frozen meals: what happened to eating a package of yogurt or mixing some dried fruit into a microwaved bowl of oatmeal?

The Turkey Sausage & Egg White Scramble contains 190 calories, 600 milligrams of sodium, and 4 grams of fiber for a 7-ounce meal. That's an exceptional amount of sodium: more than 3 milligrams of sodium per calorie of product. On that basis alone we can't recommend it.

Here's what we saw when we took the bowl out of the microwave: 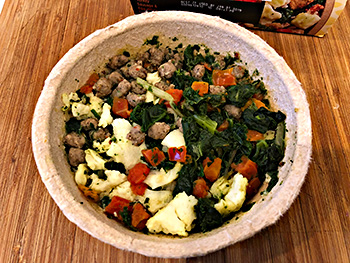 Given our past experience with these bowls, we're looking for a robust amount of greenery, a grain mix that isn't too dry, and add-ons (such as egg whites and sausage) that are both tender and flavorful.

The problem, as before, is that despite the positives of the sweetness of the roasted and diced tomatoes, the chunks of egg white tasting like eggs, the sausage crumbles tasting of sage and maple, and there being an inviting crunch from the quinoa and other whole grains, the salt nearly overpowers all of those flavors. The advertised "creamy avocado sauce" is nowhere in evidence, and if it had been, it might have mitigated the overwhelmingly salty flavor. Overall, the panel felt that those more used to a lower level of salt in their meals might find the dish tasty, while those with a higher tolerance for sodium might not find it flavorful enough. 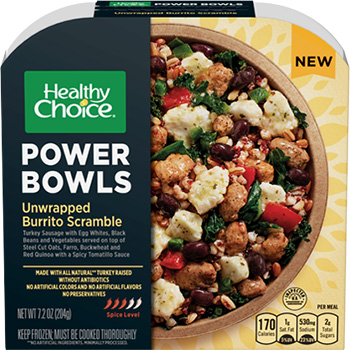 The Unwrapped Burrito Scramble has about the same ratio of salt to sodium as the Sausage & Egg White Power Bowl, despite its labeled spice level of 3 out of 5 peppers. In my experience, a spicier meal requires less sodium, but I suppose Healthy Choice must have found otherwise. 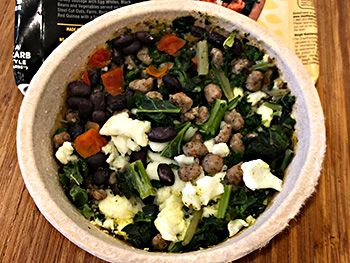 This has the same three grain mix as the Turkey Sausage & Egg White Scramble: steel cut oats, farro, buckwheat, and red quinoa, and the same crumbles of turkey sausage. This dish adds black beans, diced poblano peppers for a touch of spicy tartness, and a touch of tomatillo sauce. Once again, however, the actual product doesn't live up to the packaging: as one panelist opined, "Those stems are just off-putting," [referring to the 3/4 inch stems of kale in the dish]. Similarly, we couldn't see any of the advertised sauce, although we did taste tomatillo, cayenne, and the umami of the black beans.

The panel felt that these two dishes were essentially the same, with minor differences of flavoring "and far too much salt." You might feel these dishes, with their comparatively higher ratios of salt to calories, are just fine, but we can't recommend them.

Read all our reviews of meals from Healthy Choice »