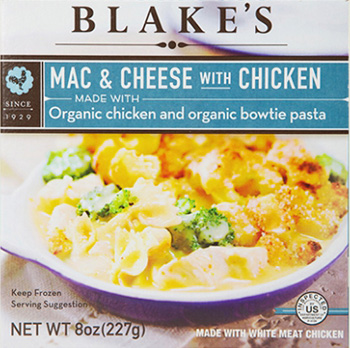 When we revisit frozen meals, I try not to read the previous review so that the tasting panel isn't biased by anything I might say about the food. When we started our tasting session for these meals, all I knew was that both had received a poor review in the past (we like to think that products are improved over time) and that the White Meat Chicken Pie was reviewed in 2013 and the Mac & Cheese with Chicken in 2012. After five years or so, it seemed reasonable to give them another try. Right?

Our first clue that this wasn't going to go well came when we pulled the White Meat Chicken Pie (290 calories, 650 mg sodium, 3g fiber) out of the freezer. We looked at the back to read the instructions and noted that there are both conventional and microwave oven options. Great! Except that the microwave instructions are only designed to reduce the conventional oven cooking time. You simply can't make the dish without an oven, which makes it hard for people to eat for lunch at work. Ah well. We turned on the oven to preheat and pulled out the Mac & Cheese with Chicken.

This is microwaved for 3-4 minutes, and when we removed the plastic overwrap we noted that the dish smells very "white cheddar cheese-y." It looks so "ooey gooey," however, with a few spots of liquid (fat) on top, that I checked the nutrition information: 17 grams of fat and 5 grams of saturated fat. According to the front of the package, this includes broccoli. No broccoli was visible on first inspection, so one of our intrepid panelists went prospecting for it, eventually extracting a piece slightly bigger than a gambling die and two bits. Really. That's it. Not even one good-sized floret in the whole thing.

As we looked for broccoli we found pieces of chicken, which look as though they had been pulled by hand, not cut with a knife. This may make them look more homey, but only if your rotisserie chicken is dry and stringy - even chewy in spots. Instead of being overdone and mushy, the farfalle pasta actually manages to be underdone to the point of chewiness. Worst yet, this doesn't even taste very cheesey: "Kraft Mac & Cheese actually tastes better," said a panelist. Greasy, dry, chewy, not cheesey? At $4.29 this has no redeeming qualities whatsoever. 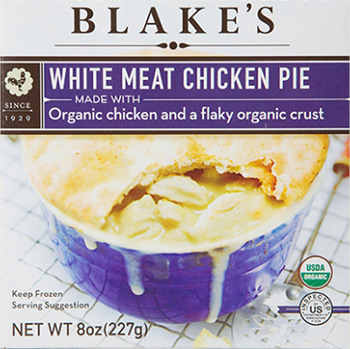 While we were tasting the Mac & Cheese, the oven came to temperature. We removed the plastic overwrap, then microwaved the White Meat Chicken Pie for about 3 minutes. (It boiled over while in the microwave, making a mess.) Then we transferred it to a cookie sheet and placed it in the oven for about 15 minutes.

When it came out, the crust was browned a little bit around a quarter of the edge, and although the rest was not as brown as we might like, it was properly cooked and tasted like a good pie crust: buttery, light, and flaky. We cut through the crust and into the pie to realize at least one of the reasons this dish had gotten a negative review five years ago: there are no vegetables. None. Zero. Not even onion for flavoring. The inside of this pie is yellow gravy and chicken - that's it.

The chicken itself is much more tender than the Mac & Cheese, but that's not saying much: "It's still stringy." And the gravy? Salty. You can taste every one of the 650 milligrams of sodium. The crust might be good, but that's just not enough to overcome everything that's wrong with this dish, and certainly not at $4.99. Leave both of these on the shelf.