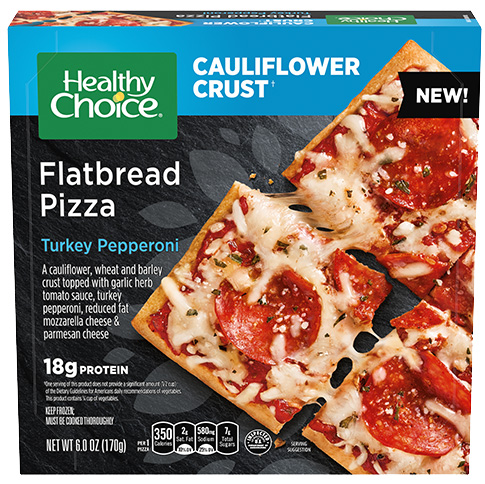 Single serving frozen pizzas do not have a good track record here at Dr. Gourmet. We've been reviewing frozen meals since 2006 or so, and recently spent some time removing reviews from our site for products that aren't made any longer. At the same time we also removed reviews that were ten years old - or older.

That pruning didn't materially change the fact that the vast majority of the frozen pizzas we have tasted should be avoided. Not for health reasons, like too much sodium or fat: they're just bad pizzas.

I was at the grocery recently and spotted today's review items. I'd thought that the make-everything-from-cauliflower fad had run its course, but Healthy Choice has come out with "Cauliflower Crust Flatbread Pizzas" and we brought all three varieties in for tasting. 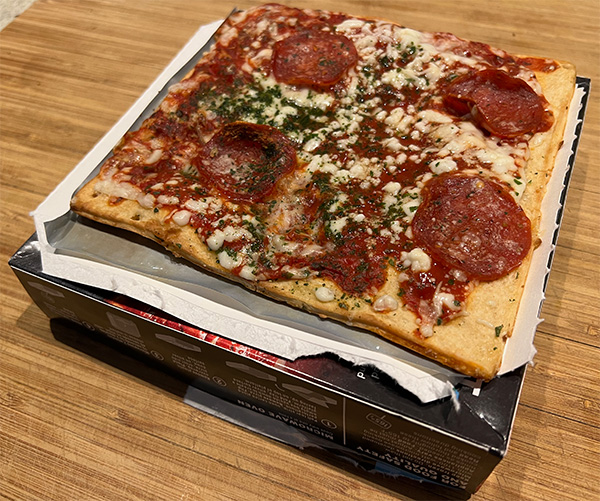 First, you should know that these are not gluten-free, because they're not cauliflower crust pizzas.

The "Cauliflower Crust" emblazoned on the package comes with an asterisk directing you to read the subheading on the package, which explains that the crust is made with wheat, barley, and cauliflower. In fact, the Ingredient Information for all three varieties we reviewed today lists the ingredients for the crust as follows: "Wheat flour, malted barley flour, cauliflower, pea protein, yeast, canola oil, sugar, salt".

The law requires that ingredients be listed by weight, so it would be more accurate to call this a "barley crust" than a "cauliflower crust". And yet here we are.

Similarly, in all three varieties the "pizza" was cooked in our microwave according to package directions atop a silvery-backed crisping stand made from the product's package. They are all about 5 inches square and are single servings.

The first variety we tasted was the Turkey Pepperoni, which has 350 calories, 580 milligrams of sodium, and 4 grams of fiber. Quite acceptable, really. Yet there are four (4) pepperonis on this pizza, one in each quadrant, and precious little cheese. The majority of the toppings is the fairly sweetish tomato sauce (with a fair oregano flavor), and the turkey pepperoni is... turkey pepperoni.

Just okay on toppings, but if you like pepperoni this is not going to be very satisfying. 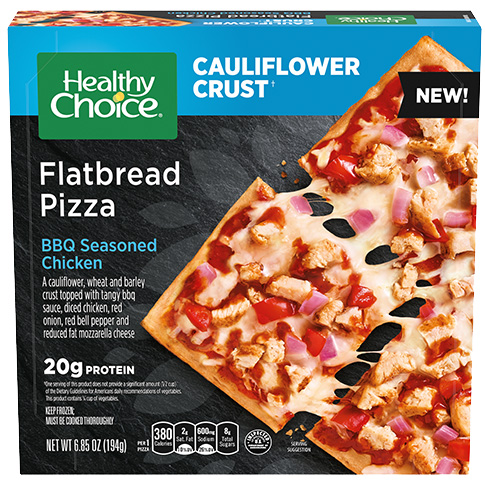 There's a sweetish barbecue scent to this pizza, and no wonder, as the pizza "sauce" is really barbecue sauce that's pretty heavy on the brown sugar. 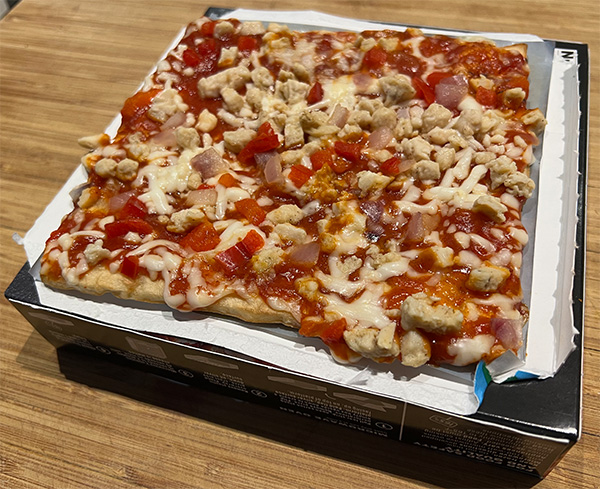 The chicken bits have a clean chicken flavor and you can taste the red bell peppers and the red onions, but overall the cheese is lost and it's like eating a very small bowl of diced barbecue chicken on the crust.

The Chicken Sausage Supreme Flatbread Pizza has 360 calories, 580mg sodium, and 4 grams of fiber, and an overwhelming scent of green peppers and fennel seed. 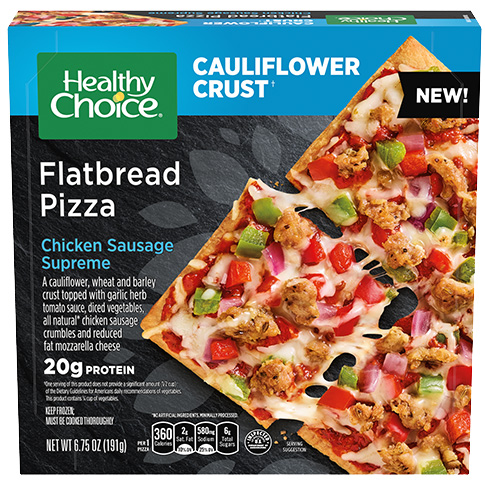 The chicken sausage here is uniformly grey in color and chewy in texture, and the sauce is so sweet that the peppers' bitter notes can't compete. 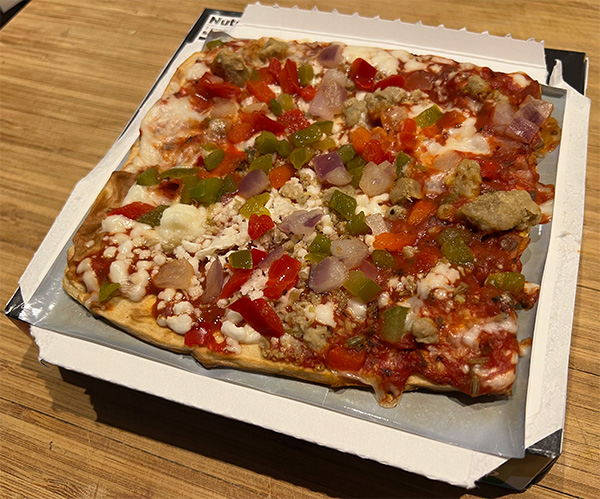 The crust on all three is identical: one of our panelists insisted that it was "just like New Jersey pizza" in that it is so limp that it can easily be folded or even rolled up.

Questions of pizza crust preferences aside, this crust is overly sweetish, has no yeasty flavor, and just out of the microwave has the texture of wet Wasa bread. It appears that the flatbreads are cut from a larger single piece, as some pizzas had edges that were thicker than others: in one case we found it difficult to cut through that thick edge even with a pizza cutter. If you do try these, keep in mind that you'll need to eat quickly: as the crust cools it becomes tougher and tougher.

Fans of New Jersey pizza might like these crusts, but we found the combination of floppy crust and sweet toppings to be not worth recommending.