Chicken with Almonds and Glazed Chicken from Lean Cuisine 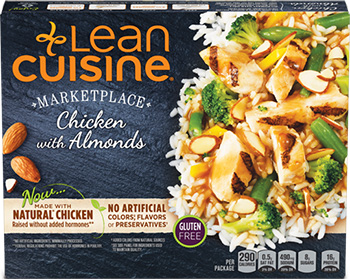 Speaking of the "big three" as we were last week, this week brings us two meals from Lean Cuisine, one new, one a revisiting. I have to admit that lately it seems that Lean Cuisine is really trying to improve the quality of their products by reducing the amount of sodium in them and at least appearing to make the effort to improve the amount of fiber. Today's items are a good example: the first, Chicken with Almonds, has pretty impressive numbers at 290 calories, a mere 490 milligrams of sodium (that is, "mere" when it comes to frozen foods), and a surprising 4 grams of fiber. The second, the Glazed Chicken, has 240 calories, 470 milligrams of sodium (what?), and a more customary 2 grams of fiber. Seeing sodium numbers under 500 milligrams for frozen food is still surprising - especially when you consider that meals from organic lines like Amy's regularly top 700 milligrams.

The Chicken with Almonds is as good as the numbers suggest (not great, but darn good): the meal has a soft aroma of soy sauce and ginger, which proves to be exactly how the sauce tastes. That said, there's a little more sauce than we thought was necessary, making the dish a little soupier than we'd like. There are smallish pieces of chicken that are a little dry - but "about what you'd expect from frozen chicken" (take that as you will).

The vegetables, which here include broccoli (unfortunately "about 90% stem"), 1-inch pieces of green beans, and julienned yellow carrots, are softly crunchy and retain their specific sweet and bitter flavors. The sliced almonds are crisp and their flavor cuts through the moderately sweet sauce handily. "What this needs," the panel said, "is some spice. Like red pepper flakes or something."

Indeed. The panel's overall take on this dish is that it's "nice, light Chinese food." Brown rice would have also added flavor - you'll notice the white rice wasn't worth mentioning in this review, being totally nondescript - and fiber, but overall, not bad at all. 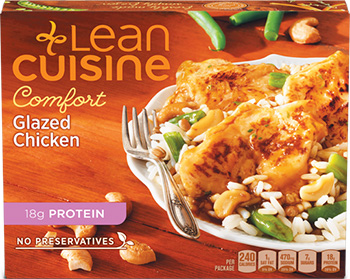 The cooking instructions for the Glazed Chicken (which we last reviewed in 2012 - and we really should have read that review before purchasing) are unusual for Lean Cuisine meals. Usually it's a couple of minutes in the microwave, stir, then cook some more, but this one directs you to cook it, unopened, for over 5 minutes. This left us with a fair amount of time to look at the packaging.

And read the ingredients.

Dear readers, if you've been following Dr. Gourmet for a while you probably recall my thoughts on High Fructose Corn Syrup: that it's a marker of foods that are too highly processed for you to eat. I have told patients (and you) repeatedly: "If you see High Fructose Corn Syrup on the ingredients list, put it back on the shelf."

If I had followed my own advice (or read our previous review), we wouldn't have been waiting five minutes to review this dish. On the package the ingredients lists reads as follows: "water, cooked chicken tenderloins, high fructose corn syrup, nodified cornstarch, sugar, corn oil, chicken broth, sea salt..." and so forth. Remember that the ingredients are required to be listed in descending order by weight. "Ew," said the panel.

Since we had the meal on hand, cooked and everything, we figured we'd go ahead and review it. (Granted, at this point we cannot be said to be without bias. However....)

The Glazed Chicken is another soupy dish. Extremely soupy. There are four largish, thin pieces of chicken that are clearly dried out on top, swimming in a brown sauce that one panelist described as tasting like "thinned canned gravy." There are maybe two tablespoonfuls of cooked white rice that's ever-so-slightly gummy, with a few bits of cashews and the odd wheatberry for texture. About a dozen pieces of green beans complete the meal. There's no lemon or tarragon flavor we could detect despite the description's claim of "a savory lemon tarragon sauce."

One panelist described it best: "It smells like amusement park restaurant food. It's supposed to look like it was cooked in a real restaurant kitchen, but it's really cooked in big steam trays, so it comes out looking OK but tasting kind of like dishwater."

To add insult to injury, the packaging and the product's information page at the Lean Cuisine website don't agree. According to the website, this meal has 610 milligrams of sodium, not 470, and the ingredient information begins as follows:

While a sodium level of 610 milligrams wouldn't all by itself have stopped us from reviewing the product, still - if you can't depend on the packaging to be accurate, how are you supposed to make healthy choices? Shame on you, Lean Cuisine. For both the HFCS and the inaccuracies.