We discovered Glutenfreeda back in 2011. As you can probably guess, all of their products are gluten-free. It seems that in 2016 they merged with another company, Lilly B's: an organic burrito company. The addition of the Lilly B's logo to their packaging was what reminded me to look at the brand again, and I realized that it was about time to revisit their products.

For today's review we have two burritos: their Chicken & Cheese Burrito, which may have been the very first item we reviewed from Glutenfreeda, and their Shredded Beef Burrito, which seems to be a newer product - we haven't tasted that one before.

Today's Chicken & Cheese Burrito has 200 calories and just 240 milligrams of sodium, which is impressively low. It's strange, though - the package states that it has 0 grams of fiber. None.

"That can't possibly be right," said one of our panelists. "There's also refried beans and rice, so there must be some fiber."

Sure enough, the Glutenfreeda website says it has 2 grams of fiber. Everything else appears to be accurate, but still, that doesn't engender a lot of confidence in their products, does it? 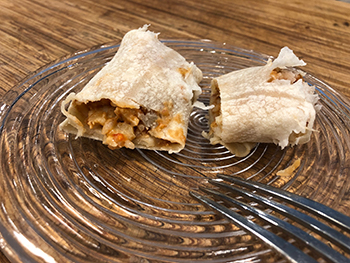 The tortilla itself is pretty darn delicious, made mostly with masa corn flour as well as some rice flour. This gives it a smooth texture and a sweet corn flavor with just the lightest hint of lime. The chicken inside is moist and tender with just a little zing of spice and a big hit of oregano. The corn flavor from the tortilla is strong enough that, as one panelist noted, "This is almost tamale-like." We don't taste much in the way of cheese, but the panelists agreed: Who cares? This burrito is excellent, and small enough (and low in sodium enough) that you could have two for lunch and be well satisfied.

The Shredded Beef Burrito isn't as good. We're not quite sure why, but after cooking, the tortilla - clearly intended to be the same tortilla as in the Chicken Burrito - ends up mushy in spots, shredding apart to reveal the filling. It still has that great masa flavor, though. 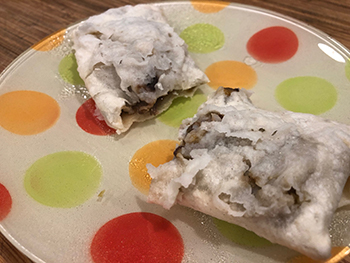 This burrito doesn't have as many calories as the Chicken, at 180 calories, but it does have more sodium: 340 milligrams (and 4 grams of fiber). Our panelists agreed that you could taste every single one of those sodium milligrams, noting that while the spice level in both burritos is fairly low - "just a little bit of zing" is how they were described - the Chicken's lower sodium level let the flavor of the chicken itself shine through.

Here the beef just tastes salty, with an oddly acidic aftertaste. We were a little disconcerted to note that although the label says "shredded," the more accurate description of the filling's texture would be "pureed" ("like baby food," said a panelist with recent experience with baby food). We couldn't see any evidence of rice or cheese, either - just pureed brown stuff. Overall, the Shredded Beef Burrito from Glutenfreeda isn't bad, but it's just not nearly as good as the Chicken & Cheese Burrito. We can't recommend it.

Read all reviews of Glutenfreeda's products »