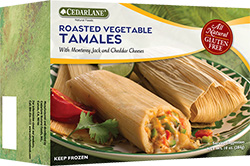 Tamales are challenging. Authentic ones are generally made from masa and lard, meaning that they come packed with calories. Over the years I have fiddled about with this formula using a lower calorie target and vegetable rather than animal fat to bind the cornmeal.

It was interesting when I saw tamales on offer in the freezer case at the market. Produced by CedarLane I was impressed with the numbers - mostly the reasonable amount of sodium in each tamale. We have had about a 50/50 track record in our review of products from this company, so it seemed a good chance for a review. Reading the ingredients list is always encouraging with their products, with almost nothing in that list that is not easily recognizable.

The cooking instructions call for wrapping the tamale in a damp paper towel and microwaving for 3 to 3 1/2 minutes. After a minute of cooling, remove the corn husk and you have a tamale ready for eating.

The first one up was the Roasted Vegetable variety. This came out of the microwave with a great aroma - almost like being in a good Mexican restaurant with scents of peppers, cumin, and oregano. After removing the corn husk I found the cornmeal dough to be thinner than expected but with a good firm texture on the exterior and a thinner but still very good cornmeal wrap surrounding the filling.

This tamale is spicier than most frozen meals on the market, and that brings a lot to the meal. The texture is also pretty darn good for a frozen meal. Granted, our expectations were low, but the dough turns out very light with all the flavor of cornmeal you would want without being pasty or greasy. The wrap is balanced by good creamy and cheesy filling that has flavors of bell pepper, onion and tomatoes.

The numbers are fairly good with total calories at 270. They are a bit high in sodium at 510 milligrams, which is more than we would like, but reasonable by frozen meal standards. Even though it doesn't taste very salty, it could likely contain less sodium given the other great spices. With 3 grams of fiber it's not too bad for a lunch and is quite filling even though the tamale is on the small side. 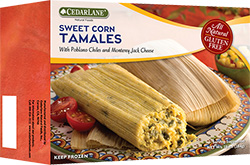 A lot of times when we test meals from the same company the difference between varieties is not all that great, so we expected their Sweet Corn Tamales to be similar, with a good masa dough wrap filled with corn, peppers and cheese.

The first thing noticed was that there were diced poblano mixed in the masa. The dough was completely different with a much sweeter and coarser texture than the Roasted Vegetable tamale. It was almost crumbly, and thus was harder to eat, having a flavor very much like jalapeno cornbread. There was, however, not much filling.

A great dish with good flavor and texture, but less like a tamale than one might expect. The numbers are better, with only 400 milligrams of sodium and a whopping 7 grams of fiber. At only 320 calories this makes a great lunch to keep on hand.

All in all, good meals from CedarLane and at about $5.00 for two tamales a good value - cheaper than almost any fast food meal.