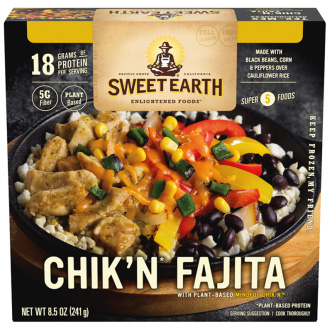 In our last few reviews of meals from Saffron Road it's clear that they've been expanding their flavor profile well beyond the burritos of their initial offerings. This hasn't been overwhelmingly successful, however. Generally they've been experimenting with Asian flavors and dishes: for example, in February of this year we reviewed their Veggie Lo Mein (thumbs up) and their Chinese Chik'n with Black Bean Sauce ("okay... but I wouldn't eat it again") and just last month their Korean Japchae ("some... will really like it"). Yet they've also branched out into Italian flavors with their Pasta Puttanesca ("like taking a big mouthful of olives and vinegar").

While on the one hand it makes sense to design frozen meals around strong flavors like those in Hispanic or Asian foods, in practice those companies who started their business in burritos (evol, Red's All Natural) and branched out to other offerings haven't seemed to deliver quite as well on the newer variations as they did on the simple burritos. 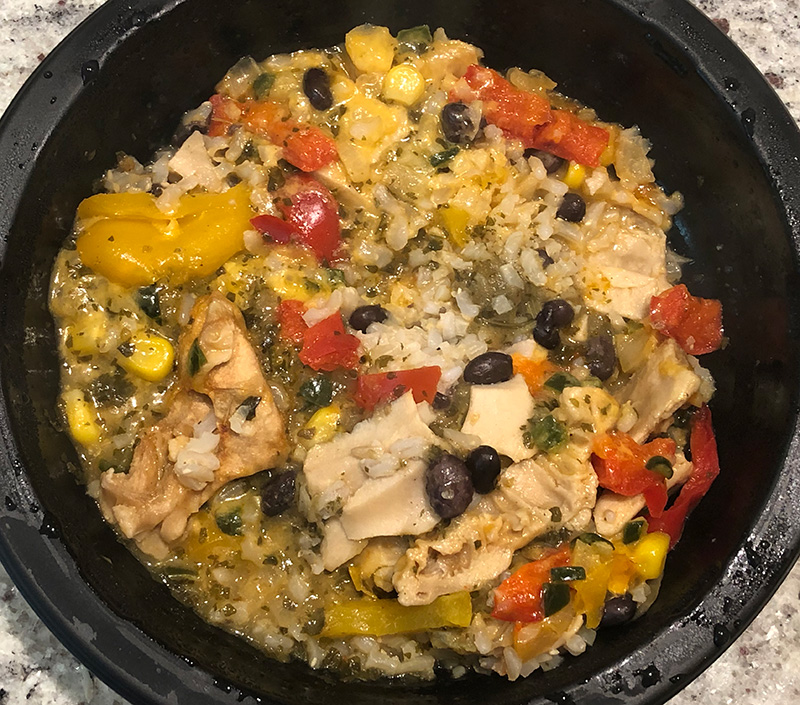 All that said, the Chik'n Fajita (260 calories, 530mg sodium, 5g fiber), is as good as you would want it to be. This comes out of the microwave with a sharp and tender scent of tomatillos and sour cream (although there's no sour cream in the dish). There's sweet and crunchy grilled corn, firm and savory black beans, and sweet red and yellow bell peppers to go with slightly overcooked brown rice (or is that cauliflower? the ingredient list includes both).

What's impressive about this dish is the "chik'n". If it were not labeled on the package as "mindful chik'n" made of soy protein, both my wife and I would have been fooled. She reports that the "chik'n" has a similar texture to steamed chicken - slightly rubbery - and the flavor is similarly soft and savory, like chicken. Some pieces, she said, were harder and chewier than others, but again, if she hadn't known she might have chalked them up to a piece of gristle as opposed to an overcooked piece of soy protein. Surprisingly (and gratifyingly) good.

On the other had, the Mindbender Quesadilla is a disappointment. 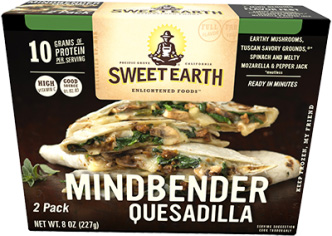 I should note at the outset that this package is a serves 2, with 210 calories, 270mg sodium, and 1g fiber per quesadilla. Sure, in theory if you ate both packages it still wouldn't be too outrageous at 420 calories, 540mg sodium, and 2g fiber - and certainly we've had other meals with a far higher sodium to calorie ratio that we gave a thumbs-up to. 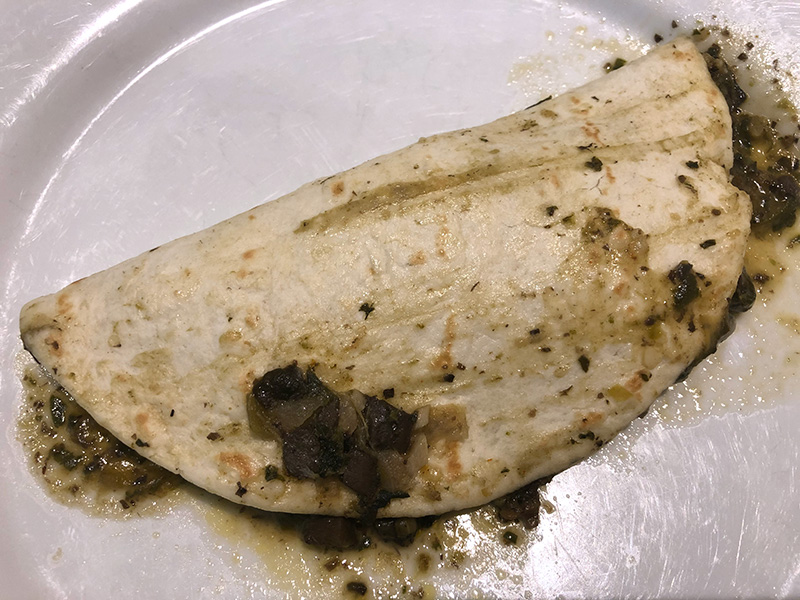 Yet this simply didn't live up to the description: "Earthy mushrooms, tuscan savory grounds, spinach and melty mozzarella & pepper jack".

The instructions for these individual quesadillas have you "tent" them with a paper towel on a microwave-safe plate and cook for 1 minute, 20 seconds. At the bell you have what you see above, albeit cold in the middle, which is about the best you can say for this.

This dish smells of nothing so much as nutritional yeast, that sour, salty, umami smell of 1970's health-food stores run by long-haired hippies who believe that your back pain can be cured with crystal healing.

Worse yet, that's what the filling tastes like, too. In addition to sour, salty, and a side of umami, it's also watery and tart - and there's no evidence of any cheese-like ingredients at all. My wife noted, "Why would you add fake meat for umami flavor when more mushrooms would work that much better?"

Leave these quesadillas on the shelf.