Smart Made by Smart Ones 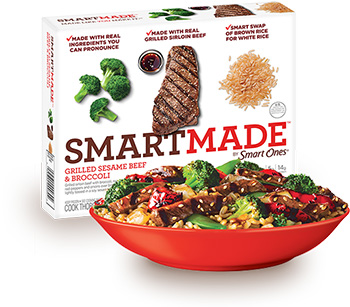 These Smart Made meals certainly seem like a good idea. All of their packages declaim, "Made with real ingredients you can pronounce!" and tout their "Smart swaps" - substitutions of healthier ingredients for less-healthy ingredients. And it's true that the ingredients lists we've seen thus far are all full of things that we can pronounce - mostly three syllables or less and not a "polyacrylate" or a "sorbate" among them. It's encouraging to see a frozen food company demonstrating awareness of people's concerns about the amount of processing in their food, as well as making those healthier choices on behalf of their customers. It's a risk, to be sure: as I said in the Health & Nutrition Bite from a couple of weeks ago, "The power of description," telling people a food is better for them will often deter them from ordering it.

Of course, if you've tried a few recipes from Dr. Gourmet you know that just because it's great for you doesn't mean it has to taste bad. (What? You mean you haven't tried a recipe?)

Certainly the Dr. Gourmet Tasting Panel is aware of that, so despite Smart Made's less-than-stellar track record with us, we appreciate their good intentions and are willing to keep trying. The Grilled Sesame Beef & Broccoli (220 calories, 610mg sodium, 5g fiber, not gluten-free) is a good example of fine intentions: the ingredients list shows a vegetable blend as the first (thus largest by weight) ingredient - that's a very good sign. Brown rice is indeed a "smart swap" for white rice. They even use low sodium soy sauce!

Along with several al dente broccoli florets, this dish includes softer strips of roasted onions and bell peppers (complete with decorative grill marks). The sugar snap peas also add crunch although we would have liked to see more of them. The small amount of brown rice (perhaps a quarter cup of cooked rice) has the typical slight chewiness of well-cooked brown rice, although its nutty flavor fails to come through in the overall dish. The beef (disappointingly described in the ingredients as "seasoned cooked grilled sirloin beef steak strips and corn starch product" - how is that a "real ingredient?") has the slightly stringy texture typical of a Chinese beef dish with a reasonably beefy flavor, although a couple of panelists said they could detect an undertone of "fishiness."

The panel was initially concerned about the sauce: "When it says 'pineapple juice concentrate' that's code for 'disgustingly sweet'," as one panelist remarked on reading the ingredients list. It's surprisingly subtle, however. The dish smells "like a good Chinese restaurant:" of beef, soy sauce, garlic, and bell pepper. The overall effect is of just a little pineapple-teriyaki-soy sauce.

Perhaps too little? The panel kept taking bites in hopes of finding the flavor punch they were looking for, to no avail. This needed "not more salt [it has plenty, to be sure], but definitely more spice," the panel agreed. A thumbs up if you like your Chinese "a bit toned down," as it were. A few red pepper flakes or a dash of hot sauce would go far to add oomph to this dish. (Make your own Beef with Broccoli with my recipe.) 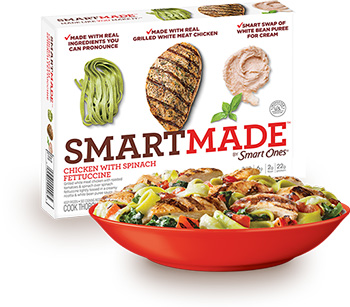 The Chicken with Spinach Fettuccine (220 calories, 630mg sodium, 2g fiber, not gluten-free), on the other hand, doesn't suffer from lack of flavor. The sauce makes a "smart swap" of white bean puree for cream, although that's a bit misleading as there is still some cream in the sauce (per the ingredients list). That works well to provide creaminess and that all-important mouth feel - the way the flavors are spread around your mouth for best effect. (Chef Leah, at The Goldring Center for Culinary Medicine, likes to use white bean puree in her Caesar Salad Dressing - less fat, just as creamy.)

No, this is one of the better pasta dishes, flavor-wise, we've had in a while: the creamy sauce has a fine ricotta and garlic flavor, which complements the bittersweet spinach and "very pretty" tart-sweet yellow tomatoes. The down sides, however, are small, but too numerous: the spinach pasta is overcooked, a panelist bit into a big chunk of what was probably the stem of the spinach plant (it looked like a green stick), and the chicken... It's the chicken that really killed our enjoyment of the dish. Two quite large slices of meat-like-substance (about 4 inches by 1 inch by 1/2 inch) make it clear that these pieces of "chicken" are formed, not sliced - and they are dry, dry, dry. And tough, the panel pointed out: "you can hardly cut these things with a metal fork - what if you only had a plastic one? Forget it," they said.

This is one time that smaller pieces of chicken might have served the dish better, allowing the person eating to offset the dryness of each bit of chicken with the much better sauce. (Our ad hoc testing confirmed this.) Despite the sauce, however, we just can't recommend a dish where the main source of protein is this bad. Leave it on the shelf.