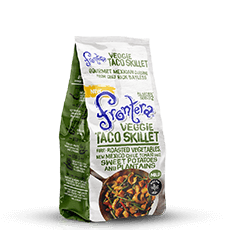 Today's offerings are from his Skillet meals, which are designed as (nearly) all-inclusive meals that serve two with the small addition of canola oil and water (see below for "serving suggestions").

I've resisted reviewing these 'serves 2' frozen meals-in-a-pouch, regardless of the manufacturer, because it's my contention that it's just as easy - not to mention healthier and often cheaper in the long run - to make your own meals at home from scratch.

That said, our raison d'etre here with Dr. Gourmet's Food Reviews is to recognize that while the healthiest options for people involve cooking from scratch, not everyone will feel that they have the time, money, or [insert other barrier - for example, equipment] to actually make those meals from scratch - and with those barriers in place, they may choose to make these serves-two skillet options instead. These are perfectly valid reasons to not cook from scratch, and it's important to recognize that as a barrier to eating more healthfully.

Instead of shaming people for making those choices or pretending that they don't make these choices, it's smarter to guide people towards the best-tasting, healthiest options in the event they do make those choices, while also reminding them that it isn't much more difficult to make those same items from scratch.

With respect to these 'serves two' pouches from Frontera Foods, we chose to start our tasting with the Veggie Taco Skillet. The instructions for this product tell us to "heat large non-stick skillet over med-high heat until hot, about 2 minutes." Then "add 1 Tablespoon canola oil and meal to skillet." This is how it looks when you pour the frozen contents of pouch into the skillet: 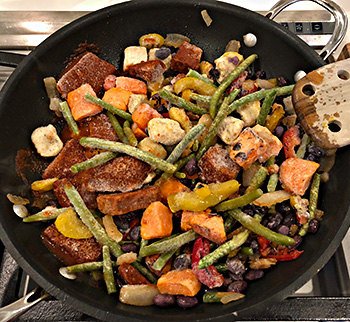 You add 1/4 cup water to these frozen vegetables, plantains, and black beans that are mixed with chunks of frozen sauce. Then the whole is sauteed, uncovered, for about 9 minutes, until the chunks of sauce are melted, heated through, and reduced.

As is our habit, we tasted the dish alone, with no additions. This is a rich, savory dish with meaty black beans, crunchy green beans, and a savory sauce resonating with ancho chili flavor. The plantains and sweet potatoes are soft but not overcooked and lend a sweet note of punctuation to the dish. It's not spicy, but it "definitely packs some lingering heat."

The packages for both varieties tested today offer a serving suggestion: "Serve hot in warmed tortillas or over rice. Top with fresh cilantro and queso fresco."

The Veggie Taco Skillet itself has 260 calories per serving (remember this product contains 2 servings), with 360 milligrams of sodium and an impressive 13 grams of fiber. One tablespoon of canola oil for the 2 servings adds 62 calories per serving, but no sodium or fiber, making this dish 322 calories per (prepared) serving. Add 1/2 cup cooked brown rice, at about 124 calories, no sodium, and another 1.2 grams of fiber, and this could be an excellent lunch or light dinner with the recommended sprinkle of cilantro and cheese.

The Veggie and Bean Taco Skillet (190 calories, 500mg sodium, 11g fiber per serving) has similar cooking instructions and also calls for 1 Tablespoon canola oil, resulting in 252 total calories per prepared serving. Here's what it looks like before cooking - note the little green bricks of what appears to be the tomatillo-based sauce along with the yellow bell peppers, chard and spinach, white beans, chunks of red potatoes, and chayote squash (known here in New Orleans as mirlitons): 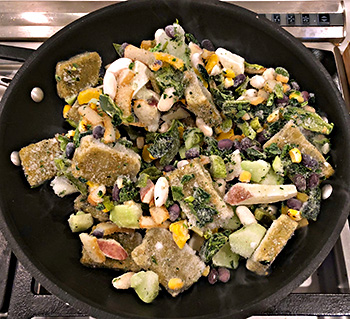 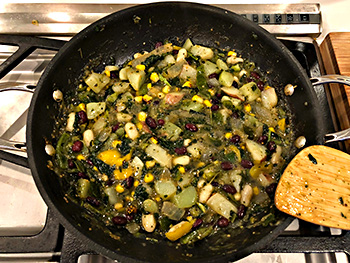 The chayote remains almost crunchy and lends little tart pops of sweetness along with the roasted corn. The "refreshingly green-tasting" tomatillo-based sauce isn't overwhelming, but it does have definite cilantro and lime notes (cilantro-haters, beware). You might expect the red potatoes to become mushy, but they aren't - they're "just soft enough to be tasty." That said, those red potatoes might have been better left out - the dish has 500 milligrams of sodium per serving, and every single one of those sodium milligrams seems to have been absorbed by the potatoes: overall, the dish is "almost not salty enough." Once again, this would be great over brown rice or in corn tortillas with some lettuce and a bit of cheese.

We stored part of both of these skillet dishes in the refrigerator overnight and tested them again the following day: they make great leftovers. If you live alone, these could be a good option: eat half for dinner one night in tacos and then have the other half later in the week over leftover brown rice. Two thumbs up from the Dr. Gourmet tasting panel.

Read all our reviews of meals from Frontera Foods »