Shocking though it might be, I was actually looking forward to testing today's meals from Healthy Choice. They've been putting out some fairly good meals lately (like last month's Rosemary Chicken and Sweet Potatoes and Roasted Chicken Verde) and I was hoping for another double play. Especially because today's meals are both, at least nominally, shellfish: Garlic Herb Shrimp and Lobster Cheese Ravioli. A quick look at the list of almost 200 reviews we've done over the last few years shows precious few fish or shellfish items. Not surprising, as they don't stand up well to microwaving, but that means I'm always on the lookout for fish or shellfish meals - and have high hopes of them when I do.

Today, however, is one of those days that I'm reminded of our Dr. Gourmet's Food Reviews tag line: "We eat it, so you don't have to.™" 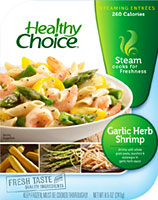 We started with one from the Healthy Choice Steaming Entrees line: Garlic Herb Shrimp. It looks promising, with its bright green asparagus and yellow squash, and it smells great in the microwave - nice and garlicky. We allowed it to sit, covered, for two minutes (as directed in the instructions), then uncovered it to find that the sauce is really watery. This isn't unusual, so we let it cool for a minute or two to allow the sauce to thicken.

Yet the sauce didn't thicken all that much, and as I stirred it to distribute the sauce I noticed the shrimp. Or rather, the lack of shrimp. There sure aren't many in this dish. Curious, I pulled out my kitchen scale. After digging through the (still thin) sauce we ended up with 6 - yes, SIX - shrimp, each of which were the size of a quarter. Weighing those six tiny shrimp yielded a whopping 1/2 ounce of shrimp. That's it. One. Half. Ounce.

The good news is that the asparagus were still crunchy and well cooked, as were the yellow squash. The whole grain pasta wasn't too overcooked, either. But the sauce was entirely flavorless: "Another triumph of garlic-scented nothing," said my wife. Thumbs down - way down - on this one. Flavorless and stingy. 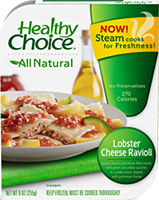 Next was the Lobster Cheese Ravioli. You may recall that when we reviewed the Tortellini Primavera Parmesan a couple months ago, the tortellini that were not covered in sauce got dried out into little bullets. Unfortunately, the same thing happened with some of the ravioli in this dish. Two of them were turned into cardboard, and when there are only five ravioli (after counting the shrimp I had to count the ravioli, too) that's, as they say, not nothin'.

I do love to look at the packaging on meals like these. The pictures on the front are labeled "Serving Suggestion," as if to warn you that no, the meals don't really look this good. And they don't. The plump little ravioli on the front of this box bear absolutely no resemblance to the ravioli you actually get. I cut each one in half and noted that there might be 1/2 teaspoon of filling in each of these 2-inch-wide ravioli. That filling might have been good if 1) there were enough filling to taste, and 2) if it weren't completely overpowered by the sauce.

Yes, the sauce. You know the sauce is sweet when it smells sweet in the microwave. And this is sweet. Really sweet. Cloyingly, stickily sweet. Like Campbell's Tomato Soup but with more sugar.