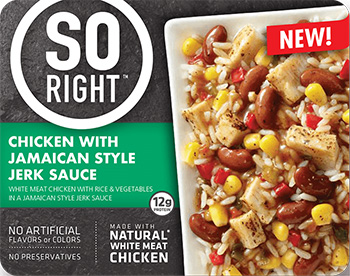 Last month we discovered the brand So Right®. With packaging similar to that of Michelina's (which does not enjoy a particularly good reputation here at Dr. Gourmet), I think we had an unconscious bias against them, but even so, the first two meals we reviewed from them were given a thumbs down mostly for their (generally "one-note") flavor, not their quality. The company that makes So Right frozen meals is clearly trying hard, so we kept an eye out for other meals we might review.

Like last month's meals, this week's meals look promising because they seem to be relying on stronger flavors, like jerk seasoning and a combination of sweet corn and tart/savory poblano peppers. We've seen that frozen meals with spicier flavors seem to fare better in reviews, but on the other hand, I believe we thought the same thing about the So Right meals from a month ago - and ended up giving both of those a thumbs down.

The panel agreed that the Chicken with Jamaican Style Jerk Sauce (310 calories, 540 mg sodium, 5g fiber) smelled promising enough as it cooked in the microwave: "Smells like allspice," they noted, "and cinnamon" - both important spices in Jamaican jerk. The trick with Jamaican spices, however, is to balance those sweeter jerk spices - allspice, cinnamon, nutmeg, and cloves - with the savory notes of cumin, coriander, thyme, and chipotle or cayenne.

This dish includes white rice, red kidney beans, yellow corn, and red bell pepper to make a colorful dish. The half-dozen or so bits of chicken aren't more than 1/2 inch square each - and a bit dry - but the rice isn't overcooked, the kidney beans are firm and meaty, and the corn is crunchy, giving the dish a nice varied texture. At first the sauce seems only moderately sweet, but after about three bites the spice begins to creep up on you, leaving a moderate burn at the back of the tongue.

As with the meals from last month, the panel had a hard time deciding whether to give this dish a thumbs up or down: while the ingredients are all fairly well executed on their own, they didn't impress the panel as a coherent dish. "There's no depth of flavor," they agreed - much as they did last month. The jerk spice "began sweet, ended spicy, and nothing in between," they said. Overall, "Not bad, just not very complex." 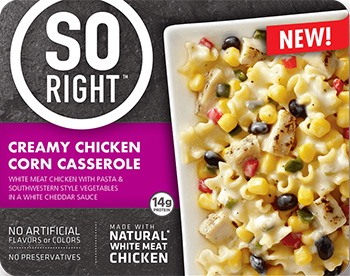 After noting the surprisingly small amounts of chicken (or chorizo) in the last three meals from So Right, a panelist insisted on measuring the actual amount of chicken in the dish. Quickly, before the dish got cold, we dug through the cooked dish and found all of the (mostly tiny) bits of chicken and weighed them on my digital scale: 0.7 ounces. I haven't done this in probably almost ten years, but as I recall the last time I weighed the animal protein in a frozen meal (that included animal protein, to be precise), it also contained less than 2 ounces - and in some dishes it could be significantly less than 2 ounces, as here. (Recall that a typical serving of animal protein is about 4 ounces.)

Small amount of animal protein aside, this dish went over well with the whole panel: this is a super creamy pasta dish with a light white cheddar sauce that has a sweet-corn-chowder-like overtone (think corn chowder soup made into a pasta sauce). It's spiked with corn kernels for crunch and pops of sweetness, along with diced poblanos as a tart counterpoint. A few black beans add savory notes, and the diced red bell peppers are sweet and tart as well. There might not be much chicken, but it's not dry, the pasta is a little overcooked (but not unacceptably so), and the dish doesn't taste salty despite its higher sodium level. The panel insisted on "tasting" this until it was gone: thumbs up for the Creamy Chicken Corn Casserole.

Read all our reviews of meals from So Right »