Tamales are hard work. I've tried and tried to create a healthier tamale recipe and they're generally good but never quite good enough. There's the issue of trying to balance all that fat from lard with the fact that it's a key component in the texture of the recipe. I've resigned myself to the occasional indulgence of restaurant tamales with the don't ask don't tell policy toward what is actually on my plate.

A guilty pleasure to be sure.

This is why I was a bit surprised to see that the folks at Amy's have frozen tamale meals in the freezer case. Mind you, this one is a bit easier to freeze because of the texture of the corn meal and the fat involved. Still, a bit of a risky enterprise. 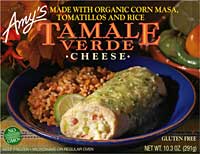 The Cheese Tamale Verde is pretty good. Not fantastic, but pretty good. The texture of the tamale is not too dry and has a good masa flavor. There's not much cheese filling – just enough to recognize it. The salsa verde is what helps this be a successful frozen meal, however. It's good and fresh tasting goes well with the tamale. The side dish is a brown rice and black beans seasoned with southwestern spices. All in all a good effort.

There is a lot of fat: 16 grams for only 360 calories. Not outrageous but it appears that it's not coming from the tamale but from the cheese. I learned this by comparing the Nutrition Facts with another tamale offering, Roasted Vegetable Tamale. There's only 7 grams of fat and 280 calories. That tells me that it's not the fat in the corn masa that is the issue. 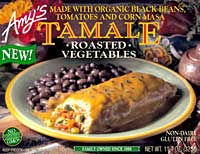 That Roasted Vegetable Tamale meal is only fairly good (and it's not because of having less fat). Similar tamale but with an only fair veggie filling and topped with a chili sauce that is pretty generic tasting. Instead of rice, this one comes with similarly generic black beans. Not a bad meal but not as good as the cheese tamale.

All in all a bit of a surprise. Pretty good tamales from the freezer and the only bad part (as is usually the case with Amy's) is that there's too much sodium. Both come in at the 700 mg range.

So, if you just have to have tamales, these are a good choice for you. Unless you're willing to wait and have the real thing as an occasional splurge like I do.