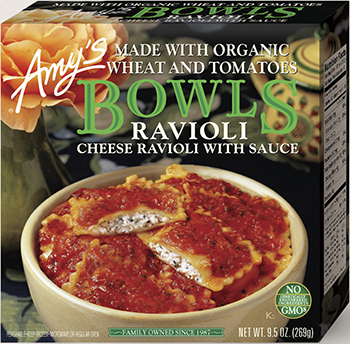 When I'm choosing what to review for each week, there are a few criteria that come into play. First, I try to vary the companies, so that I'm not repeating brands too frequently. That one's pretty easy. Then I look for products we haven't reviewed before, and after ten years and over 1,000 products, that's a little more difficult. Those new products also have to be under 700 milligrams of sodium, which makes it even more of a challenge.

The products also have to be available at my local grocery stores: sure, not every variety will be available, but I figure the stores in the New Orleans Metro area are probably pretty typical of much of the United States, so if I can find it, you probably can too (sorry, international readers).

I realized the other day that it had been quite a while since we had reviewed anything from Amy's. In fact, the last time we reviewed anything new from Amy's it was their Gluten Free Black Bean & Quinoa Burrito and Southwestern Burrito late last year. (Spoiler: both failed the microwaving test.)

Our local Whole Foods Market carries a fair selection of Amy's products, and as I looked for something new from them to review I remembered why it had been so long: the sodium in their products tends to be pretty high. I did find one product new to me: their Cheese Ravioli Bowl (380 calories, 680 milligrams sodium, 4g fiber).

This is exactly what it claims to be on the label: cheese ravioli in tomato sauce. It comes out of the microwave smelling overwhelmingly of oregano, but fortunately in this case the scent does not translate to flavor: the sauce has a savory-sweet, almost sun-dried tomatoey flavor and a definite note of oregano that's fairly well-balanced with basil. 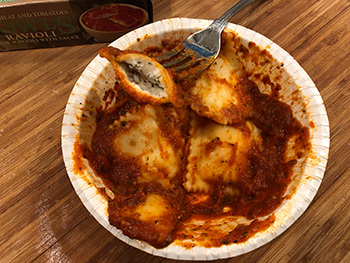 The nine ravioli could have been a little better filled - we cut one in half so you can see - but the ricotta cheese flavor cuts through the assertive tomato sauce nicely. The pasta isn't too overcooked, being rather chewy, but overall it's "pretty darn good."

Yet we were on the fence about this one. The first words out of the first taster's mouth after simply tasting the sauce were: "Wow. This is salty."

You can taste every single milligram of salt in this dish, and that's the problem with so many of Amy's products: they're just unnecessarily high in sodium. Some of our panel members felt that a .6 ratio of calories to sodium was acceptable, others did not. With so many dishes available that are actually lower in sodium (not to mention the calories to sodium ratio), I had to give this one a thumbs down. 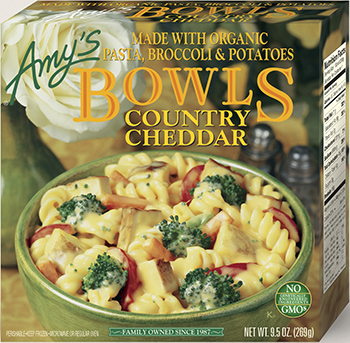 We reviewed the Country Cheddar Bowl back in 2008 (yes, more than ten years ago), and the "Light in Sodium" Country Cheddar Bowl in 2016. Today we revisit the "full sodium" version, which according to our records had 400 calories, 19 grams of fat, and 690 milligrams of sodium in 2008. The 2019 version has the same amount of sodium with a few more calories (430) and more fat (21 total, 6 grams saturated fat).

All I can say now is that our standards are quite a bit higher than they were in 2008.

I watch a fair amount of British television, and a recent advert caught my attention: a young girl is seated at the dinner table, looking unhappily at a plate full of broccoli. Mom adds melted cheese to broccoli and girl happily eats broccoli. As you might guess, the ad is for cheese.

This dish reminded me of that ad. 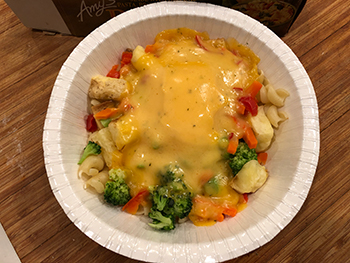 It's as if the dish were designed for people who don't like vegetables: it's (overcooked) rotini pasta with chunks of (overcooked) Idaho potato, a scattering of (overcooked and mushy) broccoli, some diced (and overcooked) julienned carrots, and (overcooked) diced red bell pepper.

"Really? Potatoes and pasta in the same dish? Why?" panelists wanted to know.

According to the package there's tofu in this dish. We had to look for it (it looks a lot like the potatoes, to be honest) and discovered that it comes in the form of bits that are 1/2 inch by 3/4 inch but only about 4 millimeters in diameter: "something like thick bits of tape." They have the most texture of anything in this bowl, being fairly chewy (but still having no particular flavor).

All this is topped with what is essentially a scoop of cheap cheddar cheese that is so thick even after melting that when you stir it into the dish it turns the contents of the entire bowl into a "pile of gooey glop."

This might be good for children who are sodium-deficient and hate vegetables (and perhaps food in general), but nobody else should eat this. As the panel put it: "Just no."