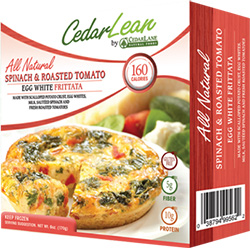 CedarLane doesn't have a very good record with us, running about 50:50 thumbs up and thumbs down. While the reviews we have here at DrGourmet.com have focused on the higher levels of sodium, it's what doesn't appear on the site that's the bigger problem: so many of their single-serving dishes are labelled 2 servings. This is simply obnoxious behavior from any frozen food company, but it's particularly bad when the item in question is a single burrito. Really? Somebody's only going to eat half of a burrito? Dream on.

Add to this our general dislike of reviewing breakfast foods: having a good breakfast is so easy that spending the money on questionable frozen foods just doesn't make sense. We have, however, reviewed a few (okay; more than a few) because people ask us to. But when I saw today's items in the freezer at our local Winn-Dixie, I was intrigued - and a little skeptical. Egg dishes don't usually freeze well: they tend to get grainy and mushy. But the numbers are surprisingly good, and yes, I double-checked to make sure these weren't 2 servings.

Wow. These are great. Not just good, but great.

Despite the presence of oven instructions, we chose to microwave these. Our testing microwave is a bit more powerful at 1200 watts than most people's, so as usual we chose the lower end of the 2 to 2 1/2 minutes recommended. As it happens, this yielded a frittata that was slightly cool when we touched the underside of the package, so back in it went for another 30 seconds, which made it hot all the way through. Bear this in mind if you have a less-powerful microwave.

Both varieties we tested use scalloped potatoes as the crust, which is a great decision, and not only because it means it's gluten-free. People seem to like potatoes with their breakfasts, and with a potato crust you have everything in one convenient package. When we first forked into the Spinach & Roasted Tomato frittata we immediately encountered resistance and feared for a moment that there might be far too much potato for the amount of egg mixture. This wasn't the case: the potatoes are simply not overcooked to mush and add a bit of texture. And speaking of texture, as we expected the eggs are indeed a little grainy, but it's not nearly as bad as it could be. It might be worthwhile to try this in the oven just to see if that might make a difference.

There's plenty of shredded spinach to add its characteristic bitterness to the sweet roasted tomatoes, and the herbing is spot on. Just enough oregano without being overpowering. With 160 calories, 300 milligrams of sodium, and an exceptional amount of fiber (5 grams) to go with its 10 grams of protein, having one of these for breakfast will definitely hold you until lunch. 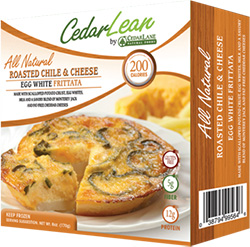 The panel liked the Roasted Chile & Cheese frittata even better than the Spinach & Roasted Tomato (the panel does like its spicy food). The same scalloped potato crust is filled with strips of roasted poblano peppers and a savory mixture of Monterey Jack and fat free cheddar cheeses. This is actually one of the few times that I've seen fat free cheese used well in a frozen meal - fat free cheese just doesn't melt very well and the flavor isn't often very good. That just isn't the case, here - the cheddar is sharp and savory and the Jack clearly helps with the creamy mouthfeel. Add a touch of onion and garlic and you have truly one of the best breakfast meals we've had here at Dr. Gourmet.

I want to make a special point of the numbers: the Roasted Chile & Cheese frittata has 200 calories - about 65% more than the Spinach & Roasted Tomato version - but only 65% of the other's sodium (Roasted Chile & Cheese: 190mg sodium with 5g fiber and 12g protein; Spinach & Roasted Tomato: 300mg). First, it's true that spinach needs a bit of salt to really bring out its flavor. Second, foods with stronger flavors, like roasted poblanos, will often get by with far less salt. Something to keep in mind for your own cooking.