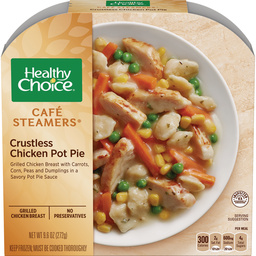 It's a little dismaying, reading the list of nearly 75 items we've reviewed from Healthy Choice: the vast majority of them are labeled "don't eat." I puzzled over this. From my (and our panel's) admittedly anecdotal experience, it seems that overall, frozen meals have been improving in quality and flavor over the years.

Sure, there are those newer brands, like Saffron Road or Sweet Earth Foods, that are exceptional, but they're still smaller, newer companies. Two of the three heavyweights of the frozen food world, Lean Cuisine and Weight Watchers, do seem to have improved over the years. Yet it would seem that Healthy Choice hasn't. Today's reviews suggested a reason why.

In shopping for the products for today's review, I'd fully expected to have to revisit some variety from Healthy Choice that we'd reviewed before. While I prefer to review new products, we do try to keep our reviews fairly current, and that means revisiting varieties we tested as many as ten years ago. I was honestly a little surprised to be able to walk up to the freezer case and pluck completely two new varieties from the shelf.

First up for our tasting was the Crustless Chicken Pot Pie (300 calories, 600mg sodium, 3g fiber). 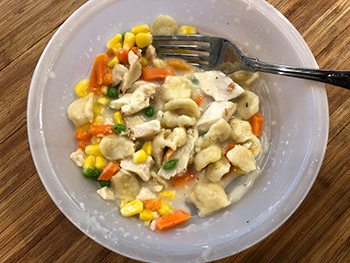 But if you looke closer, the dumplings "look like freezer-burned orecchiette pasta," said another panelist, referring to the pasta variety shaped like little ears. Indeed, they do have that flattened oval shape, but worse yet, they're chewy and tough like freezer-burned pasta. These are dumplings? "I thought dumplings were supposed to be pillowy?" another panelist wanted to know.

On the positive side, the chicken, although obviously processed and bearing fake "grill marks," is tender and has a savory chicken flavor. The peas are sweet and crunchy, as are the carrots. But the corn is oddly flavorless: we'd expected a pop of sweet corn flavor with each kernel, but... nothing. The "pot pie sauce" is no better, appearing to be nothing more than weak chicken broth and cornstarch despite the evidence of the nutrition information.

It's not bad... it's just not very good. And it's certainly not worth the $3.49 we paid for it at our local Rouse's, when other frozen meals are far better for not much more money. 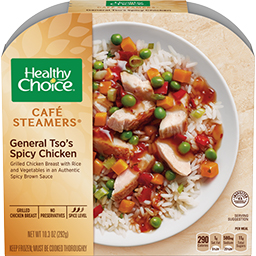 The General Tso's Spicy Chicken (290 calories, 580mg sodium, 3g fiber) engendered some amusement from our panelists. They looked at the description on the box: "Grilled chicken breast with rice and vegetables in an authentic spicy brown sauce," and laughed. 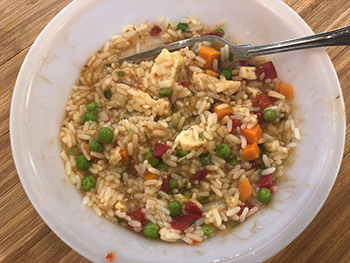 On the plus side, the peas, carrots, and diced red bell peppers are sweet and crunchy. The [processed] chicken is fairly tasty. As you might expect with white rice in a frozen meal, it's overcooked.

It's the sauce that makes (or doesn't) this dish. The panelists called it when they labeled the sauce "generic," and that's just how it tastes. While the sauce certainly has some burn - it's labeled 2 chili peppers out of 5 on the box - that's really all that it has beyond an oddly sweet aftertaste. There's ginger and soy sauce in the ingredients list, but neither is present in the actual tasting.

If you like spicy food, you may enjoy this, but it's one-dimensional: spicy for the sake of spicy. We give it a thumbs down.

And that may be why Healthy Choice products don't fare well with the Dr. Gourmet tasting panel: the panel felt that both of today's varieties were overprocessed, leading to a loss of flavor from what should have been quality ingredients. Nor were they well planned in terms of flavor. Neither came close to capturing the interplay of flavors that make up a good Chicken Pot Pie (with crust or without) or a plate of General Tso's Chicken. Better (and cheaper) to have a peanut butter and jelly sandwich or other easy-to-make sandwich than to buy these disappointments.