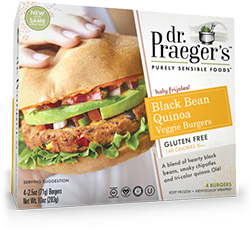 One of our readers wrote to us a few months ago to ask that we review Dr. Praeger's Purely Sensible Foods. "What products do you particularly like?" we asked. "Veggie burgers and veggie pancakes," was the reply. We'll keep the veggie cakes in mind for the future, if we run across them, but our local Whole Foods Market had three veggie burger varieties on the shelf that were also gluten-free. (If you have an item you'd like us to review, let us know about it by sending an email to [email protected]. If we can find it and it fits within our guidelines for calories and sodium, we'll give it a try.)

As a brand, Dr. Praeger's Purely Sensible Foods is new to us. According to their website, the company was founded by two cardiothoracic surgeons who decided to form a company to "offer food that tasted so good it'd be much easier to help people to adopt better eating habits." (I can certainly empathize with that goal!) Their children run the company now, but it's still family-owned and operated, making "frozen foods made from recognizable and pronounceable ingredients." This is certainly the case with their veggie burgers, which (in today's varieties) range from 120 to 140 calories and between 210 and 290 milligrams of sodium.

When we taste veggie burgers we like to use the recommended method for cooking, whether that's microwaving, baking in a conventional oven, or cooking in a skillet on the stovetop. Dr. Praeger's recommends cooking at 450F for a total of 12 minutes (7 on one side, 5 on the other) "until heated through and well browned." We cooked all three at the same time and tasted them without buns or toppings, as we usually do, because after all, we're tasting the patty, not the sandwich.

Two out of three of these are among the better veggie burgers we've ever tasted. The Black Bean Quinoa Veggie Burger is by far the best of the three, but those who must avoid spicy food should pass on this one: with two kinds of chili powder as well as jalapenos, this has a bit of a kick. The umami of the black beans comes through cleanly and the quinoa gives the patty a nice, firm texture. The bits of corn add a little crunch and hints of sweetness, and a touch of cilantro and roasted garlic rounds out the Mexican-style flavor. This would make a great burger and rivals quite a few of the veggie burgers we've tried in restaurants. 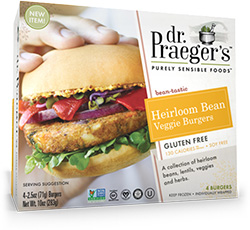 The Heirloom Bean Veggie Burger is made from a mix of 6 different beans (adzuki, pinto beans, great white northern beans, black eyes, red kidney beans, and cranberry beans) along with red lentils, brown rice, and mushrooms. However, the fact is that it tastes like nothing so much as chunky mashed potatoes with onions and oregano. Overall it has a very creamy mouth feel with a few chunks - mostly the white beans. Don't get us wrong: tasting like chunky oregano mashed potatoes is not a bad thing and would still be a great burger, but this is not something that's going to fool a meat-eater even a little bit. 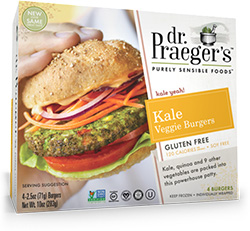 The last burger was, well, we can't say it was disappointing because our expectations were pretty low already. Honestly, we didn't expect much from a "kale burger." Those who really like kale will enjoy this, however. If you took a bunch of kale, sauteed it in a lot of canola oil, then chopped it fine and pressed it into a patty with a little mashed sweet potato as well as spinach, zucchini, broccoli, and parsley, you'd have this veggie burger. Very green in color, tastes like cooked kale, and is more than a little greasy from the extra oil to the point of seeing the grease on the pan. Not offensive, just far more of a vegetable patty (or maybe pancake?) than a veggie burger, with its mushy texture. We're giving this one a thumbs down because we don't feel it's a good "burger," but if you really like kale, you might enjoy this on a bun. It's not for us.