After last week's disappointing offerings from Emeril's Cajun Creations, it was almost a relief to return to the familiar: Lean Cuisine. Their products have been improving fairly steadily, and our panel was curious to see if today's two items, both labeled "Chef's Pick," would fare much better than our last visit with their Culinary Roundtable. Last time was a split decision, with the Thai-Style Chicken and its spicier cuisine doing much better than the too-sweet Glazed Chicken. 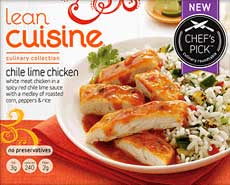 This week we chose to test the spicier item first: Chile Lime Chicken. This comes out of the microwave with a strong aroma of roasted corn, lime, cilantro and red chiles. The rice is just slightly overdone, and as usual would have held up to cooking better if it were brown rice instead of white. (That brown rice also would have given the dish more than the 2 grams of fiber it currently contains.) That said, the rice includes chunks of poblano pepper, red pepper, and roasted corn with lime and cilantro - all in all this has great flavor. The fairly generous chunks of white meat chicken remain juicy after cooking, although that could be due to the volume of the sauce: there's really more than is needed. The sauce has a nice chili pepper zing, but unfortunately it's just a little on the sweet side. With less sauce this might not be so noticeable, but there's so much of it that it tips the dish from good to just OK. With 240 calories and a fairly low sodium level (for a convenience meal) of 580 milligrams, this gets a pass, but only if you can't get our next item. 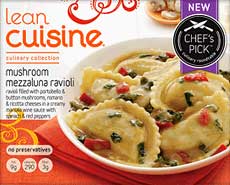 All too often the pictures of the meals on the front of the box bear very little resemblance to what's inside. Usually they look far tastier in the picture. This is one occasion where that's utterly not the case. The picture on the box of the Mushroom Mezzaluna Ravioli looks like the sauce is too thin, too sweet, and has the sheen of cornstarch. There's a few bits of spinach and even fewer bits of red pepper. If meals that met our sodium requirements weren't so (comparatively) few and far between, I would never have chosen to bring this in for testing.

Good thing I did. Before putting this one in the microwave we noted that this dish has lots of big chunks of red pepper and a really surprisingly large amount of spinach. We couldn't even see the frozen sauce for all the vegetables. After cooking and stirring the contents into the sauce (there it was, under the vegetables), we were pleasantly surprised with a savory mushroom and cheese scent. The sauce, far from being thin and sweet, is a creamy, cheesy, well-executed wine sauce that's complemented by the cooked red peppers. The mezzaluna (half-moon) ravioli might be slightly overcooked, but the mushroom-cheese fillings are generous and flavorful. Overall, our panel agreed that this is one of the best frozen pastas we've ever tasted and wouldn't be disappointed to be served this in a restaurant. The numbers are good, as well: 290 calories, 610 milligrams of sodium (again, not bad for a frozen meal), and 3 grams of fiber. Ignore the picture on the box; it doesn't do this meal justice.