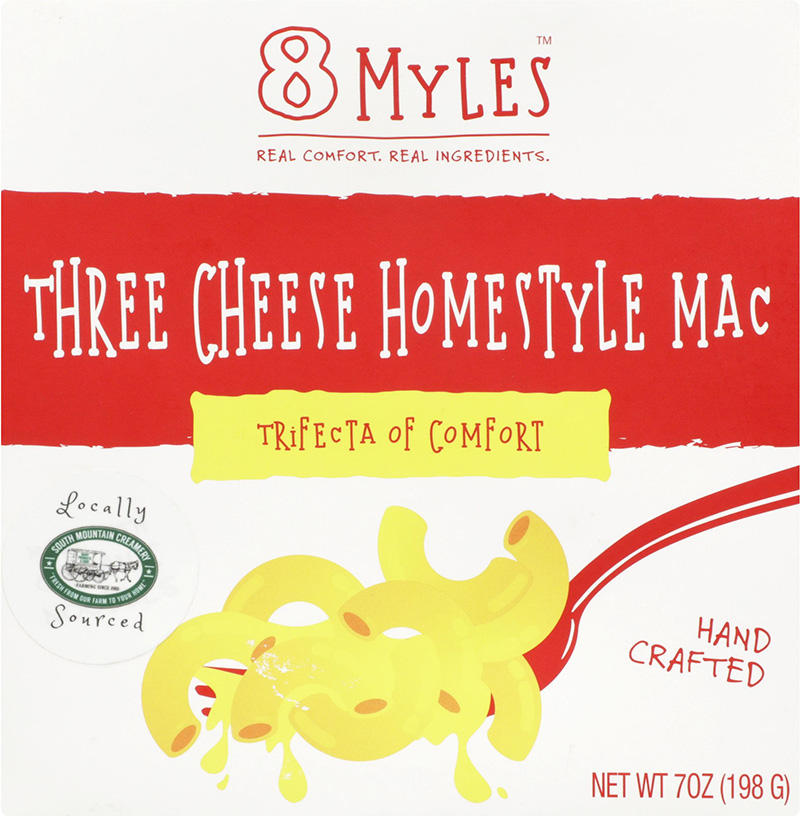 My wife found the 8 Myles brand in one of our local Whole Foods Markets. It bears a "Locally Sourced" sticker on the package, and indeed, it's produced and distributed from Union Kitchen, a "Food Business Accelerator" here in Washington, DC.

According to the Union Kitchen website, "Each quarter, Union Kitchen selects 6 to 10 applicants that have the potential to develop into a $100M consumer packaged good company." They provide mentoring and assistance with distribution and sales to help small food businesses grow into large ones. It's an admirable project and I look forward to finding out more about it.

The 8 Myles brand appears to specialize in mac and cheese, with three varieties - two of which we brought home for tasting.

Naturally we started our tasting with the classic Three Cheese Homestyle Mac, which at first look is promising in terms of the numbers: 420 calories and 580 milligrams of sodium (not a bad ratio of sodium to calories) and a not-unsurprising 1 gram of fiber. As my wife said, "How much fiber do you expect from white flour pasta with nothing but cheese and some panko crumbs on it? It's mac and cheese!"

It is mac and cheese, there's no doubt. My wife said, "This is definitely 'homestyle' - the kind of stuff that kids would love. Tons and tons of cheese and the pasta's a bit overcooked, so the whole thing is pretty ooey gooey."

In our microwave it even came out of cooking with a crust around the edges, just as you'd see in a home-made baked mac and cheese.

The down side, however, is that this is home made raised to the nth degree: there's so much cheese and milk in this that the sauce is not only breaking down but is downright greasy. 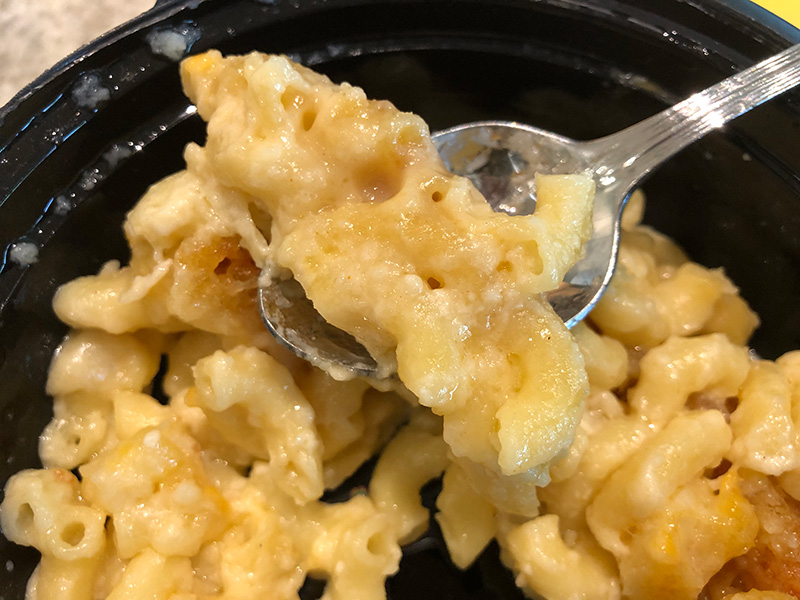 All was explained when we read the ingredients list: the first four ingredients are milk, mozzarella cheese, cheddar cheese, and macaroni pasta - followed by American cheese and heavy cream in fifth and sixth place.

At 23 grams of total fat and 13 grams of fat, this is a greasy, gummy indulgence. Yes, the package claim of "real ingredients" is certainly accurate, but that doesn't make it good for you. 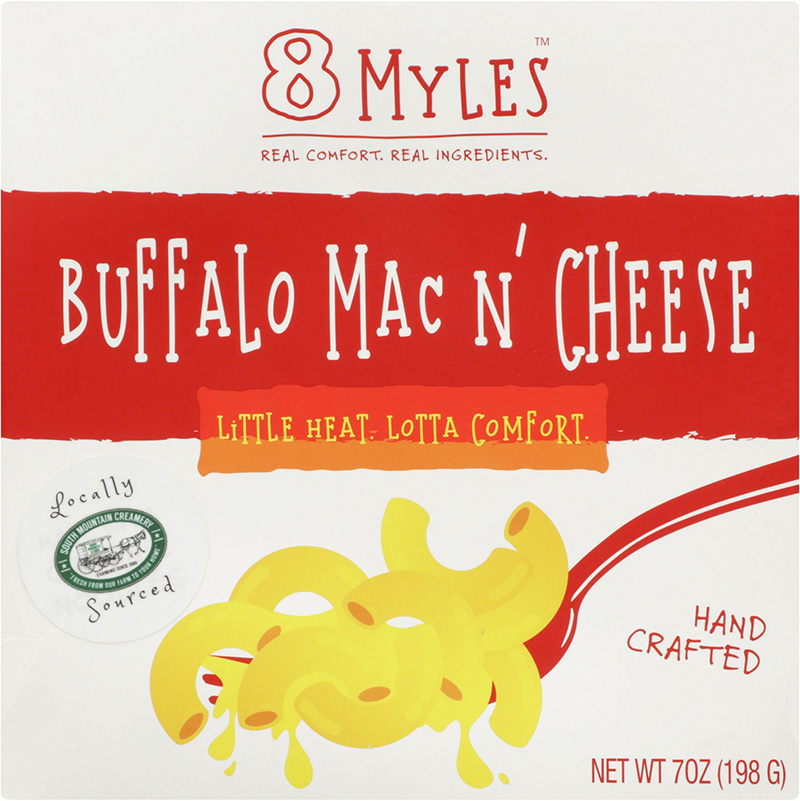 My wife took a bite and said, "Does 'buffalo' mean 'mustard'? This tastes like about the same mac and cheese as the other, but with some mustard on it."

To be fair, this is not quite the same mac as the Homestyle: the ingredients list again starts with whole milk, but second on the list is the pasta followed by "cheddar & Monterey Jack cheese" and.... "pineapple buffalo sauce"?

My wife shrugged and said, "I guess that's not mustard, then, but that's what it tastes like - like there's a half-teaspoon of spicy mustard that was added to this at the last minute."

Otherwise it's much the same, she reported: gooey, overcooked pasta, greasy, "kind of gross," she said, wrinkling her nose. "That mustardy flavor doesn't do it any favors."

As we waited for this to cool enough to eat after taking it out of the microwave, I noted the weight on the front of the box: 7 ounces. 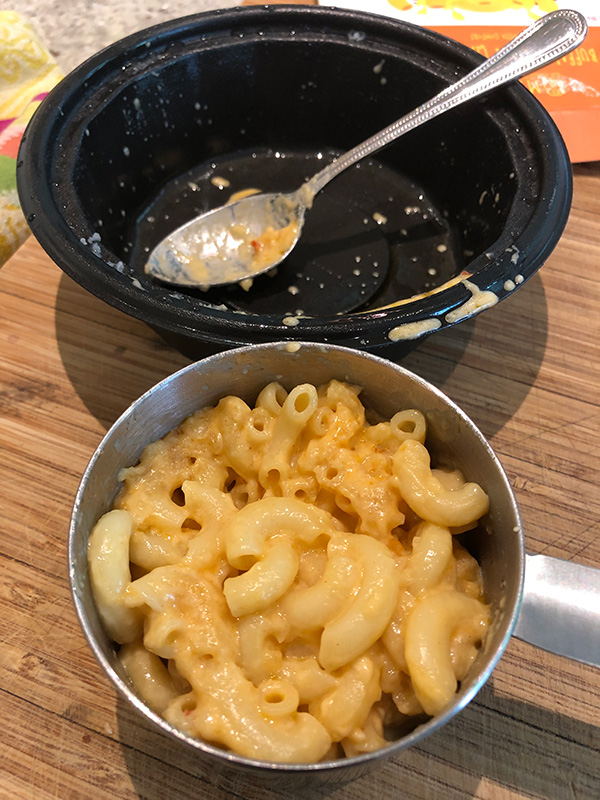 There it is, the entire bowl fits inside my one-cup measuring cup (one cup is 8 ounces) with more than enough room to spare.

This piqued my interest and I did a quick search on other macaroni and cheese frozen dinners. What are their portion sizes?

Here's what I found (the links go to our reviews of the products):

Yet none of those mac and cheeses - that is, those that are significantly higher in fat than their fellows - have received positive reviews from us. Generally speaking, they're greasy, not indulgent.

"You mean it's possible to have too much cheese?" my wife asked. The answer, at least when it comes to frozen mac and cheeses, appears to be Yes. Sorry, 8 Myles. We can't recommend these products.