We first reviewed products from Sweet Earth Foods a little over 6 years ago, in 2014, with their Big Sur Breakfast Burrito and their Baja Breakfast Burrito. These were our introduction to a vegetarian (lacto-ovo) company that has been almost overwhelmingly successful with their burritos, if a little less so with their other offerings, from bowls to empanadas.

While we gave good marks to these breakfast burritos 6 years ago, time and company sales can bring big changes: Nestle acquired Sweet Earth Foods in 2017. We've reviewed a fair number of products from Sweet Earth since 2017: has the sale of the company affected the products originally produced by Sweet Earth?

Starting, once again, with the Big Sur Breakfast Burrito, we can note right away that the Nutrition Information is quite different: today it has 390 calories, 530 milligrams of sodium, and 6 grams of fiber. That's a pretty substantial breakfast burrito. 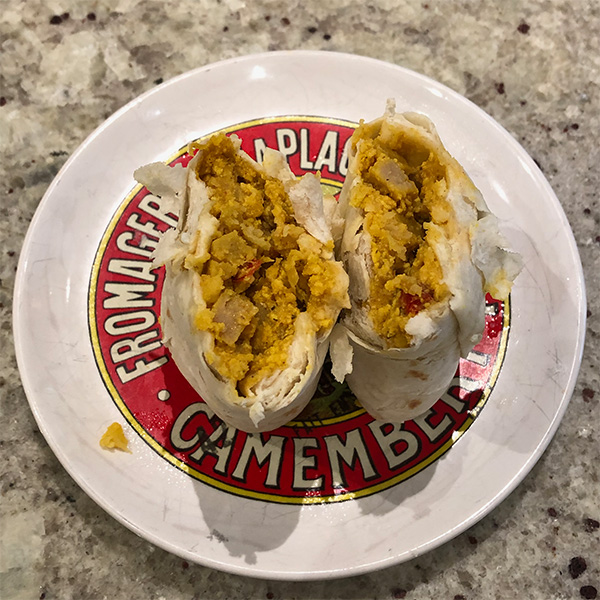 The brown paper these burritos originally came wrapped in fell by the wayside long ago, but the instructions are essentially the same: remove from wrapper, place on plate, cover with a paper towel, and microwave 1 minute on full power per side. Allow to rest one minute and serve.

The Ingredient Information says that this contains potatoes, followed by tofu, seitan, roasted red bell peppers, and onions. The rest is seasonings and the wrap itself.

On the one hand, the potato seems to have been peeled (it wasn't before) and mashed into graininess, while the chunks of seitan now provide more of the burrito's texture and are more assertively flavored with "smoke flavoring" that gives the whole a bit of a sausage-y flavor. Diced red bell peppers provide sweet touches in counterpoint.

While this is labeled a "breakfast burrito," there are no eggs to this and the color to the filling is more of a turmeric or cumin-colored yellow - I doubt anyone will be fooled into thinking this might contain egg (not a criticism).

The tortilla wrap is as tender, soft, and non-slimy as we've learned to expect Sweet Earth to provide, and it passes our handheld burrito test quite well. As before, it's a burrito full of filling, not wrap. Overall, a good vegan breakfast burrito. I'm particularly impressed that 6 years ago this burrito had fewer calories, slightly more salt, and less fiber at 280 calories, 540 milligrams of sodium, and 4 grams of fiber.

This is a bit more traditional breakfast burrito, with hard-scrambled eggs mixed with chunks of potato, chipotle-flavored seitan (in place of sausage or bacon), beans, and Monterey Jack cheese.

The chipotle seitan is definitely the dominant flavor here - and there's enough spice to leave a little tingle on the tongue. 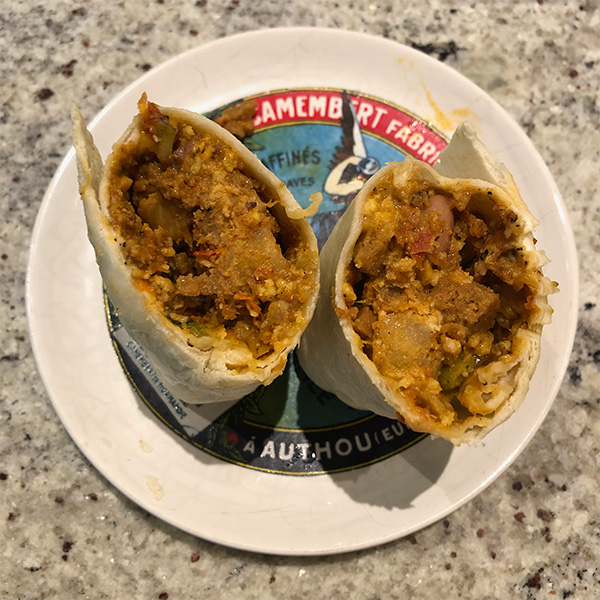 The potatoes are cut in substantial chunks and quite tender, and there's sweetness from roasted tomatoes along with umami from the beans.

We could wish for a greater amount of scrambled eggs to mellow the spice of the chipotle, but this is still quite a good breakfast burrito.

Are these two as good as they were six years ago? It's hard to say. We remember being more extremely impressed - but these were the first two products from a company that's had a better track record than most. Still good - and that's more than we can say for other, small companies who were bought out by larger companies.