I was at the store the other day looking for things to review when I saw today's products from Emeril's Cajun Creations displayed next to other local food lines. I've looked at the nutrition information on these other lines, and as is so often the case, the levels of sodium in these meals are just appalling. I'd assumed that this was also true of Emeril's products as well, but for some reason I stopped and looked more closely.

I was surprised to see that the sodium levels on both of the meals we'll review today are under 500 milligrams. That's not bad at all - and if that means people can get the flavors of New Orleans out of the freezer case, this could be a real find. When I tell people that I live in New Orleans, they almost invariably tell me how much they love New Orleans food. How nice it would be to tell them that they could get good New Orleans food out of the freezer case! So I brought them home to our tasting panel for judgement. 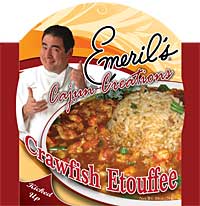 The first one we tasted was the Crawfish Etouffee. Just out of the microwave this looks much more like a soup than the etouffees I'm used to, but whether your etouffee is less or more soup-like is a matter of the chef's taste. As the label says, this is indeed "kicked up" - it's spicy enough to make the nose run of at least one taster. We'd expected the crawfish tails to be rubbery, but they weren't. All in all, the panel agreed that this tasted a lot like the crawfish etouffee you could get at any of the more casual eateries in the French Quarter - pretty good, but not great.

Something about its consistency bothered me, however. The rice that is so much a part of etouffee wasn't very obvious to the eye. Was the rice just overcooked into invisibility along with there not being very much of it? A careful check of the ingredients list solved the question of how an etouffee could have only 130 calories and only 1 gram of fiber: there isn't any rice in it. None. Zero. The product picture on the box should be labeled "serving suggestion," because it shows rice in the etouffee. How can you have crawfish etouffee without rice? 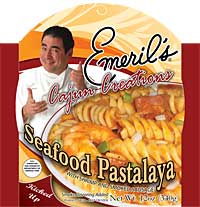 Disappointed, we turned to the Seafood Pastalaya. This dish smells almost overwhelmingly of smoke flavoring (the package does say "smoke flavoring added") and that extends to the taste of the dish, as well. While the sausage chunks are of reasonable size, the shrimp were nearly invisible, they were so small. Unlike the crawfish in the etouffee, these didn't survive the cooking process very well and in addition to being about the size of pencil erasers, they had a similar consistency. What was worse was that the pasta broke apart with the required stirring until you ended up with a plate full of pasta bits. I've had rice pastas that didn't shatter like this. The label says that this contains 480 milligrams of sodium, and you can taste every single one of them.

As we were cleaning up from the tasting, my wife looked at the nutrition information once again. "That's funny," she said. "The 'Servings Per Container' line isn't filled out. It's just blank."

She was right. On both packages, the Serving Size is given in grams, but the Servings Per Container, which should say "1" for a single serving package, is utterly blank. I looked at the front of the packages again, where the package size is given in both ounces and grams, and that's when it dawned on me: these are actually TWO servings.

Two thumbs way down for Emeril's Cajun Creations. You'd do better to make your own Shrimp Etouffee, Shrimp Jambalaya, or Jambalaya Salad.